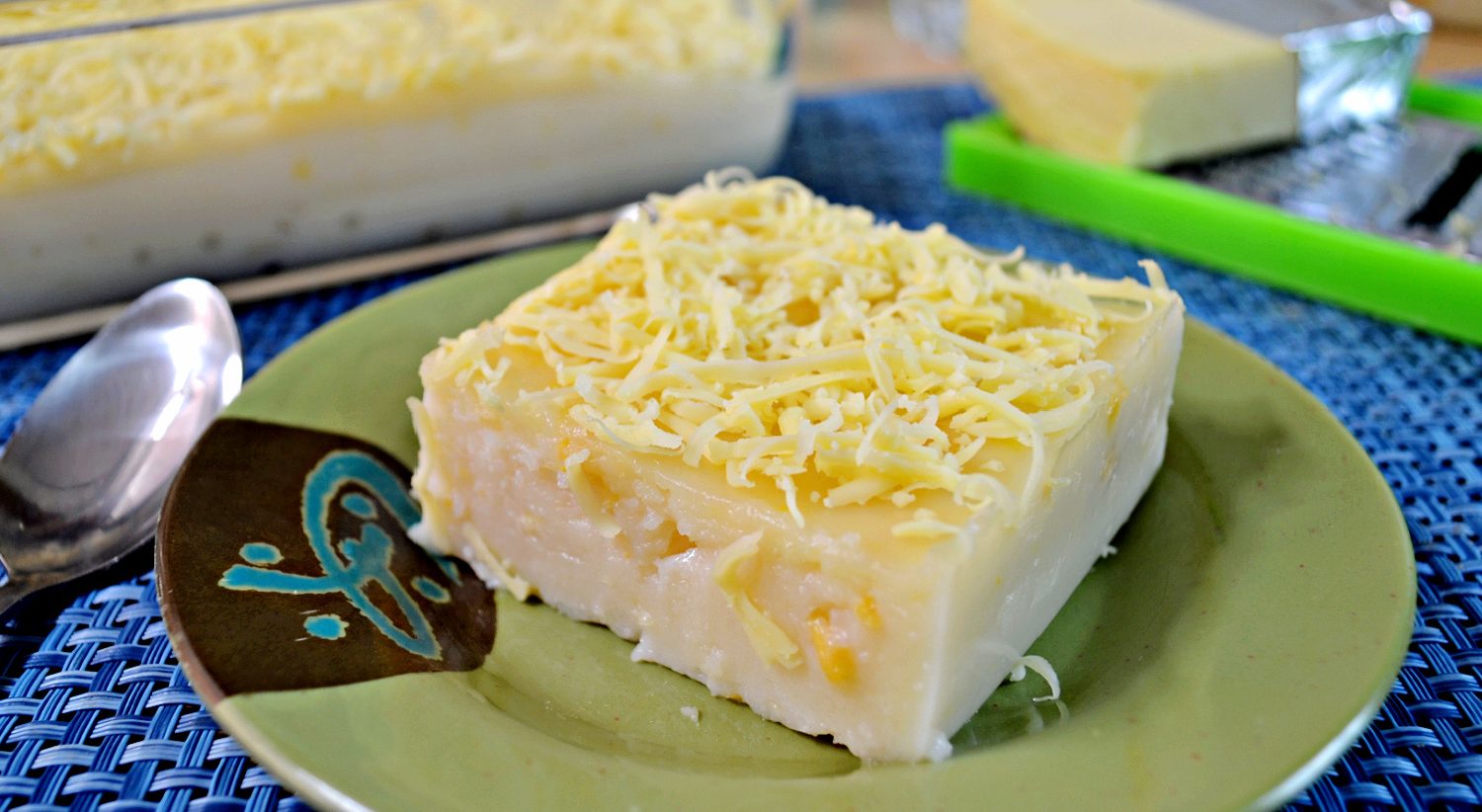 By YUMMYKITCHENPosted on October 20, 2020November 8, 2022
Jump to RecipePrint Recipe

Maja Blanca is a Filipino Coconut Pudding is made by boiling a mixure made with coconut milk, evaporated milk, condensed milk, caned corn, sugar and corn starch. Normally it has ben topped up with caramelised coconut or cheese. In earlier days Maja Blanca did not include corn and milk, but these were added later to improve flavour and texture. This yummy Kitchen maja blanca recipe will guide you step by step to make very delicious and scrumptious Maja Blanca.

My mother used to make Maja Blanca during special occasions. I remember sneaking in the kitchen when no one was around and grab a spoonful of the Maja blanca my mother kept in the fridge. She used to top it with grated cheese. She then tells us to wait for a few hours before digging it. I don’t think the word “wait” is included in a child’s vocabulary. At least, it wasn’t included in mine and my siblings.

I like having my maja blanca with corn. I also love topping it with grated coconut or cheese curl crumbs. When I feel a bit adventurous, I also add a bit of chopped bacon on top. The possibilities are endless!

You can also use “latik” as toppings for the maja blanca. That’s usually the toppings you can find from those street-sold Maja Blanca. While that is the “traditional” toppings, you can try different ones as per your liking.

How to Make Corn Maja Blanca

Simple maja blanca recipe is probably one of the first few recipes I’ve learned when I was young. The recipe is pretty simple and the ingredients required are only few. This is my go-to recipe when I want something quick to make for simple or special snack.

Basically, you start by combining all the ingredients in a pot except the cornstarch and cheese. After combining, let it boil for a few minutes until the coconut milk is cooked. While waiting for the mixture to boil, dissolve the cornstarch in a separate bowl. This will then be added to the mixture when it boils.

When adding the dissolved cornstarch, the hard part will start. This is where you need to stir the mixture nonstop as it will start to thicken up and becomes stickier. You will keep stirring until the mixture becomes smooth. Usually, the cooking time after you add cornstarch is around 8 to 10 minutes.

Once the mixture becomes smoother, time to transfer it to your tray or container. You have to be quick in doing this as it will set fast. Be sure to smoothen the top as soon as you pour it for even-looking top. Let it cool before putting any toppings.

HOW TO COOK LATIK

As mentioned, latik is also a yummy option for toppings. Cooking latik is very simple. You will just need around 1 cup coconut cream or pure coconut milk. Cook in low heat until it starts to curdle and the oil begins to separate. Cook it more until the curds turn light brown. Separate the oil from the curds by straining. The brown curds are the latik.

Watch how to cook Maja Blanca