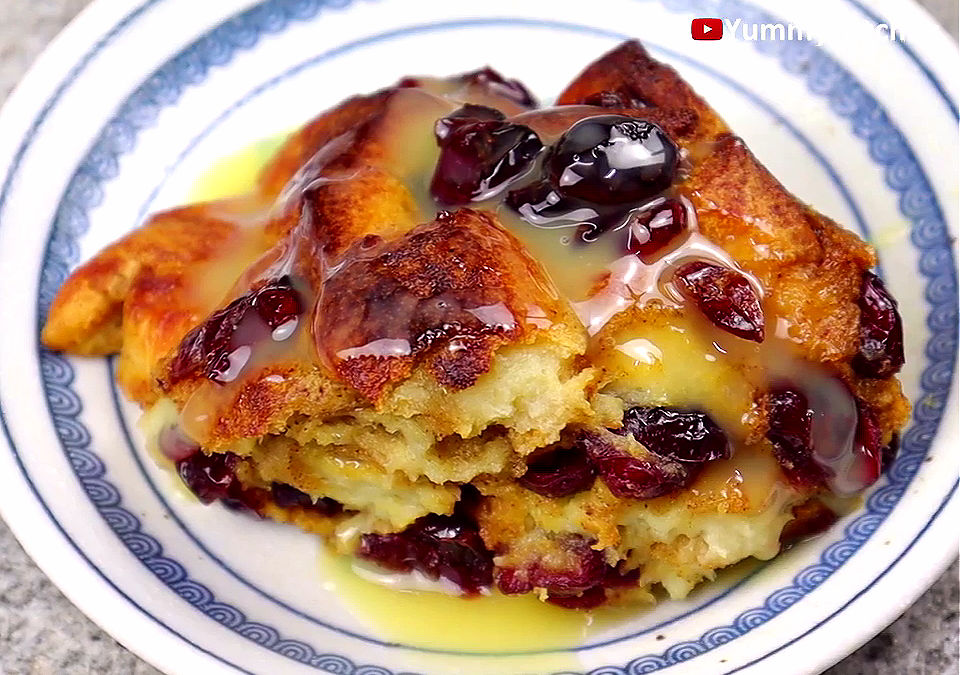 Transform your leftover breads into a delectable and lovely dessert everyone will surely like! Use your loaf breads in a new and fun way by making a cranberry bread pudding! This bread casserole has a crispy top with a soft and milky bread which will surely satisfy your sweet tooth. Drizzle some condensed milk in it and you will surely go crazy over it!

The story on how bread pudding was invented is very simple. As bakeries prepare a lot of breads every day, not all breads are sold. These breads became stale and hard which is totally unappetizing and unenjoyable to eat. The people who invented bread pudding searched for ways on how to use these leftover stale breads. The original bread pudding used stale breads which are soaked in a mixture of milk, sugar, and eggs, and then baked. Some even call bread pudding “a giant French toast casserole” since it uses almost the same ingredients in making the famous French toast. The classic version of the bread pudding is the plain sweet one. Modern versions included flavorings like nuts and berries and even pumpkin.

It is amazing how leftover bread was transformed into a wonderful dessert and is now popular all over the world. And just like how it started, I made my very first bread pudding when I had an excess supply of loaf bread from my niece’s birthday celebration. If you regularly buy loaf bread for your personal pantry, you would know that a loaf bread commonly expires within 1 to 2 weeks. With the urgent need to use those breads, I decided to try and make a bread pudding. My first try is a bit of a failure since it tasted too eggy. But since I have a supply of bread, I took that as an opportunity to formulate the best bread pudding recipe.

The bread pudding is a blank canvass in which you can experiment with different flavors and toppings. From all my trials, some of my favourites are the cranberry and chocolate-chip flavoured one. If you’re interested in making a cranberry bread pudding, I’ll share my exact recipe and feel free to try it on your own.

HOW TO MAKE BREAD PUDDING

As bread pudding was compared to a French toast, you will have some ideas on how to make this wonderful dessert. For a quick overview, the bread will be soaked in a sweet custard mixture and will be baked to perfection. The major ingredient in this dessert is the bread. As mentioned, the classic pudding uses stale bread. As the stale bread is hard and dry, it can hold its shape easier and can soak a lot of the custard mixture. I actually did an experiment using stale bread and fresh bread. The fresh bread easily becomes mushy once soaked even with my utmost carefulness. But if you really wanted to make a bread pudding but only has fresh bread available, you can simply heat your cubed bread in the oven to dry it out a little.

Now let’s have a talk about the sweet custard mixture. If you want a sweeter pudding, use evaporated milk instead of plain milk. Beware on the amount of liquid you are going to soak your bread. Too much milk will make your pudding too soft and watery. Adding to much eggs will make it taste like omelette. In my bread pudding, I used cranberries. You can also opt to use raisins, coconut, nuts and even chocolate chips. The amounts of the ingredients in this recipe have been tried and tested for a lot of time so just follow this to have a 100% no-fail bread pudding.

After the bread soaking session, the last thing to do is to bake. Unlike other casseroles, you will need to place the baking pan in water so that it wouldn’t burn, especially that you used milk in this dish. Serve your bread pudding straight out the oven if you prefer hot pastry. Drizzle some condensed milk on top for some added heavenly sweetness. You can also try adding a scoop of vanilla ice cream on top while it’s hot. The combination of the hot bread pudding and cold ice cream will surely burst in your mouth!