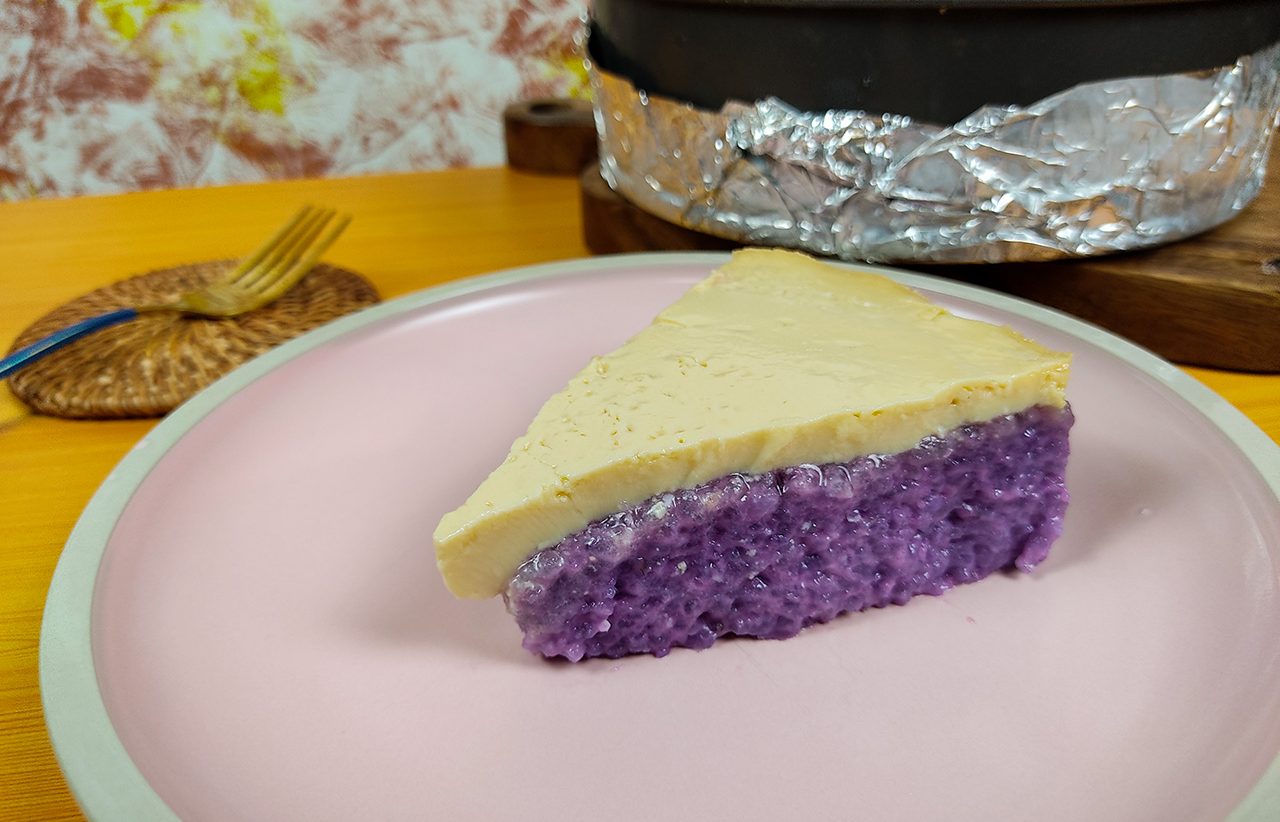 Ube Biko is a popular dessert made with glutinous rice, sugar, coconut milk,salt and ube food flavour and topped up with a custard flan made with egg, evaporated milk and condensed milk. Ube food flavour is added to give the dessert a ube look and aroma. This yummy kitchen Ube Biko with Custard Flan, is really smooth and creamy kakanin in one! Your favourite biko is heavenly flavoured with the classic ube and is topped with some creamy and milky custard flan on top.

Biko is a type of kakanin or rice cake which is very popular in the market. With the variety of all the kakanins in this beautiful country, kakanins might sometimes be confusing.If you see a kakanin which literally looks like cooked sticky rice, then that is the biko. The biko is usually brown in color and is topped with latik.

Biko is one of my favorite kakanin ever since I was a child. The child me said that biko lived up the name “kakanin” because you can literally see the rice grains in there! Until now, biko is one of my top choices when buying some kakanins in the market.

We usually go market shopping whenever I go to Batangas to visit some of my relatives. Of course, the kakanin lane is a must. At first, there was a bit of confusion between me and ateng tindera as “sinukmani” is the term they use in Batangas for biko. Ever since this happened, I make sure I activate my Batangueno language every time I go there.

With the popularity of the biko, this kakanin has now evolved into different classic flavors like ube and pandan. Is ube one of your favorite flavors? In this recipe, you will know how to make the ube variant of the biko.

But wait. There’s more! This biko is not just ube in flavor. It is topped with your favorite leche flan! Two favorites in one! Instead of the usual latik, this ube biko is topped with some smooth and creamy custard flan.

I usually make a small container of biko for meryenda purposes. This kakanin truly is a great partner for your afternoon tea or coffee. If you wanna know how to make some ube biko with custard flan, read and follow the simple recipe below. Happy cooking!

HOW TO MAKE UBE BIKO WITH CUSTARD FLAN

Making biko is easier than other kakanins you know. It may look tedious since you usually see them in large bilaos. But when you make a smaller batch, you’ll realize how easy this Pinoy sticky rice cake can be made.

For this sweet treat, the two components would be the biko and the custard flan.

Start with the biko. Prepare the glutinous rice and cook just how you cook your normal rice. Just look after the dish from time to time to prevent burning or having the bottom burnt (tutong). When the rice is ready, simply combine it with the heated ube coconut sauce. This mixture will be wet at first, but as you continue stirring, the rice will absorb the coconut sauce and you will end up with some purple sticky and thick mixture. Transfer the ube biko into a steamer-friendly container.

For the custard flan topping, the steps will be similar to making the classic leche flan. Simply combine the leche flan ingredients and strain for a few times to make sure that it will end up smooth and creamy.  Pour this on top of the biko and then steam.

Steaming may take up to 1 hour, just enough for the custard flan to set. Do a taste test or the toothpick test to check this.

I used a round pan for this ube biko with custard flan recipe. After refrigerating for a few hours, this native kakanin with a twist can be a great substitute for a cake! If you’re gonna do this, make sure to experiment with more toppings. Yum!