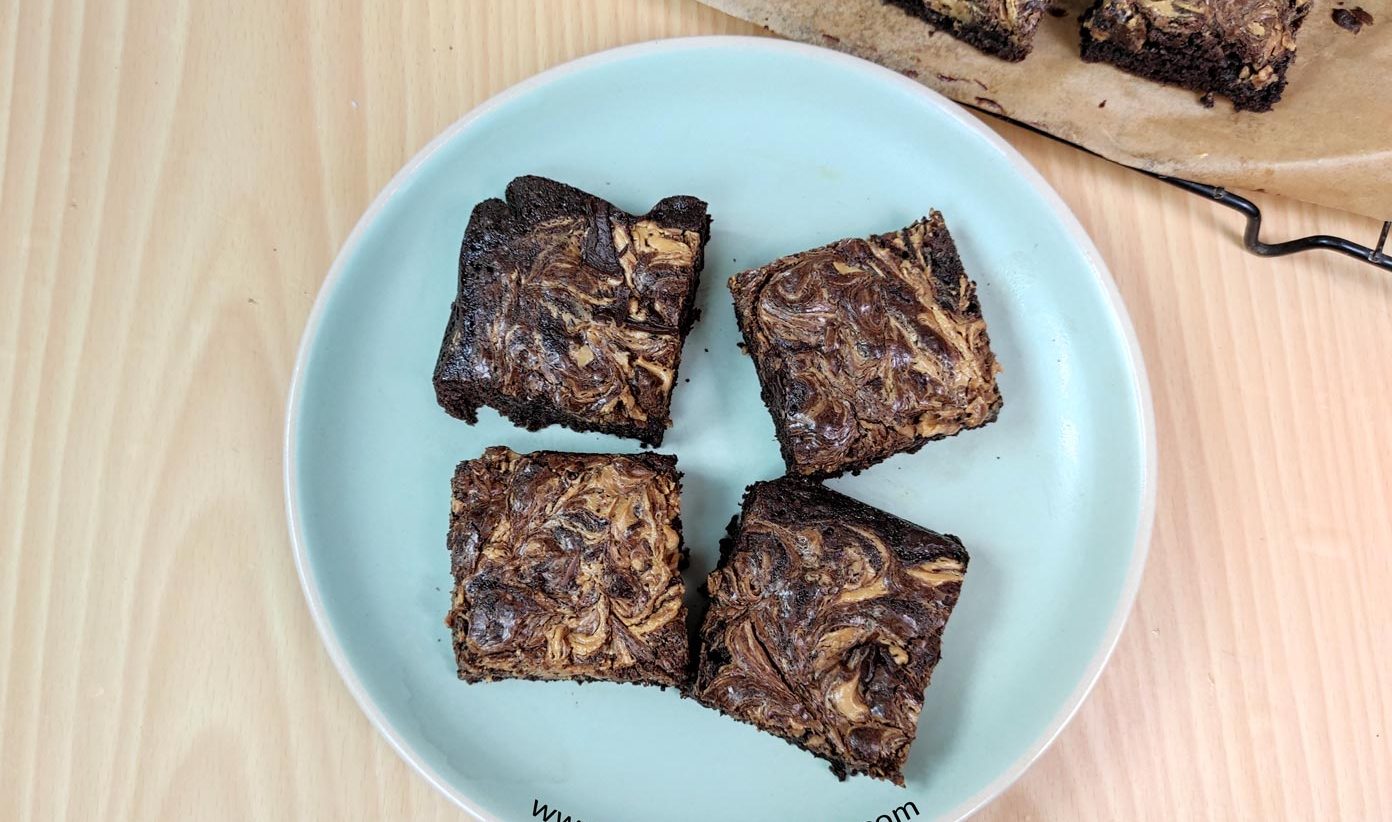 These gooey chocolate-y sweet and nutty mix of extravagant and indulgent. These Peanut Butter Brownies recipe is the best snack, after meal dessert, or just a simple easy to take a bite of energy booster that is so amazing you wont stop with just slice! Let yourself just chill back and relax and get a mini sugar rush with these fudgy brownies with a beautiful simple but fancy looking peanut butter marbling.

Why do people love Peanut butter?

Why do people go buts for peanut butter? Spread it on bread by itself, used with a combination of jam or jelly, added into desserts and even in savory dishes to give it that nutty taste.  Peanut butter is so beloved that it even has its own day celebrated at every January 24th. Peanut butter isn’t just beloved for its flavor; there are actually a lot of health benefits as well as environmental benefits with raising peanuts. One such example is that Peanuts are nitrogen fixing which are beneficial to the soil. These are rotated with other plants as they help mitigate soil erosion and degradation. It takes around 540 peanuts to make ajar of peanut butter. For a food that eaten around 700 million pound annually from America alone, the many uses, benefits and dishes that it’s been added to, its pretty clear that peanut butter has become a beloved staple by many all around the world.

How to make these Brownies?

Sometimes we just need that chocolate fix to keep us going through the day. A sweet little treat that will not just wake you up with a bit of sugar rush, but something to look forward to after a hard day’s work. We recommend trying out this peanut butter brownie recipe that’s so simple and easy and utterly delicious, it can be kept anywhere and can last you some time in the fridge, you’ll just need to stock up over the weekend to make sure that it’ll last you the whole week! All you need to do is mix up some sugar and melted butter in a bowl, make sure the butter isn’t too hot that it might cook the eggs once you add them. Whip up the eggs one by one making sure all these are well combined. Sift in some flour and cocoa powder, doing this makes the butter less clumpy, fold these instead rather than whisk to avoid over mixing which might make it more cake like rather than brownie like. add in some vanilla for aroma, chopped chocolate for extra depth and more chocolate taste, it also makes it fudgy, add in some peanut butter as well to make it mesh well together later. We recommend you to use your favorite peanut butter in this recipe, just make sure that the peanut butter is not too liquidly to avoid any oils from the peanut butter from coming out and making the batter separate with each other, this may excrete too much oil or may make it hard for the batter to become solid. Bake it in the over for some time. If you want a cake-y or less fudgy brownie, but still have it moist make it for a little longer, if you want that really fudgy and goeey brownie, bake it for less time and let it cool at room temperature than in the fridge for some time. Slice these to squares and take a bite! Serve it with some ice cream to make the day look even better!

Satisfy your afternoon sweet cravings with a bite of these Peanut Butter brownies, that aren’t just easy to make, they’re seriously so delicious you won’t want to share!

These delicious treats of chocolate with a swirled creamy peanut butter marbling are richly decadent with each bite! Who doesn’t want a chocolate desert that’s not just simple and easy to do but just needs a number of 8 ingredients to make? These not only come out delicious but also beautiful and aesthetically pleasing. All you need to do is mi all the ingredients together, pouring it in a pan to bake and they’re ready to serve! Make these even more delicious by adding a drizzle of chocolate or a scoop of ice cream!