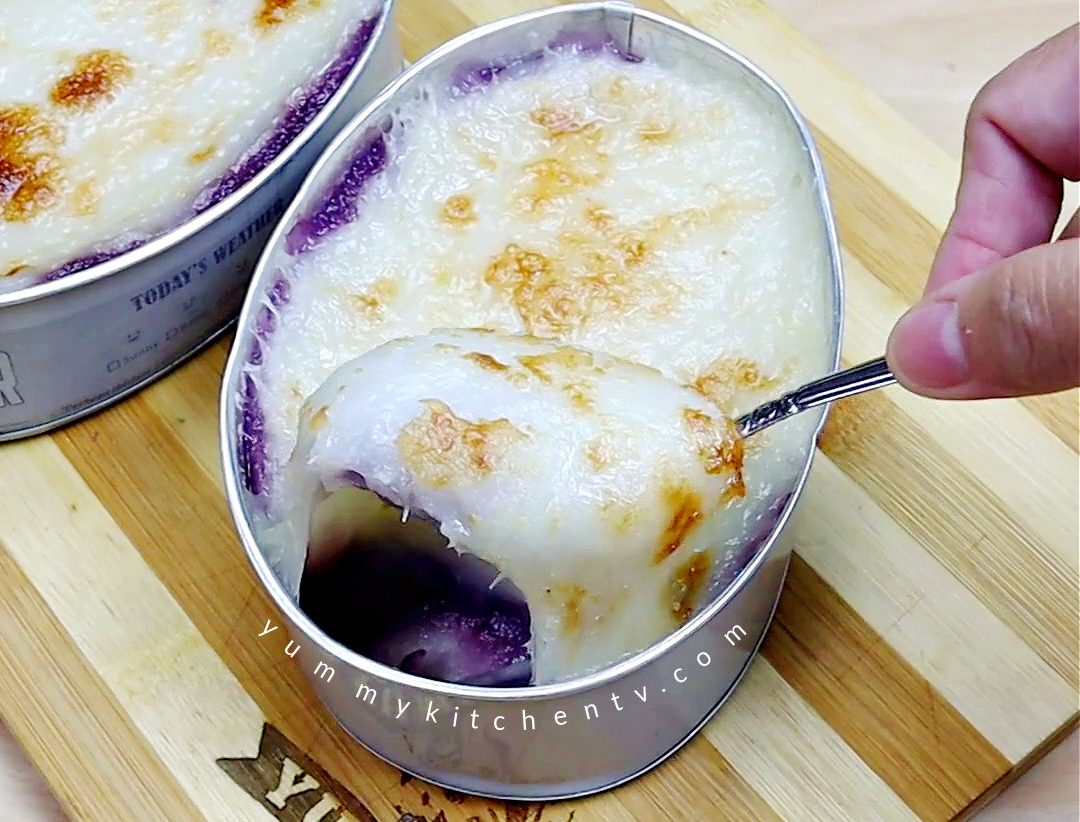 Inutak is a Filipino sweet dessert from “Galapong”, made with glutinous flour, coconut milk, sugar, ube halaya, ube flavouring and coconut cream. the above prepared Inutak cake is baked in a baking pan known as llanera. This snack is called inutak since the caramelized coconut cream on top resembles a brain or “utak”.

The first time I offered this snack to a friend, she got shocked. My friend was from another place and she had never heard of inutak. Her initial thought was that inutak was a meat dish made from brains of some animals. I laughed for a full minute before I revealed to her that inutak was a kakanin.

This Filipino delicacy is quite less known but is similar to other kakanin which were made from glutinous rice cake. It is made with 2 layer of glutinous rice mixture, a sweet white one and an ube flavoured one. It is first cooked in a stove and is finished in the oven. Some might confuse it with sapin-sapin but the inutak has this distinct top layer. This sweet and sticky rice cake is called inutak for a reason. The caramelized top of the inutak seem to resemble a brain. This makes sense as the root word for inutak is “utak” which is the Tagalog term for brain.

If you got curious of this sweet kakanin, try one now and follow the recipe below. Happy cooking!

To start the inutak, just mix the sugar, glutinous rice flour and coconut milk in a saucepan (without heat). Heat the pan and stir continuously. This will be your white sweet glutinous mixture. To make our inutak more colourful and appetizing, we will make an ube version of the glutinous mixture. Reserve the half of your white glutinous mixture. The half remains in the pan and will be mixed with ube flavoring and ube halaya until well-incorporated. An ube jam will also work if you have no ube halaya available. The next thing you need to do is to layer the two gorgeous glutinous mixtures in a container. Unleash the creativity in you! Inutak is usually just two layers but I know some who put a lot of effort and made a lot of layers of alternating white and purple mixtures. The very last step you need to do before you enjoy the inutak is to pour some coconut cream on the top of the inutak. Bake the inutak in the oven until dark spots appear on top. These are the caramelized cream which they say resembles a brain. If you have no oven, you can simply use a blow torch to caramelize the top. And now you’re done! Have your inutak with a cup of coffee or tea. Enjoy!

How to Cook Inutak (TAGALOG)