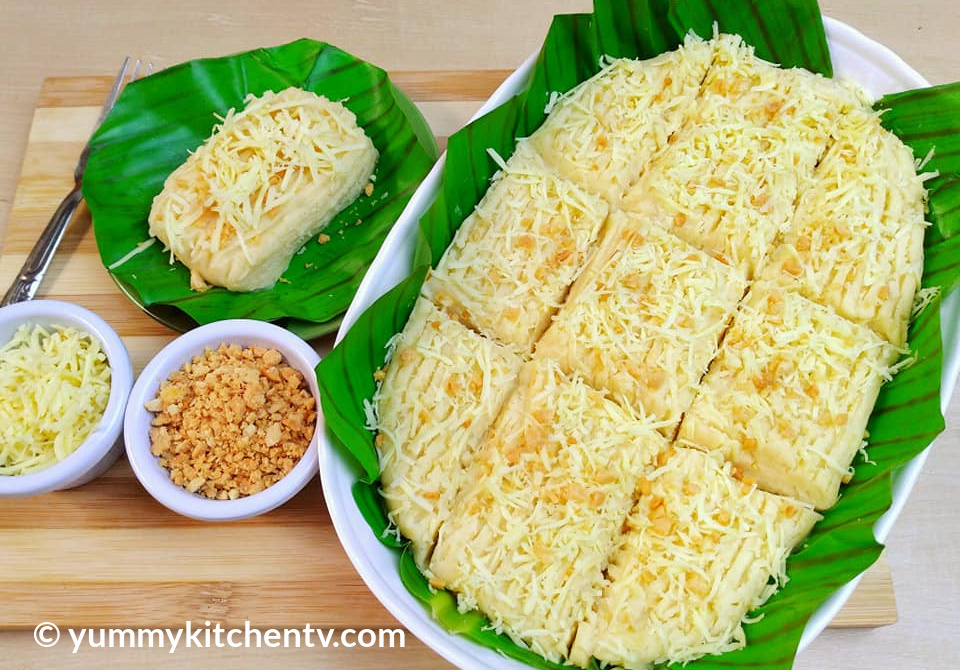 Nilupak is a Filipino sticky rice cake prepared by mashing and pounding sweetened cassava. It gives a soft and creamy feeling with hints of love and sweetness. This kakanin is usually topped with grated cheese which compliments the sweetness of the soft rice cake. It is commonly eaten as a midday snack or an afternoon dessert. One bite of this soft snack will melt your heart and will leave you wanting for more.

Nilupak is a native delicacy from the beautiful province of Batangas. The root word of nilupak is “lupak” which means “to pound”. It has been used as a general term for kakanin which are made from pounded starchy foods. Nilupak can also be called with other names such as nilusak, linusak, niyubak, linupak, or lubi-lubi depending on the dialect used. The traditional way of preparing nilupak is by pounding the starchy food using lusong or a giant wooden mortar and pestle. The process of making nilupak has only few steps but the pounding is too laborious, especially when creating large batches. The pounding of the cassava only stops when the mashed cassava is very sticky and has a soft and gummy texture. This process would take you a quite a time. The modern technique of preparing nilupak is by using smaller versions of mortar and pestle. Some people use store-bought grated cassava so there will be less labor on the pounding process.

In this recipe, kamoteng kahoy or cassava will be featured. Other starchy foods commonly used in making nilupak includes ube or taro, sweet potato and saba banana. Nilupak is molded in different shapes and is usually served in banana leaves. The best toppings for nilupak include ground peanuts, grated cheese, softened butter or margarine.

Nilupak only requires a few steps to make. Prepare the cassava by peeling and washing them. Peeling the kamoteng kahoy is not similar to peeling other vegetables. The technique on peeling the cassava is to make a large slit on the cassava skin and then pull it off. When peeled, cut the cassava pieces in the middle and you must remove the root-like part at the center of the cassava since. That part must be discarded since it could not be mashed and could ruin the texture of the resulting nilupak.

When the nilupak is done, transfer to a molder and shape however you like. The classic nilupak is topped with cheese but you can experiment with other toppings like margarine, sugar and ground peanuts.