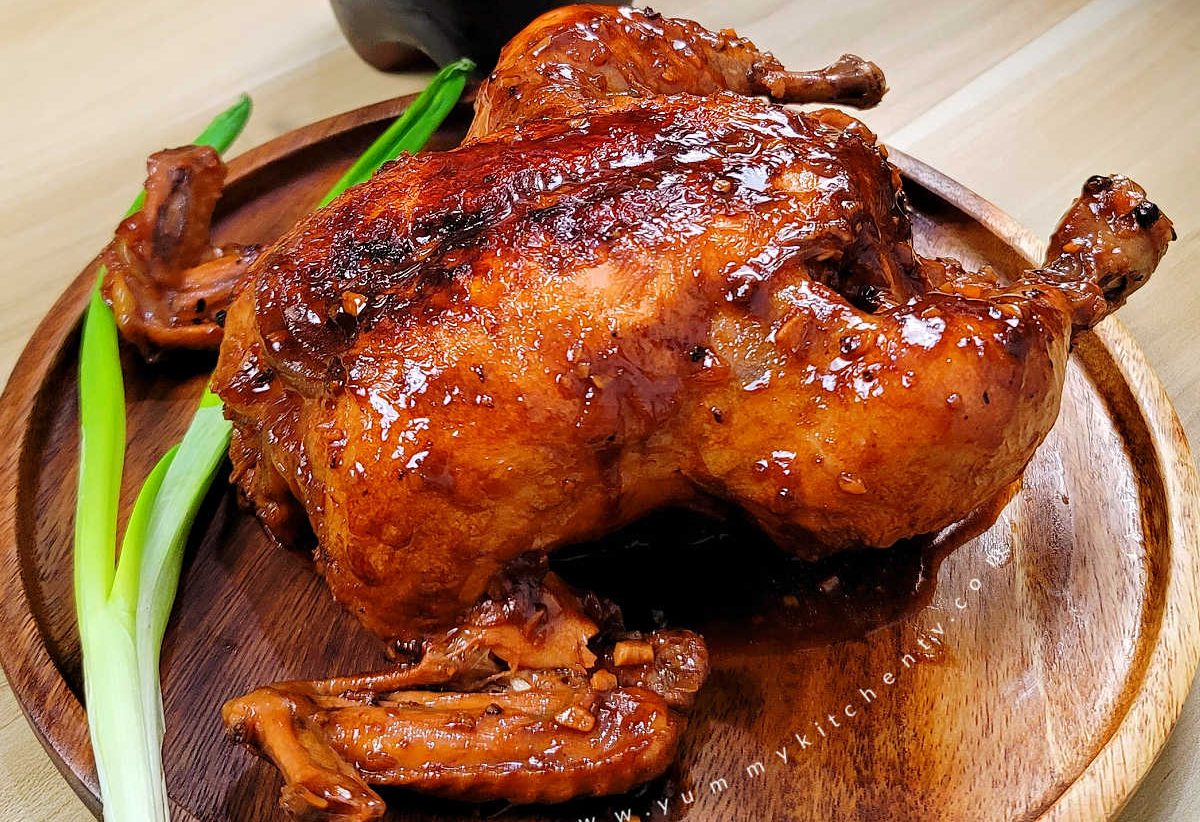 Coca cola Chicken is juicy and scrumptious chicken, coated with sweet and sour gravy made with, coca cola, minced onion, garlic, bay leaves, pepper, soy sauce, ketchup and green onion. The savory sweet and flavorful chicken is best paired with rice of mashed potatoes. Serve a Coca Cola glazed chicken and impress everyone in the family gathering! Totoong sarap to the bones!

Coca Cola or coke is definitely the real deal during the summer. Nothing can beat the heat like an ice cold coca cola drink! Coke has been a popular drink ever since we were born. It is one of the top soda drinks in the Philippines.

Coca cola will be the highlighted ingredient for this dish. The sweet beverage you know will give the caramel-y flavor of our whole chicken. But did you ever get curious how Coca Cola was made?

Coca Cola was originally made by a pharmacist from a chemical company. John S. Pemberton formulated a cure to some diseases. This cure is based on the cocaine from the coca leaf. (Now you understand where the name came from.) Dont panic as the Coca Cola you drink today has no cocaine. Since many people loved the taste of the tonic, it was then reformulated into a soda drink which is what you drink today.

Coca Cola has been a hit since the 1800s up to present. Aside from being a  drink, it is now made and incorporated into other dishes like sauces, ice popsicles and many other. In this recipe, Coca cola will be used as the overall glaze of our whole chicken.

Baked chicken is one of the most common dishes prepared for a family gathering. Serving whole chicken and the family sharing it somehow gives us the warm feeling of being with our family.

I have been preparing whole chicken for our family dinner for quite a time now. Whole chicken is really best to be served when you’re many in the family. Aside from trying different modes of cooking, I was thinking of glazing my chicken up. Glazed chicken gives the impression of being a 5-star restaurant chicken.

Sweet glazes are very popular for chicken. So why don’t we make use of the unique caramel flavor of our favorite Coca cola? This dish is perfect for kids especially that they want almost everything sweet. You can try using other soda except the citrus ones. But nothing can beat the unique flavor from Coca Cola. I usually don’t dry the sauce too much since the kids want some sauce to dip from.

If you want to upgrade your baked chicken into something with a sweet glaze, try this Whole Coca Cola chicken recipe!

HOW TO MAKE WHOLE COKE CHICKEN

Coca-cola Chicken is much easier to prepare than you imagine. This may take more than an hour to finish but the preprations are so simple.

First, prepare your chicken and remove the unnecessary parts. Sear the chicken first, as it helps develop more flavor and seal the juices inside the chicken. The chicken will render a little fat from the searing. Use this oil to saute the aromatics.

Prepare the sauce by pouring the Coca Cola over the chicken. Add the rest of the ingredients to improve the flavor or the liquid. In this recipe, I added green onion stalks for extra spice. You can also use lemongrass. After minutes of simmering, remove half of the sauce so the flavors can become more concentrated. Remember to baste the chicken so it will absorb much of the flavorful sauce. When cooking whole chicken, it is best to have a kitchen thermometer at home. Check the internal temperature of the chicken to know if it has been fully cooked.