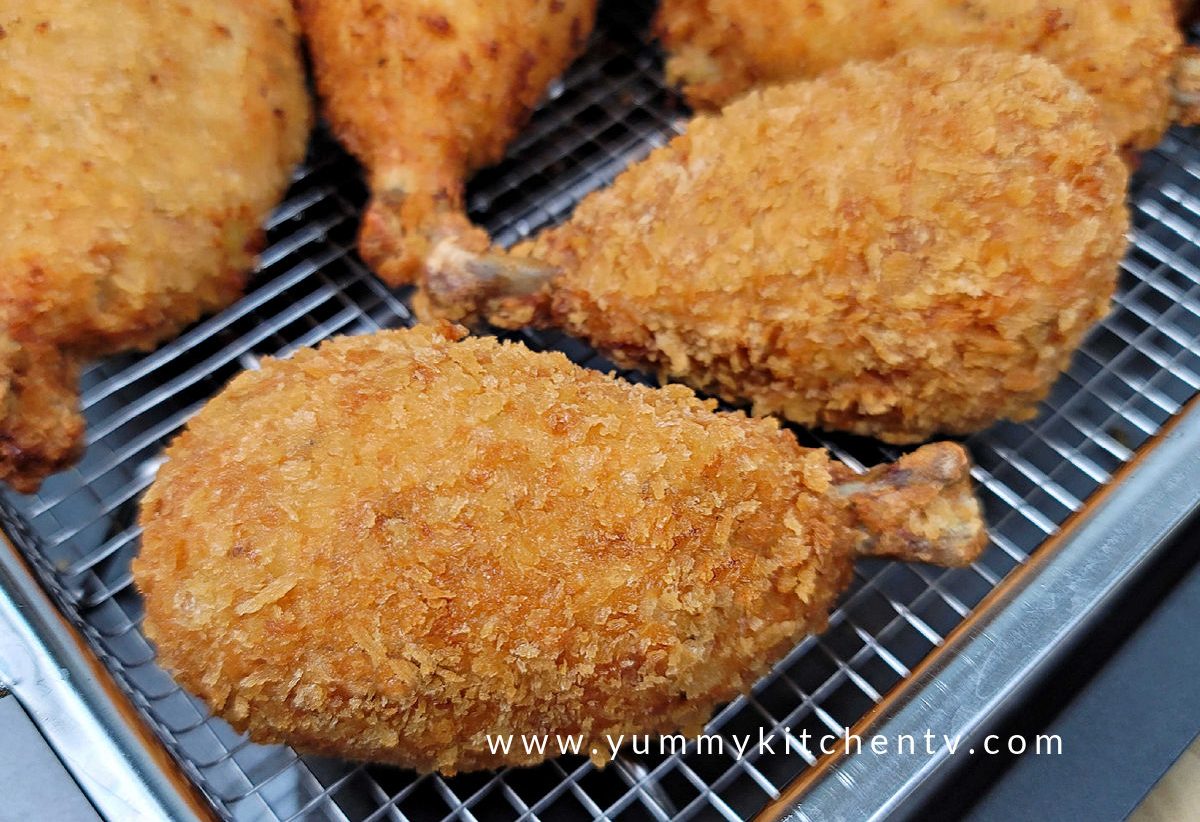 Chicken potato drumsticks is very popular in Philippines, is made with scraping cooked chicken meat from chicken thigh, mixing it with mashed potato and marinade. It is again added to thigh bone to imitate as chicken thighs and fried it in oil, after dipping, in bread crumps and fried it again. The combination of cheese, potato and chicken will surely capture your heart. Very convenient to eat as the bone will be your stick. Super crispy on the outside while heavenly soft on the inside. Drizzle them with your favorite sauces!

Chicken potato drumstick is a dish requested by my niece since she saw one on facebook and drooled over it. She was really excited when she showed me the video for it because she knows I’m gonna like it too (which is true).

The chicken potato drumsticks recipe really holds my top three favorite food items: chicken, potato and cheese. If you love them too, then this is the sign for you to make some of these at home!

At the first glance, you’ll never know that a chicken potato drumstick is not a modified chicken. Maybe you’ll just notice that the “meat” part was slightly bigger than the normal ones.  As you take a bite of it, you will surely be dreaming of clouds! (Literally what I felt). The cheese and potato mixture was bomb! Cheese + potato = never goes wrong

If you have a lot of chicken and has extra time, I highly suggest making some chicken potato drumsticks! Best eaten as an afternoon snack. Yummy!

HOW TO COOK CHICKEN POTATO DRUMSTICKS

Making some chicken potato drumstick is as easy as it looks like. This may take awhile to cook so use this experience as a bonding time with your kids and family.

Start by choosing the best and chunkiest chicken drumsticks you can get from the grocery store. The bigger the drumstick, the better they will be for this recipe.

First, we are going to cook the chicken. Get a large pan and arrange the chicken drumsticks. Before pouring some water. To make it delicious and enhance its meaty flavor, add our basic aromatics. Allow them to boil for around half an hour until tender. You can check the tenderness by using the fork test.

When the chicken are cooked, remove them from the pan. Do not discard the yummy broth as we will use it to cook the potatoes. Separate the meat from the bone using your hands. They are much easier to separate when cooked than when raw. (It is sometimes very tempting to taste the chicken, but you can do it HAHAHA)

Cook the potatoes in the chicken broth. When the potatoes are soft, transfer them to a bowl. The next step to do is to turn them into mash potatoes. You can either use a potato masher or simply with fork, in which way is much more convenient for you.

When both the chicken and the potatoes are ready, time to make them into a nice mixture. Before combining, chop the chicken meat into tiny bits. The mixture we want to achieve is a smooth mixture which will be meat and soft in texture when cooked later. Make sure that the ratio of chicken to potatoes are almost the same, since too much chicken might make out chicken potato drumstick a bit chunky. Also, don’t forget to mix in the grated cheese (best if you can have different types of cheeses).

This might be the time consuming part but is the most fun part. The following steps would feel like we are reviving a chicken zombie. Scoop some chicken and potato mixture in your hand and flatten it a bit, then add a drumstick bone in the middle. Shape the mixture into a drumstick shape, just like its original shape when the meat hasn’t been deboned. The resulting drumstick would be much larger and of course, yummier.

Serve the chicken potato drumsticks fresh out of the pan. Choose your own dressing and I highly suggest the mayo, ketchup and mustard combination just like in corndogs. Yummy!! Best paired with sago’t gulaman!