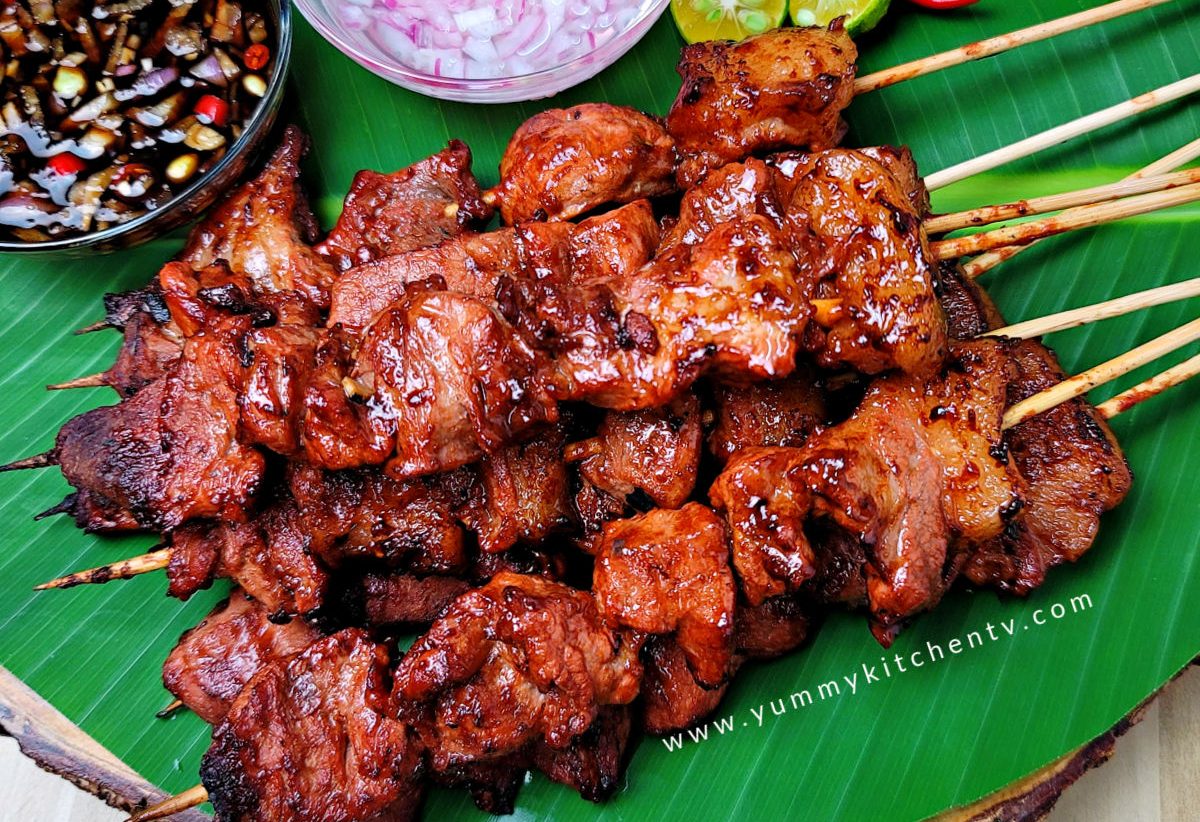 Whether for fiestas or for personal consumption, Filipino pork barbecue style will never let you down. Barbecues are a usual food during celebrations, and the ones almost always second to be fullly consumed after lumpia. I can still remember my childhood days where my lolo teaches  me how to skewer the meat slowly and precisely. I wasn’t really good with skewering but my lolo patiently taught me.

What I really look forward to when I make some pork barbecue is the grilling time! I have an electronic griller at home but I always prefer to grill the bbq using the traditional way. You don’t really cook barbecue everyday so why not get the full experience with the charcoal grill.

If you want a step by step guide on how to prepare some pork barbecue tailored to the Filipino faves, follow the simple steps below!

Aside from the challenge in grilling, preparations for the pork barbecue is actually a piece of cake.

Marinating the meat is very essential in dishes like this. Since the pork will not be boiled or braised, it is important that all the flavors and the seasoning can sip in through the meat through the marinating process.

For the marinade, this recipe is adjusted to the Filipino palate of having a sweet and salty umami taste. This would include seasonings like soy sauce, calamansi juice, ketchup, sugar, chilies and pepper. Also, included in the marinade is some lemon soda. Aside from the fruity sweetness it adds, it can also help in tenderizing the meat.

After marinating, it is now time to put them into sticks. Since the barbecue will be grilled for later, it has been a longstanding problem that the sticks are burned way before the barbecue are cooked. With this, I have a life hack for you. Soak the sticks in water (15-30 minutes will do) before you use them as skewers. The water will sip in the sticks, making them tougher to endure the heat.

Although there is no written rule about skewing barbecue, I usually do the usual pattern Filipinos do with their barbecue. Almost all meat in the stick is lean, and then there’s a mini part of fat at the last part of the stick. If you want to skip all the skewing processes, you can actually use this recipe to marinate other meat cuts like liempo or belly, in which you can put the whole thing on top of the grill.

When the barbecue are all ready, here comes the best part: grilling!! Although some people hate this cooking method, I really enjoy it. But before we start lighting up the charcoal, do not forget to make some basting sauce. This sauce is almost similar to the ingredients used in the marinade, but with the addition of cooking oil. The oil would help in further cooking the meat later when grilled.

Whether with a traditional griller or an electric griller, this Filipino style pork barbecue will surely capture your heart. I have tried using both, and both have their own advantages and disadvantages. But if you want to have the full experience, go with the traditional one. Although you’ll end up with the same aroma as the barbecue, at least you smell yummy too. HAHAHA. Have fun grilling!