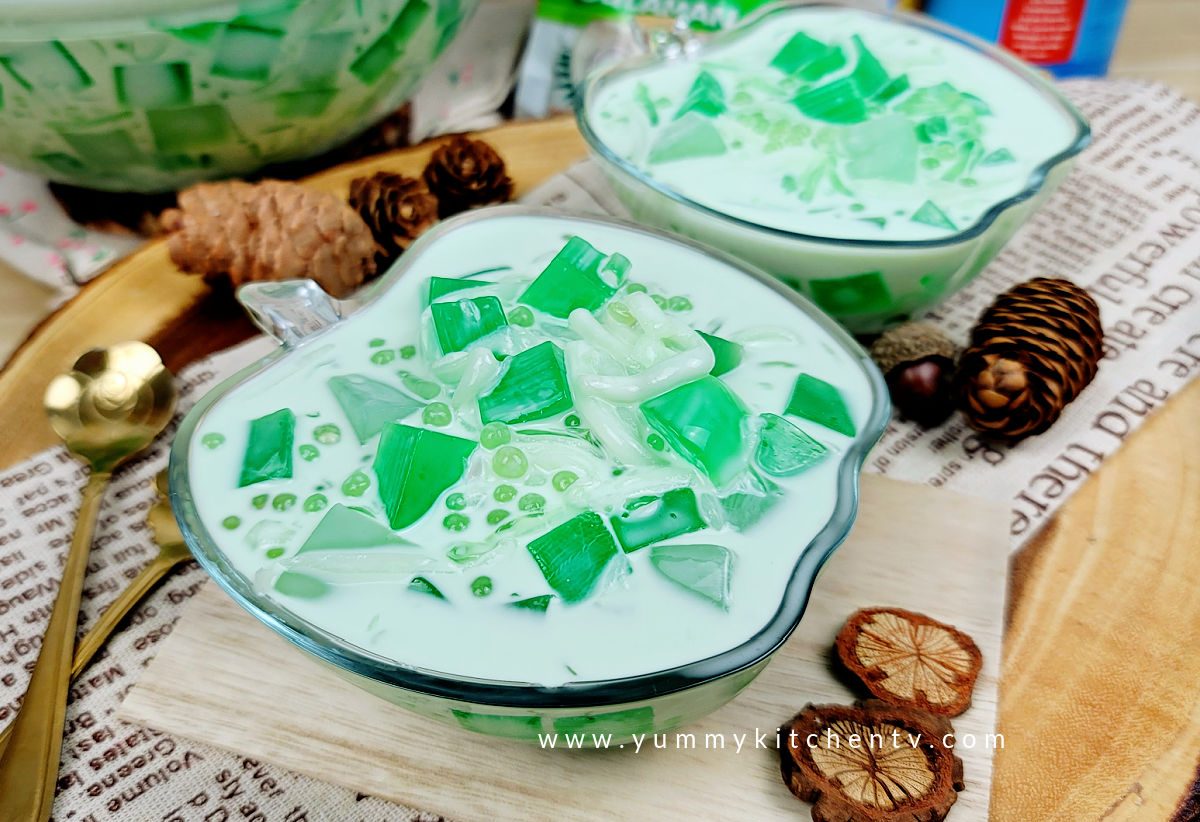 Aside from the fruit salad, buko pandan is another OG pinoy fiesta dessert. Buko pandan is quite a popular dessert due to its refreshing flavor, and also with the enjoyable feeling of different shapes and textures in the mouth.

When you go to any fiestahan or handaan and you do an attendance check, buko pandan jelly is always present. While it is most liked because of its creamy taste which relaxes the mouth from all the grease from other dishes, buko pandan is preferred also due to its ease of preparation. Jelly based desserts are usually done quickly and with minimal efforts needed.

As the name suggests, this dessert will have both the buko and pandan as its major flavors. Since this dessert is a jelly-based one, you can already know that this would be an easy peasy one.

So lets start by making the jelly. Instead of using plain water, I usually buy some buko juice for my buko pandan jelly. Although the taste of the buko juice is light, the natural sweetness from the buko will add a distinct freshness to the jelly. But if buko is not available, it is always free to use plain water for the jelly.

Unlike the package instructions at the back of the jelly, I usually use just 5 cups of liquid for my jelly. The resulting jelly will be soft but still firm. Cooking jelly really is a very simple process of dissolving the powder and waiting for the liquid to boil. Once my jelly are cooked, I divide them into two trays. This is for the reason that I cut one part of my jelly into cubes and the other part into jelly strings. (I also needed firm jelly so that they will be easily shredded for later). I shred some of the jelly for added texture.

When the jellies are done, grab another pot and cook your tapioca pearls. You can also opt to buy the already cooked ones if that’s whats available. Cooking tapioca pearls is simply boiling them until they become translucent. Don’t forget to stir the pearls from time to time as they have the tendency to stick to one another. After minutes of cooking, the center of the pearls might still be white. The technique is to pour some cold water (gradually) while stirring them. Let the cooked tapioca pearls swim in cold water until they are ready to be mixed in the dessert.

Now that all ingredients are ready, the last part and the most exciting one would be combining them all in a large bowl (You can add some cheese cubes too!). Just remember, the creamier, the better! Chill them before serving. Yum!

Aside from eating this as a chilled dessert, you can actually convert this to a sweet drink by slightly diluting the cream with either cold water or evaporated milk and then adding some ice. Best for the summer!