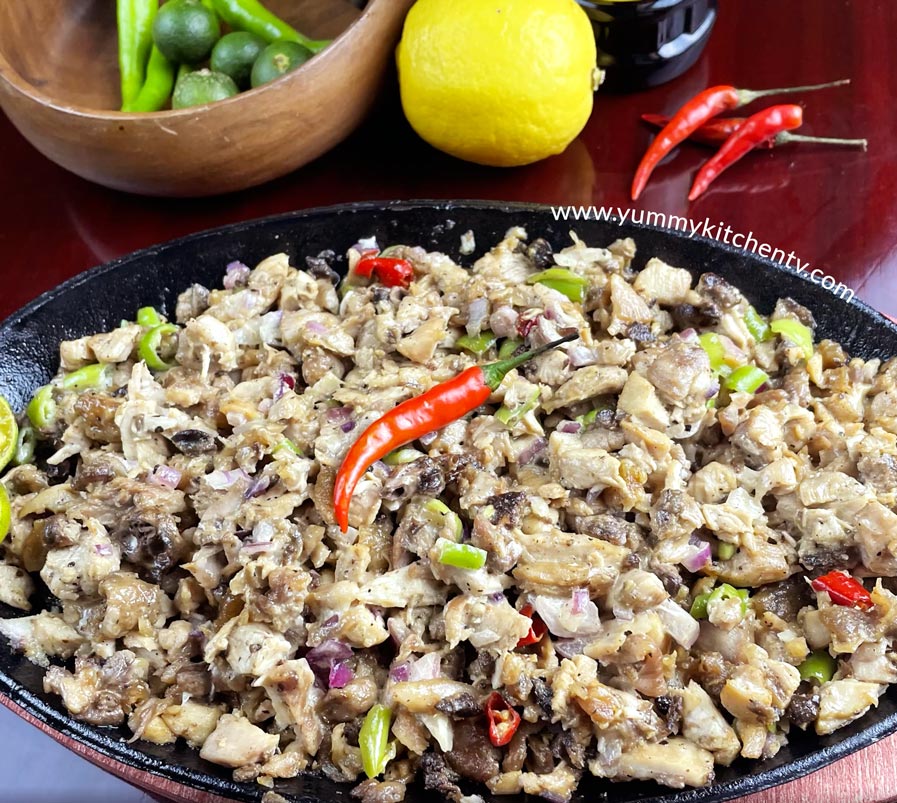 Sisig is a popular dish that Filipinos love and catches the interests a lot of foreigners. With so many kinds of sisigs available, one of the healthier ones is the Chicken Sisig. A delightfully crispy, crunchy, easy to make with a short list of ingredients readily available at home. This hot and spicy, beautifully crisp, and flavorsome chicken dish is pact full of flavor you’ll be amiss not to try.

A short explanation of the Sisig

Sisig is a Filipino dish made with pork bits, from a pig’s belly, liver, face, to other variants like beef, shrimp, chicken and pork. The ‘meat’ used is usually soaked in calamansi, chili peppers, and onions, to remove any gamey smell and also adds a citrusy flavor to the meat, depending on how long its been marinated. The dish originates from the province of Pamanga and is still a staple till today. In 2017 it was declared that the Pork Sisig or ‘Sizzling Sisig Babi’ would be a tangible heritage of Angeles City. The dish has long roots tracing back to 1732, recorded by a friar and was described as a salad mix of green guava, or green papaya, dressed with vinegar, garlic, salt and pepper. While the sisig before was quite different from the sisif we all love now the method of preparing the papaya was then tried on meat, namely pork, and with the need to also use a pig head a cheaper and sometimes free pork part. Coming from the excess meats from the commissaries of the Clark Air Base in Angeles City, as the U.S. Air Force base there were not able to use these parts. Aling Lucing, the person held accountable to creating this lovely dish tried adding pig ears and cheeks with the marinated pork bits and cooked them and created the familiar sisig. It was after a few more years that the idea of the sizzling plate by another resident in Angeles that thought of serving the sizzling plate over a hot plate to avoid the fat or lard from turning cold too quickly. These ideas combined made the beloved dish into what we cant help but crave and salivate for.

What is a Chicken Sisig?

Chicken Sisig is a variety of Sisig made with chicken, chicken liver, and chicken skin. The chicken skin is an alternative to the pork fat and skin that creates the crunch you usually get. The chicken skin is separated from the chicken to fry by itself till it’s turned into a beautiful brown crispy goodness that’ll surly level up every bite of this sisig. People who love sisig eat this are ones who are looking for a healthier alternative, or cant eat pork. This low in fat, depending on how much mayonnaise or type of butter you use is just a breeze to make, everything can be easily found at home, all you need is an optional sizzling plate to give you that bar vibe or keeps you dish hot for longer and you’re ready to start!

All you need are some chicken parts with or without the bones, but the skin is a must. These are then all fried separately, from the chicken meat, skin, and cleaned liver. Once they’ve all browned, chop them up to bits similar to a pork sisig. Tossing them around with other flavorings like red onions, soy sauce, pepper, spring onion, red chili, mayonnaise, calamansi and salt. Placed over a sizzling plate. Perfect for pulutan, a main dish for lunch or dinner. This Chicken Sisig recipe will surely make you smile and wonder why you haven’t tried making this.

Place a side of halved calamasi on the side or top some more chilies if you really want that extra heat. Just make sure to cook enough rice to pair up with this deliciously amazing Chicken Sisig.

A sizzling hot and exciting way to eat chicken

A healthy but indulgent dish that deserves some more recognition. From it’s simple to do method of preparing the chicken, to the tasty easy of adding flavors with some chilies to awaken the senses and give you that’s extra kick. Sweetened by a little bit of mayo and tang of the calamansi juice, make it even more rich in flavor by melting butter over the plate to be tossed around with the chicken. Loaded with flavor and crispiness, it’s hard to say no to!