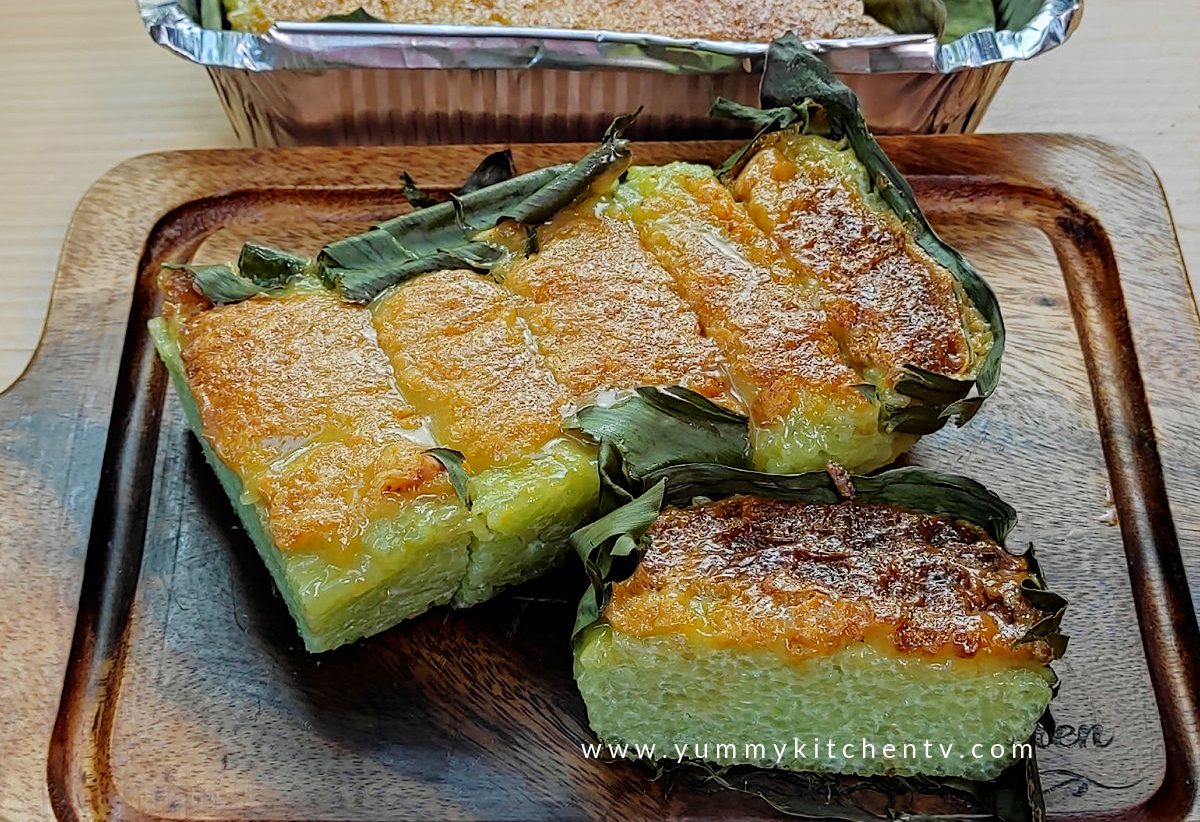 This Biko Pandan is made with glutinous flour, coconut milk, buko pandan condensed milk, condensed milk, eggs and banana leaves. Enjoy your biko with a hint of pandan flavour in the same exact sweetness that you like. You’ll never get over with this biko! Best paired with afternoon tea and coffee.

ME AND MY KAKANIN

Filipinos might have an unlimited list of kakanins and some of them, we might haven’t met them yet. I got familiar with a lot of kakanin ever since I knew them. If some kids had problems on what candy to choose, I had problems on what kakanin to choose. I am really fond of kakanin. These type of snacks reminds me most of my childhood days where me and my lola go to the market for our weekly grocery. She always buys me a piece of  any kakanin I requested. Of course, biko is always one of my top choices.

Most of the kakanins are brown or white. I easily remember biko since it is literally rice! Like the same boiled rice you eat with your ulam. I remembered being confused with sapin sapin ang maja blanca before, but I never went wrong with biko.

Biko is a type of kakanin best suitable for kids and kids at heart. Since it is made with rice, it can make me full easier than eating candies or chips. It is sweet and sugary which can increase my appetite for the next meals. And since it is made with carbohydrates, it gives me so much energy for the rest of my day.

Our featured recipe for today is a word play of “biko”, “pandan” and “yema”. Of course as Pinoy’s, we enjoy these snacks separately. But what if we combine their concepts into one amazing dish?

Biko Pandan.. Yes, you got it. It is our favorite biko which is further enhanced with pandan flavor. Oh, you thought it was “buko pandan”? You still got it right since the biko is also flavored with our favorite coconut cream.

Any kakanin is much more enticing once you poured a luscious yema topping on it. And when it’s broiled, heavenlicous sa sarap!! Best dessert or snack for those who have sweet tooth like me.

If you wanna learn how to make this innovative recipe, follow the recipe below. Happy cooking!

Making biko pandan de yema is much simpler than you thought. It is simply an upgrade of your favorite sticky rice.

First, we are going to incorporate the creaminess of the coconut cream to our sticky rice. Start by soaking your glutinous rice for a few minutes. This step will help your rice be softer and smoother for later. If you have less time to prepare and want to skip this step, add a little extra water with the coconut cream once you cook them in the rice cooker. If you do not have a rice cooker, you can actually cook it in your regular rice pot! But of course, check it from time to time to prevent it from burning. You would not want a scorched biko!!

Transfer the cooked rice into a pan. Now, we are going to enhance the rice’s flavor with pandan. If you cannot find a buko pandan flavored condensed milk, you can use plain condensed milk and then drip some pandan flavor/extract as an alternative.

The yema is much easier to make. Simply combine the plain condensed milk and egg yolks in a pan until it becomes a gorgeous and sweet yellow sauce. You wont be needing the egg whites for this recipe, so save it for other dishes.

Pour the yema over the biko pandan and then broil until the yema becomes golden. I like to enjoy them plain for this time but the adding toppings would  be great too! Optionally, you can add other toppings you like such as cheese or latik.

I like enjoying biko pandan de yema as snack with my afternoon tea and coffee. Enjoy! Hope you will like it too!