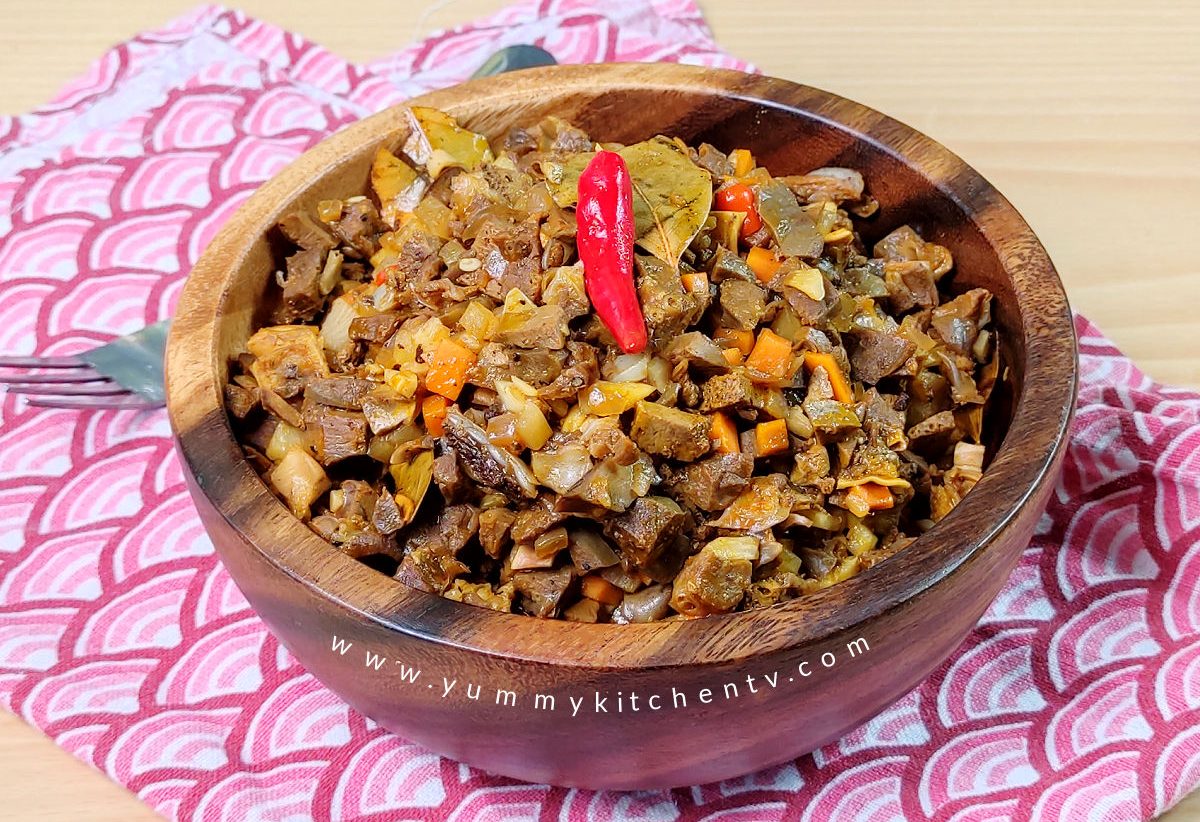 Bopis is a spicy Filipino dish, where pork innards like lunge, heart and lever is boiled with garlic, ginger, pepper corns and laurel leaves, then cut to small cubes and sautéed with tomatoes, radish, onion, chilies, carrot, ginger, and seasoned with annatto powder, laurel leaves, whole pepper corn and fish sauce. Bopis usually served as an appetizer or with beer, this medley dish is also served best when topped with hot steaming rice. Yu

When Parokya Ni Edgar said “Tama na yan, inuman na!”, I always immediately thought of bopis. Bopis is always the very first pulutan I can think of when talking about pulutan dishes. This is may be for the reason that when I was still a child, I always gather some pulutan from the table where my lolo drinks with his friends. But instead of eating it papak, I always grab my favorite bowl and eat it with some hot steaming rice.

Before this spicy dish became an inuman staple, bopis was actually one of the best Filipino dishes served with hot steaming rice. Its name originates from the Spanish origin “bopiz”.

For first timers, bopis might actually look and feel weird because the organ meats used in this dish is not really that usual. Pork lungs? Pork heart? Pork liver? One with no knowledge on this might be terrified. But although the organ meats are not usually served, what I love about bopis is that it made people love these organ meats. The meats were presented in a nice way which are best partnered with hot steaming rice or with ice cold beer.

If you’re interested in knowing how to make some bopis, read the article below and follow the quick and easy bopis recipe. Happy cooking!

HOW TO COOK BOPIS

Preparing the ingredients for bopis might take some time but the actual cooking process is quick, simple and straightforward.

Choose where you get the organs. For this type of dish, I highly recommend butcher shops than wet markets. Try to smell the organs just to make sure that they were properly handled and not in any way spoiled.

Gather the organs and clean them well. These type of meat do not cook thoroughly through cooking, so we need to boil them first (also to remove impurities). Do not be surpised that after boiling, the color of the organs will really look different. They will look darker and greyish in color. And that’s a good marker of a fully cooked organ meat.

The next part would be the tedious part especially if you are making a large batch of bopis. This will include a lot of chopping until all of the organs are in small cubes. After you’re done with the organs, don’t forget to also chop the vegetables.

When all the ingredients are prepared, the rest of the cooking will be so much easier. All you need to do is to saute and season all the chopped ingredients until it formed into a nice and savoury bopis. When the bopis is almost cooked, start preparing your steamed rice because there will surely be an unli rice action! Happy eating! 🙂