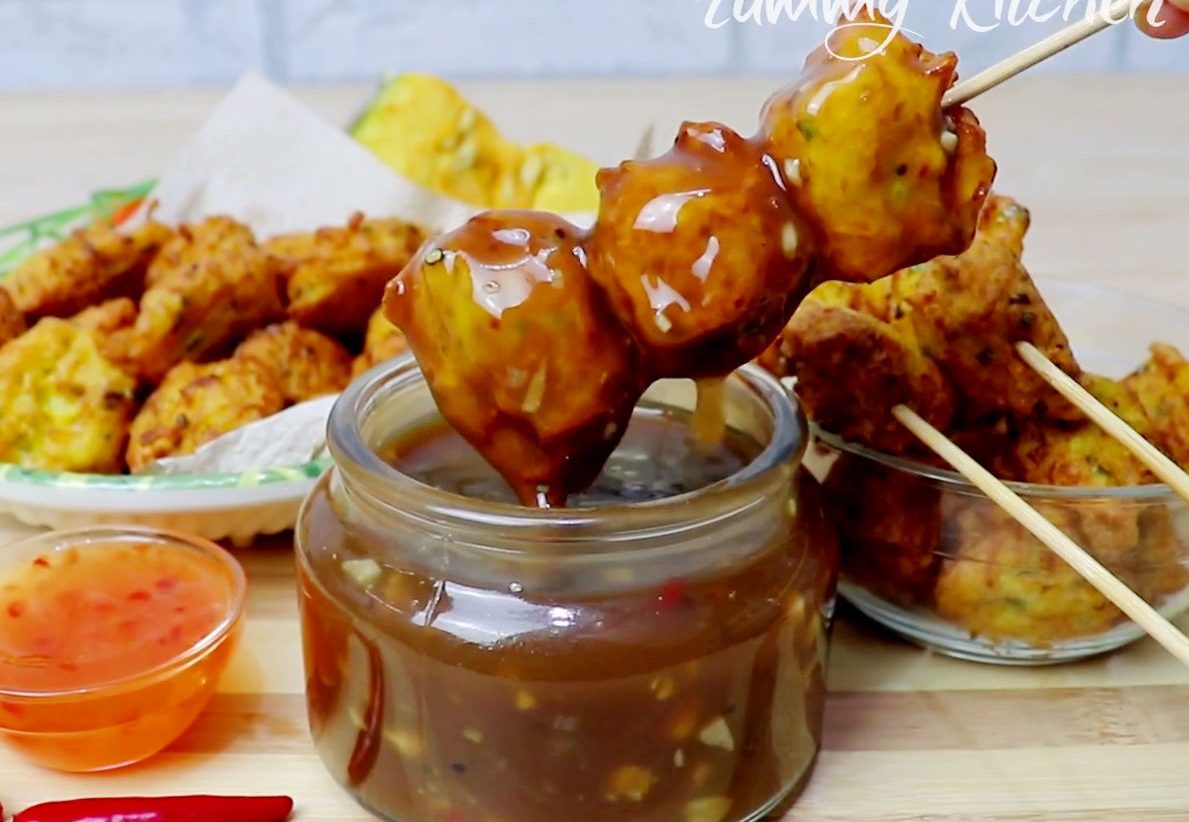 Veggie balls is one of the top-rating and most sold street food in almost any town. It can be described as small, bite-sized vegetable pancakes packed with different flavors and a lot of nutrients. It is best enjoyed with fishball sauce in a plastic cup with a stick while hanging with your friends after school.

During one of me and my barkada’s girl’s sleep over, we got hungry in the middle of the night and decided to make some snack. With what’s available from my friend’s food counter, I suggested making veggie balls with fishball sauce. Unlike the common cabbage and carrots used in the street food veggie balls, we tried using a more variety of vegetables. I realized that the street food veggie balls can still taste better. Since then I make my own veggie balls whenever I crave for one. It is so easy to make and would not cost you a lot of time and money. I introduced the veggie balls to my niece who is really not a fan of vegetables but she liked it. This just proves the powerful taste of the veggie balls. Veggie balls can also be enjoyed with different sauces but I think the fishball sauce is the best of them.

HOW TO MAKE VEGGIE BALLS

Veggie balls is similar to making vegetable pancakes – only that the pancakes are ball-shaped. The two components of a good veggie ball combo is the veggie balls and the sweet and spicy fishball sauce. For the veggie balls, start by preparing the main vegetables. Wash, peel and chop the squash and carrot. These two vegetables are honestly some of those vegetables which are hard to grate so if you have an easy chopper, use it. Do not forget to remove the squash’s core and seeds. Those must not be included in the veggie balls. Grate the squash and the carrot and place in a large bowl. Prepare and chop the other vegetables and add them in the large bowl. In this recipe, the other vegetables are specifically spring onions, onion and garlic. You can definitely add whatever vegetable you like to add in your veggie balls. It would be advisable to use the leafy ones like malunggay as it also adds color and appeal to the resulting veggie balls. Add the all-purpose flour, cornstarch, sugar, eggs and seasonings. Mix the components well and add some water until you reach the desired consistency.

Based on my research, some people drain the carrots and squash before they put it in the veggie ball batter. It would be a lot more nutritious to retain the natural liquid from these vegetables rather than throwing them away during draining. With this method, you will also need to add lesser water since there are already liquid from the vegetables in achieving the desired consistency. The desired consistency must not be to flowy and not too thick. If you are not confident, you can try frying some of the batter. Use two teaspoons in forming the batter into balls. If you have a mini scooper, that will make the work easier. When frying, the batter must form a ball and not spread. That is how you know that you are on the right track. After you achieve the right consistency, start frying the veggie balls. I recommend to deep-fry the balls. But if there are less cooking oil available, the oil must reach at least a half of the ball. You can fry the balls in batches but make sure that they are not crowded in the pan. Continue frying until the veggie balls are golden brown. Do not make too much large veggie balls. The outside may be golden brown but the insides are not cooked. When cooked, place the balls in a strainer or in a tissue paper to drain the excess oil.

Since the veggie balls are often sold side by side with the other streetfoods like fishballs, a classic fishball sauce is the perfect partner for our veggie balls. To cook the fishball sauce, simply add all the ingredients into a sauce pan. Mix it well especially that the flour and cornstarch must be totally dissolved. If not, it would create small floating balls of boiled flour which is not good for a fishball sauce. Heat the mixture and continuously stir until it thickens. The sauce will fully thicken as it cools down. Serve your veggie balls in a plate and drench this flavorful sauce.

If you’re not a fan of fishball sauce, other sauces that would more likely compliment the veggie balls are seasoned vinegar, ketchup or mayonnaise.

Watch how to Cook Veggie Balls