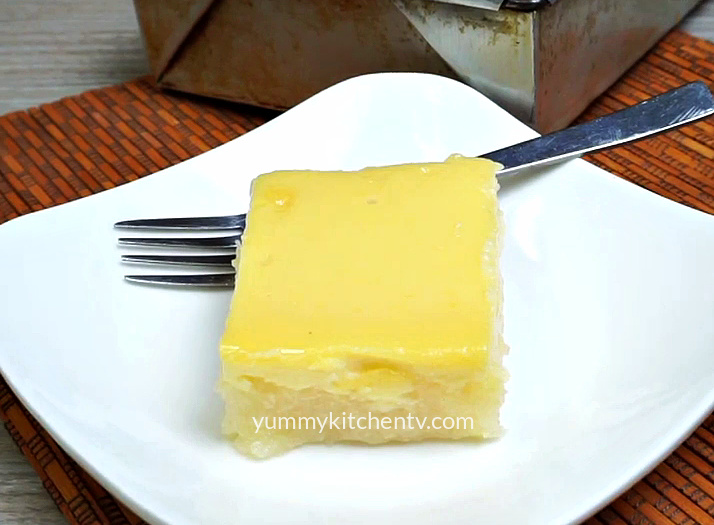 Want something sweet but not too sweet? Cassava custard cake is a soft and moist Filipino classic cake best suited for you! Enjoy this delectable cake and try to make one at without needing an oven or any special equipments.

Cassava is a starchy root vegetable which is native to tropical and sub-tropical regions. It is also known as kamoteng kahoy and balinghoy in the Philippines. It was known as the third largest source of carbohydrates after rice and corn. It is rich in a lot of nutrients including starch, calcium, phosphorus and Vitamin C. Cassava works in an array of dishes and can be a good alternative for potatoes.

Before our favorite branded chocolate cakes existed, cassava cake has already been the top tier classic cake found in almost all bakeries. Cassava cake is one of the traditional Filipino moist cake and is one famous use of cassava. It is a rich creamy custard cake with a subtle hint of sweetness from the combination of coconut milk, evaporated milk, and sweetened condensed milk. It is gluten-free and can be enjoyed even those by those who are diabetics or simply do not like too much sweet desserts. It is somehow considered a type of bibingka and is often sold alongside other kakanins. Some of cassava cake’s other names include cassava bibingka and bibingkang kamoteng kahoy. It is usually enjoyed as an afternoon merienda together with some hot coffee or tea.

Cassava cake can be decorated with an assortment of toppings like grated coconut, custard, cheese. In this recipe, we will make our homemade custard topping for the cassava cake. The classic cassava cake is broiled until top has browned, somewhat similar to a crème brulee top. Cassava cake can be done in different ways. It can be baked, steamed or broiled. For those without an oven at home, it can also be pan-baked.

HOW TO MAKE NO BAKE CASSAVA CUSTARD CAKE

Making the cassava custard cake is so simple. There will be two parts in making this cake—the soft and tender cassava cake and the sweet custard topping.

To make the cassava cake batter, simply mix all the ingredients in a bowl until well-combined. Remember to squeeze the liquid out of the grated cassava so the cake will not be too wet. You can adjust the amount of grated cassava in the batter if you want a change in texture. Less cassava will result to a softer and moister cake while cakes with more cassava is firmer and chewy. Pour the cassava batter in a baking pan brushed with oil or butter. Pan-bake the cassava cake. While waiting, make the sweet custard topping.

The custard cake is much simpler than the batter. Simply mix all custard ingredients in a bowl and strain the mixture twice. Pout the custard on top of the cassava cake. Make sure that the cassava cake is already firm before you perform that step.

The only thing left is to let it cook. After a few minutes, do a fork test to check if the cassava cake is cooked up to the inside. When done, serve the cassava cake and slice to generous pieces. Enjoy with a hot tea or coffee.

Watch how to Cook Cassava Custard Cake without Oven

For the cassava custard cake: