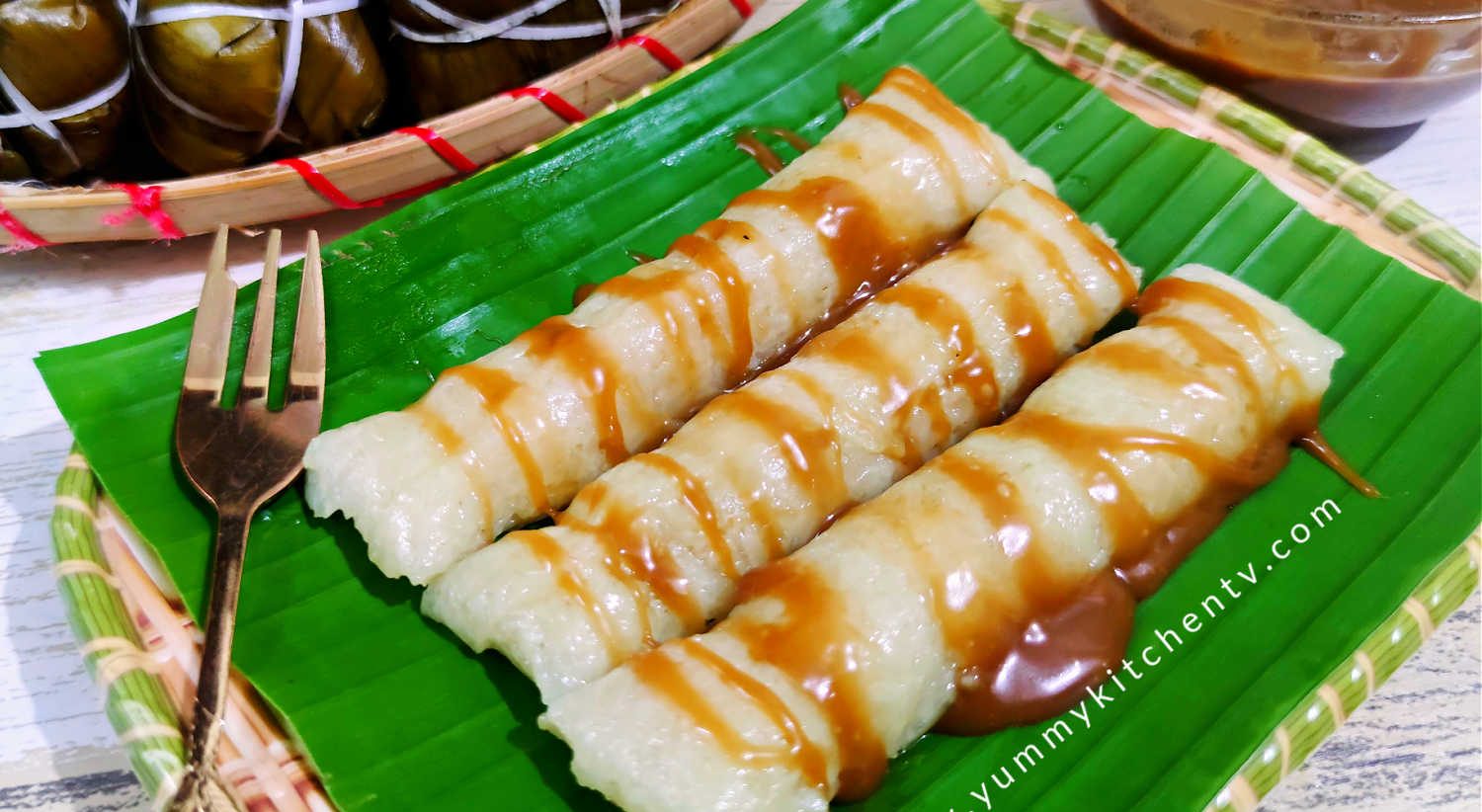 Behold my lola’s specialty and one of San Pablo’s pride—the suman malagkit. Suman malagkit is one of the most popular native Filipino delicacies and truly a classic favorite. These small steamed sticky rice cakes are packed with creaminess from the coconut drizzled with some rich caramel latik sauce. It is best eaten anytime of the day, especially with some hot coffee on the side.

If you are a bonafide fan of Yummy Kitchen, you’ll know at this point that I really love making different types of kakanin. When you think about kakanins, suman is surely on the top 5 of your list. The suman malagkit recipe I’ll share with you is a recipe I learned from my very own lola. My lola has been making suman for decades already. She’s a great cook and my go-to person when I’m having kitchen problems. Most of the recipes I share in Yummy Kitchen are inspired by her.

Suman is one of the most famous Filipino delicacy. There are different types of suman like suman sa lihiya, suman pinipig, black rice suman, tupig, suman balinghoy and many more. Although a variety of main ingredient is used, the most common main ingredient is the sticky rice. If you’re going to the market to get some sticky rice, just ask for “malagkit na bigas”. This is a starchy type of rice best used for a sticky suman. It can also be used to other sticky and thick dishes like champorado and biko.

How the people of San Pablo make their suman is similar to suman from other place, only that we make our suman with a lot of extra love. Also, we do not add sugar to have that pure and creamy taste of coconut-flavored sticky rice. The latik sauce is always there to the rescue if you want more sweetness to it.

HOW TO MAKE SUMAN MALAGKIT WITH LATIK SAUCE

Suman is one of the recipes hand down from my lola. While making this suman malagkit recipe video, my lola still stands by my side and will forever be my guide. If you have watched the video, you’ll see that we gathered a lot of banana leaves before we started making the suman. Banana leaves will be very useful in making a suman malagkit. Make sure you grab a lot of those.

Start with cooking the sticky rice. Simply cook the coconut milk and malagkit rice together until the liquid is fully absorb. Can you imagine how creamy the rice will be? Yummy! If you would like to make a smaller batch using this recipe, just remember that the malagkit rice and coconut milk must always be in equal parts. When the liquid has dried, transfer the sticky rice in a tray just to cool it a bit, warm enough to be molded by your hands.

The suman is wrapped in banana leaves for that distinct aroma and flavor from the leaves. It also makes eating the suman more convenient to eat as you can hold it using your hands. The most common shape of the suman is the lengthwise or log form. If you want to do this one, cut your banana leaves in rectangles. Scoop some sticky rice and just roll it into a log. Easy, right? Here is another shape which is not too common but is also fun to make. Aside from the log form, you can also make a circular suman. Cut your banana leaf in big circles. You can watch the video for a more visual tutorial on how to make a perfect circle banana leaves. Here in our place, we make a pattern of the circular leaf so that making more will be much easier. Before you scoop some sticky rice to your circular banana leaf, cut a small square banana leaf and place it in the middle. This will prevent the suman from bursting later in the cooking process. Lastly, tie your suman into twins using a twine. If you watched the cooking video, there is also a short tutorial on how to make the perfect twine to hold your suman better.

Boil or steam your suman. In this recipe, I used the boiling method. If you’re gonna use this too, remember to put a bunch of banana leaves on the bottom and top of your suman simply to protect it from too much heat and to prevent burning or overcooking.

Cooking the suman may take up to 2 hours, so you can make your latik sauce while waiting. The latik sauce is made by caramelizing coconut milk by mixing it with some brown sugar. When thick, it is good to go.

If you made a large batch, you can give share some to your friends and kapitbahays. If you want to keep some for yourself, you can store the suman in the fridge and enjoy it whenever you want.