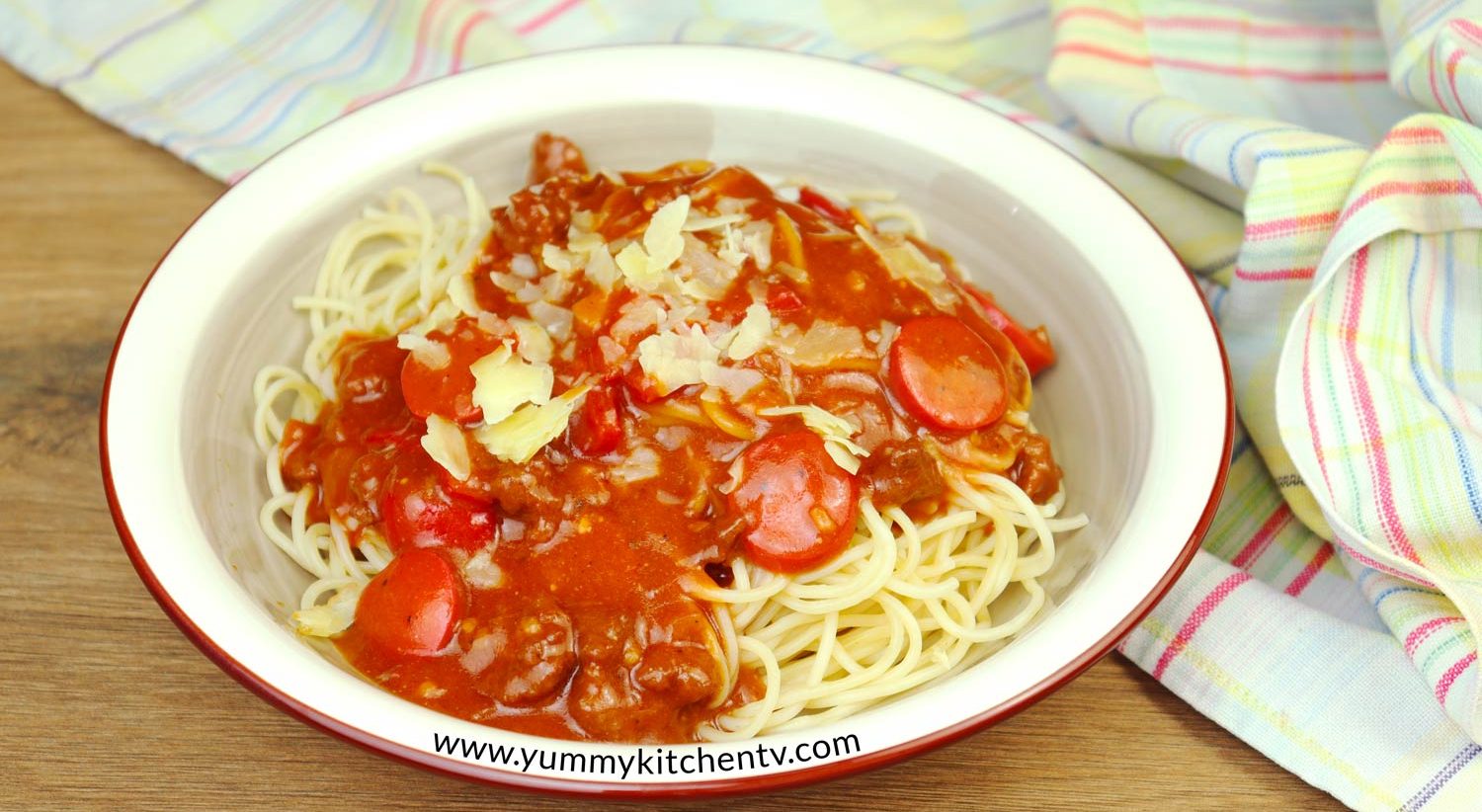 Ready for a sweet tasting, utterly delicious spaghetti that will remind you of your childhood? Then this Jollibee Spaghetti recipe is the one you’ve been looking for! This recipe will take you back on those days when you get back at home after school or work and have a serving of Filipino style spaghetti with friends, on special occasions like birthdays, and even on certain holidays. Swirl your fork over to get the perfect bite of al dente pasta wrapped up in a meaty, brightly colored, sweet and savory flavor packed sauce with a sprinkle of cheddar cheese to top it off. A taste that many Filipinos have beloved and embedded in their memory on what Filipino style spaghetti should taste like.

How did the Filipino Spaghetti get started?

The Filipino Style Spaghetti was inspired by the Italian Bolognese. While many Italians will surely feel appalled by the idea od a sweet spaghetti with hot dogs. This Filipino spaghetti is actually very addictive and cannot be helped but be loved as a common Filipino comfort food, especially by kids and adults alike. The idea of this pasta came to the Philippines in the 1800’s during the American colonization, they were introduced to a myriad of products, namely the ketchup and hot dogs which were incorporated to the dish. It was even rumored that the spaghetti dish was created due to General Douglas MacArthur in World War II at Japan where they had the Spaghetti Neapolitan, which uses ketchup rather than tomatoes as one of the main bases of the sauce. MacArthur the adjusted the flavor profile when he arrived in the Philippines, with other ingredients added. The localized version of the spaghetti uses a special ingredient. The ‘Banana Ketchup’ depending on the brand the color may vary to a muddy brown to a vibrant red similar to the usual tomato ketchup. The banana ketchup adds a bit of an orangey color and sweetness into the sauce.

Why do people love Jollibee Spaghetti?

These days the rendition of the Sweet style Filipino Spaghetti dish can be found from fast food chain restaurants to popular menus and popularly made at home especially on birthdays and special occasions. The Filipino Style sauce has gotten so popular there are even premade sauces you can buy in the supermarkets to be heated up ready to be topped on some noodles of your choice.

To create this wonderfully sweet and savory delightful dish, all you need to do is cook the noodles according to packaging, adding salt to add more flavor and oil to keep the noodles from sticking together. Once al dente take these out to strain and set aside. As for the sauce, this is just a quick mix of hot dogs and ground beef seasoned with salt and pepper for that meaty taste and texture. Cooked in aromatics like onions, bell pepper, and garlic. Cooked with the Filipino Style Spaghetti Sauce a quick easy mix of tomato sauce that already has a hint of the Sweet and savory sauce that we’re trying to turn to another level with. Adding tomato paste to add a richer stronger savory taste, water to thin down the sauce, cream cheese to make it creamy and add back the thickness, the well beloved and important ingredient for the Jollibee spaghetti, the banana ketchup, brown sugar for the extra sweetness, and a Knorr beef cube to give it an extra beefy umami flavor. These are then simmered for some time to keep the flavors blended well. Poured over the noodles and topped with cheese to décor and add more cheese. Because everyone loves cheese!

Get ready to surprise kids and adults alike with this wonderfully beloved Filipino styled Spaghetti dish.

A sweet and meaty version of your usual spaghetti

Make your afternoons more colorfully bright and festive with this Jollibee Spaghetti dish! A Filipino style version of the usual red-sauced spaghetti with a sweeter and almost child like taste. Make it with hot dogs, and ground beef, or go for another route like using pork or sausages. What’s great about this dish is that you can also make this without the need of meats and just make it with the sauce. a very temptingly delicious dish that will take you back to your childhood.