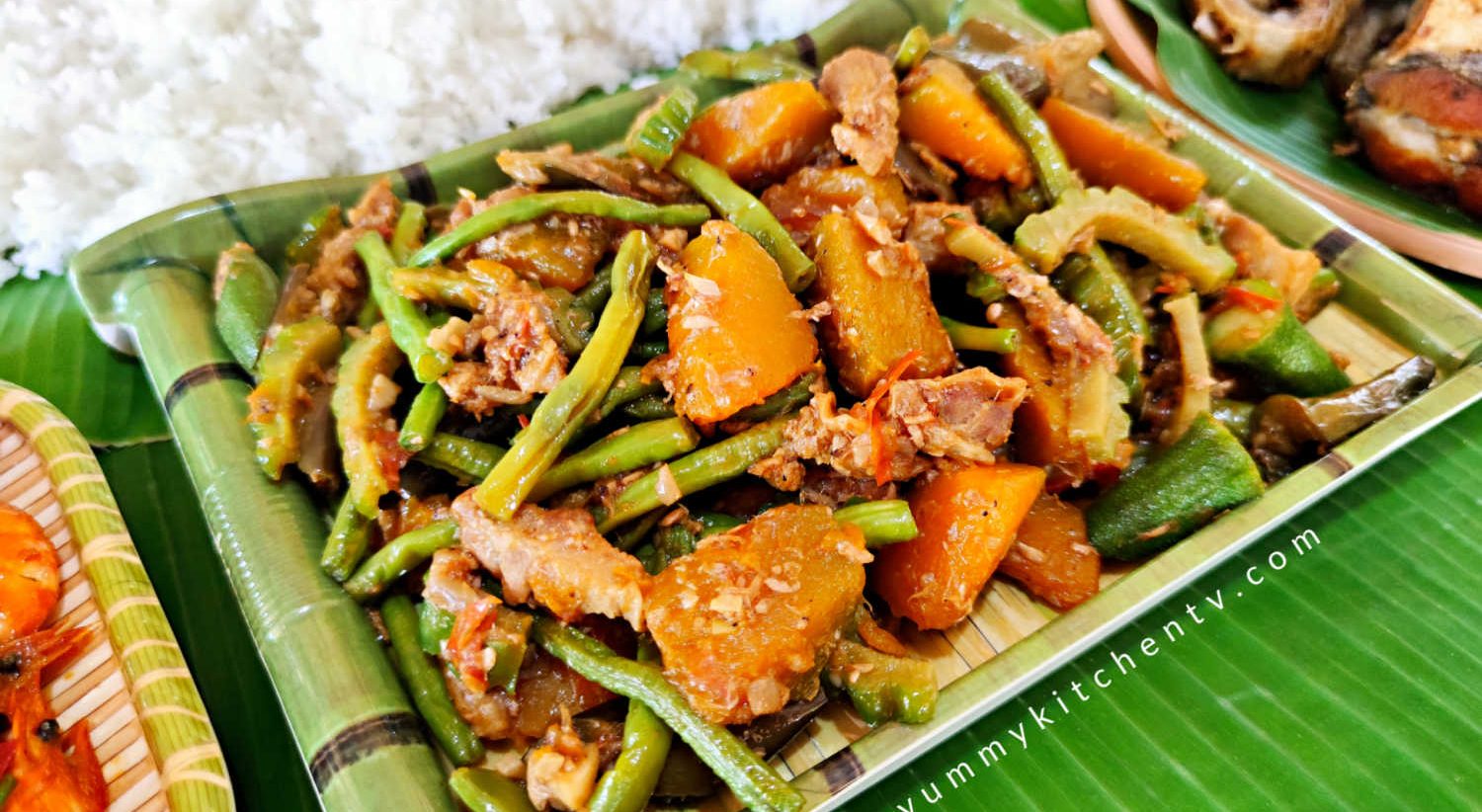 Pinakbet Tagalog is a Filipino vegetable-based meat dish that can be served as an everyday dish and is made with string beans, squash, bitter gourd, eggplant, okra, pork, shrimp paste, onion, garlic, tomatoes, pepper and salt. Most of its flavors come from the umami and savoury fresh shrimp paste. Best eaten as a side dish or as an ulam on its own. Serve it with some hot steaming rice during lunch or dinner.

Pinakbet na gulay is a vegetable dish which originates from the Ilocos region. Its name is derived from the Ilocano word “pinakebbet” which means “shriveled”. This makes sense as the vegetables kind of shrink as they are cooked. Pinakbet also comes with different names like pakbet or pinakbet tagalog.

There are two types of pinakbet which primarily differs with the type of vegetable and the alamang used. The Ilocano version uses string beans, okra, eggplant, kamote and bitter gourd and uses bagoong monamon or fish bagoong as the seasonign. The Tagalog version uses the same ingredients with the addition of squash. Regarding the alamang, this version uses fresh shrimp paste as the seasoning.

Whenever my mom prepares fried fish, grilled meat or anything dry, it is a must to serve pinakbet na gulay. I remember plating my food using the Pinggang Pinoy way where my rice, meat and vegetables are nicely portioned. Like other kids, I was an ampalaya hater before. What kid would enjoy something bitter, right? Pinakbet became my training on eating ampalaya. I was hesitant at first but the bitter taste lessens when eaten with other vegetables. And with a lot of pinakbet, at some point I felt numb, but I learned how to eat ampalaya with a smile.

Now, we are applying this same technique to my niece who also hate ampalaya. We’re really excited to see if this technique will also work on her.

If you want a technique on how to teach your kids on how to eat ampalaya, pinakbet na gulay is a good start. Aside from this, pinakbet is really a good vegetable dish which adds a nice amount of vegetables in our diet. To learn how to make Pinakbet Tagalog, read the recipe below.

HOW TO MAKE PINAKBET TAGALOG

Start by preparing the pork belly. Seared pork belly will make the dish more savoury and adds intense meat flavor. But if you want a meatless dish, you can simply omit this ingredient. Alternatively, you can add chicharon on top.

Eggplant becomes super soft when overcook so shallow-fry it initially so we can simply add it later in the cooking.

Make the sauce base by sautéing the aromatics and the fresh shrimp paste. Remember to wash and rinse the shrimp paste before adding to the pan. This is also to reduce the saltiness to an amount that is just perfect for the pinakbet.

Lastly, add the rest of the ingredients and toss gently until every piece is coated with the alamang sauce. I like my pinakbet na gulay together with any fried fish. Enjoy!