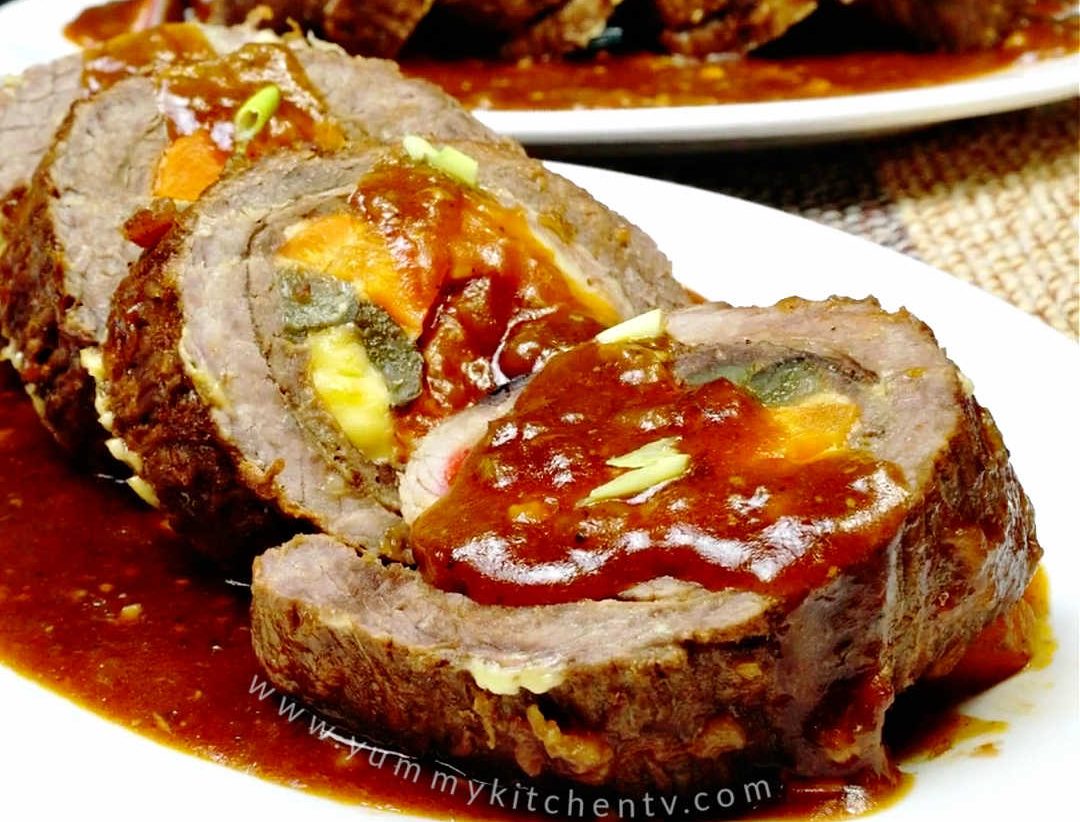 Morcon is a popular Filipino dish commonly served on holidays and special occasions, and is made from sliced beef, carrot, hotdog, whole pickles, cheese, eggs, all purpose flour, tomato sauce, broth cube, bay leaf, calamansi, soy source, fish sauce and pepper. basically Morcon is a beef roll stuffed with different ingredients and is braised in rich tomato-based liquid. It is served with hot steaming rice or with mashed potatoes together with the sauce.

When you search for morcon in the internet, you might be surprised that the original morcon from Spain were revealed. Filipino’s made our own version or morcon which is totally delicious and competitive with the different dishes all around the world.

Morcon is a Filipino-style beef roll which consists of thinly-sliced beef rolled with a variety of stuffings including a variety of food items like cheese, eggs, carrots, pickles, bacon and sausages. The roll is tied and is braised in wonderful tomato sauce until done. If a beef roll is tied, that’s when you know it is bursting with goodness inside. This roulade is usually compared to other meat rolls like chorizo, embutido and sausages.

Morcon may be tedius to prepare for some which is why it is only served during special occasions. Beef may also be a bit of expensive compared to other meat. There are other variations of morcon which uses chicken and pork. If you want to stay with the classic version, prepare your budget and get excited to work for a while in the kitchen.

HOW TO COOK MORCON

To first step in making the morcon is choosing your beef. You can actually make use of any beef cut as long as it is lean meat. Some of the recommended beef cuts would be beef brisket, beef round and chuck. Prepare your beef slices. You can either slice the meat yourself or ask the butcher to cut it morcon-style. The thickness should be half an inch per slice. If in case you are having difficulties making it thinner, you can use a kitchen hammer or a rolling pin to smash the beef. Cut the beef slices parallel to the grain so that you can cut against it after it is rolled. When the beef slices are done, marinate them in a mixture of soy sauce and calamansi. While marinating, prepare the fillings and cut them into strips.

It’s wrapping time! Lay a slice of beef in clean and flat surface. Arrange the fillings inside. There are actually no rules on what to put inside. This recipe includes the fillings used in a classic morcon. Roll the beef slice and tie them using a twine. You can watch the cooking video to serve as a guide on how to tie the roulade. When done, coat the beef roll with flour and sear the outside in some hot oil. Searing will brown the crust and will seal the juices inside.

The beef roulade is now done and it’s time to make the sauce. Start by sautéing the aromatics and then adding the sauce ingredients and seasonings. Add the morcon roll and let it bathe in the flavorful liquid. Baste the morcon from time to time to let it sip in the sauce. Transfer the morcon into a container and continue cooking the sauce until it thickens. Arrange the sauce and the morcon in a serving plate. Make sure to remove the twines and cut the morcon into serving pieces before serving. This is best enjoyed with rice or mashed potatoes on a whole full meal. Happy eating!

Watch how to Cook Morcon