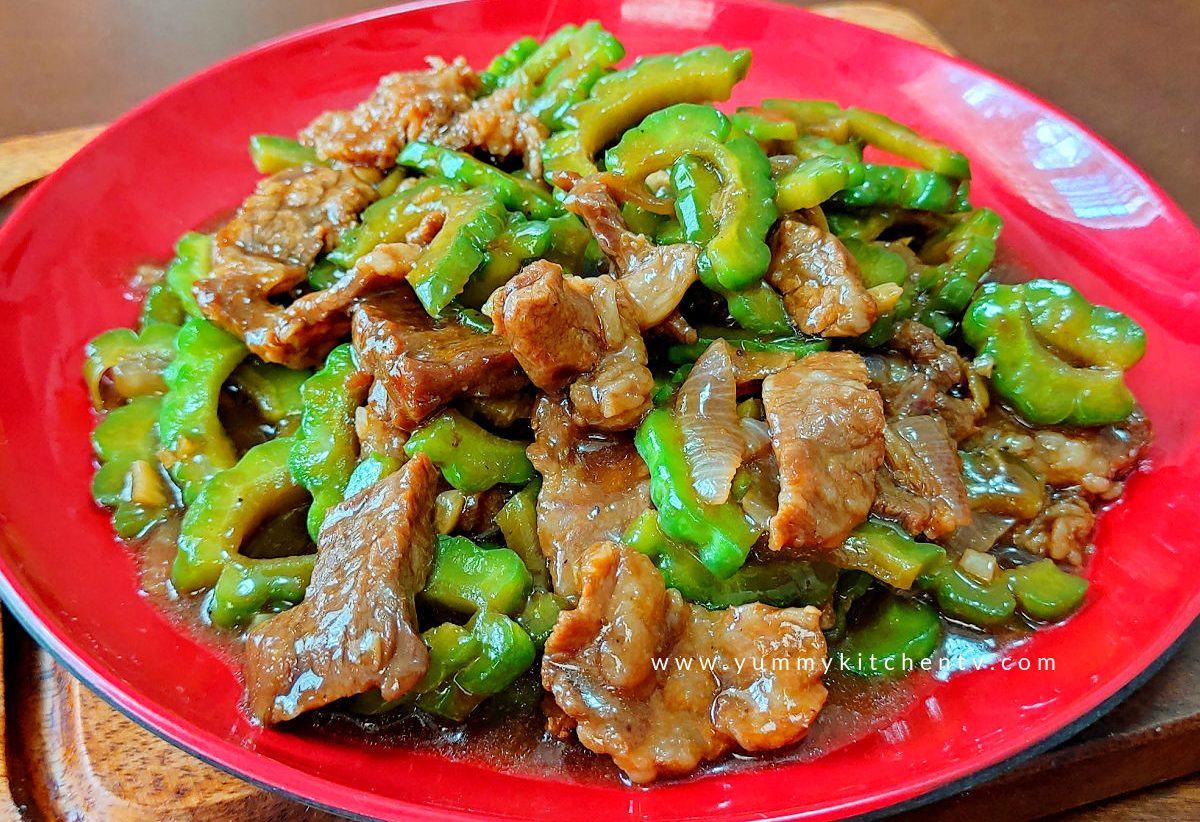 Beef ampalaya is made by cooking thinly sliced beef slices and ampalay slices in a sauce made by sliced onion, soy sauce, oyster sauce, corn starch, sugar and water. This beef ampalaya recipe is best when partnered with hot steamed rice. Yum!. Read and follow the simple beef ampalaya recipe below. Happy cooking!

The king of the vegetables is back! Your favorite ampalaya is so much delicious when served together with beef. Ampalaya is one of the most controversial among the veggies. Not because everyone loves it, but because many people hate it. Unlike other veggies with a mild flavor, the ampalaya has a strong bitter one. And for some, being able to eat ampalaya is a “bragging right”.

Ampalaya is a long, green-coloured vegetable with a wrinkled skin. The popularity of the ampalaya is very evident during the nutrition month. During my elementary years, kids who eat ampalaya are “praised” for being able to tolerate the bitterness of the ampalaya.

In my case, I never get to hate ampalaya even when I know that it’s bitter. For me, it only depends on the cooking. The natural bitterness of the ampalaya is actually tasty, but needs to be lessened just a bit. We have been enjoying ampalaya for a lot of dishes like ginisang ampalaya with egg (the most popular one), rellenong ampalaya, and as a part of pinakbet.

Amplaya is a type of vine, and is very easy to grow at home. Within 60-75 days, you can already have your harvest!

Regarding nutrition, did you know that ampalaya is packed with Vitamin C? Other vitamins and minerals you can get from the ampalaya include Vitamin A, zinc, folate and potassium.

Happy nutrition month! Since July is the nutrition month, each student from my niece’s class were assigned to make a short vlog on a veggie recipe they like. As her fave tita and cook, of course I am to the rescue. The veggies were raffled, and the one assigned to her was ampalaya.

Usual people might think of the simple ginisang ampalaya with egg, but of course we’d like to level up. Let’s make the simple ampalaya a 5-star dish as we transform it to a beef ampalaya recipe! This recipe is a bit similar to the beef brocolli but uses ampalaya for the veggies. I bet you haven’t tried this recipe before!

If you want to introduce ampalaya to someone, or want an ampalaya-hater to love this veggie, you should really try making this dish! With both meat and veggies, kanin nalang ang kulang! You can also try some beef ampalaya with oyster sauce or beef ampalaya with mushrooms!

TECHNIQUES ON HOW TO MAKE NOT BITTER AMPALAYA

There are a lot of tips from our lolos and lolas on how to lessen the bitter taste of the amplaya. Let me share some of them with you.

Reducing the bitterness of ampalaya is quite a challenge. To be sure, you can apply all of these hacks for a surely not-so-bitter ampalaya!

HOW TO COOK BEEF AMPALAYA

Preparing the ampalaya requires extra steps but your effort is surely worth it. Once you’ve tried any of the hacks listed above to reduce the bitter taste of the ampalaya, then the rest of the steps will be super easy.

Before anything else, marinate the beef in a simple mixture of soy sauce, oyster sauce and brown sugar. You can add other seasonings if you like.

Start the dish by sauteing the aromatics until fragrant. Next, saute the marinated beef slices until it changes color. Take note that beef cooks faster than other meats, so be careful not to overcook it unless it might become chewy.

Then, add the sliced ampalaya. It will only take around 2 minutes of stir frying to cook the ampalaya (unless you want it super soft). Don’t forget to season them before turning the heat off.

Serve the beef ampalaya on top of a big bowl of hot rice. Yum!