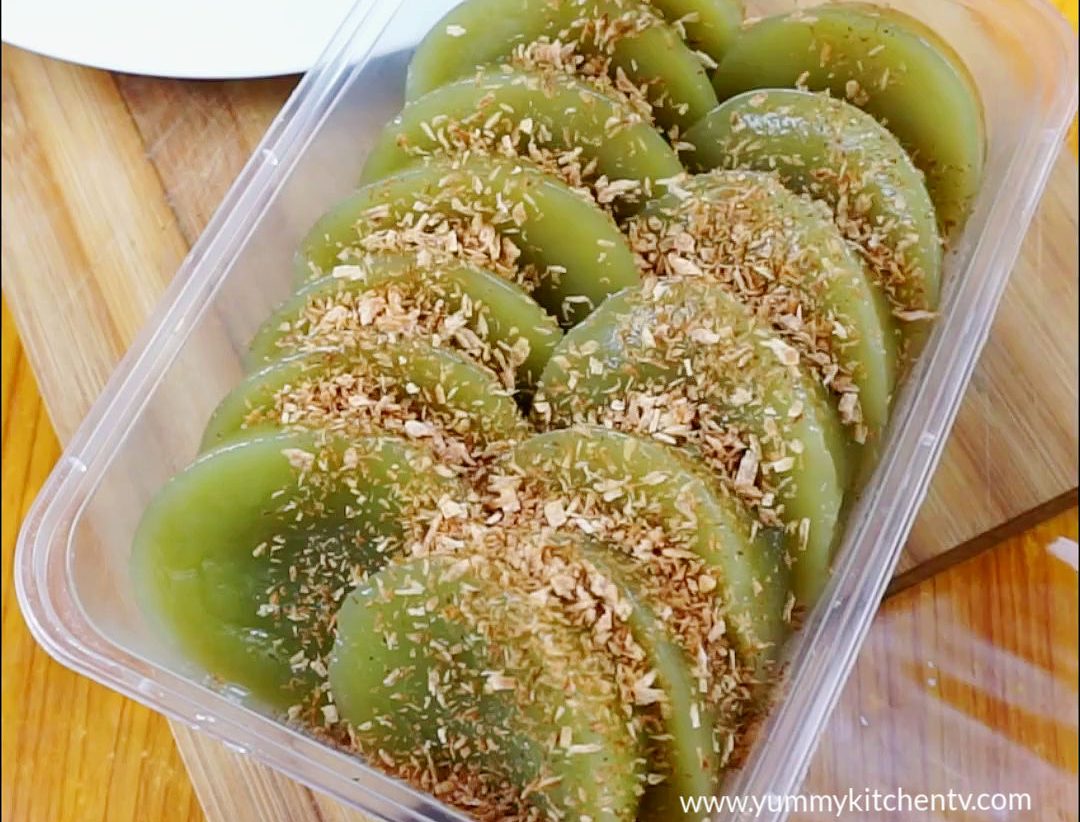 Pandan Kutsinta is a veriation of Filipino kutsinta is made by cassava flour, all purpose flour, sugar, pandan leaves and topped up with desicated coconut. Pandan Kutsinta is green and has the flavor and aroma of the fragrant pandan plant. A Pandan flavoured kutsinta is an exciting way to enjoy our favorite Pinoy native kutsinta. It is usually topped with latik or grated coconut and best eaten with puto.

Unlike most of you, my morning alarm is the bell coming from my favorite manong. He is the one with a big cart full of kakanin who roams around our neighbourhood every day. He is also the one who introduced me to a lot of kakanin varieties I know now.

Puto and kutsinta are two of the most famous kakanins. They are best eaten with one another together with a cup of steaming coffee in the morning. For this recipe, we will talk about kutsinta. Kutsinta is a Filipino native delicacy which is a type of steamed rice cake topped with coconut or dulce de leche. The classic kutsinta is brown, small and round. They are soft and chewy and best for those who likes just a light level of sweetness to their kakanin. Aside from being a breakfast or snack, kutsinta is also served during the New Year where serving sticky foods are believed to hold the family better.

Kutsinta is just one of my favorite kakanin. These small round sticky cakes are literally the small but terrible ones, since just a few pieces will make your tummy full and satisfied. Since my favorite manong stopped selling kakanin, I have been trying to formulate my own kutsinta recipe. I have read different blogs online that there are actually different versions of kutsinta-making using different ingredients. Some versions use a mix of glutinous rice flour and sweet rice flour while other uses a combination of all-purpose flour and tapioca flour. With my recipe trials, I have found that using a mix of cassava flour and all purpose flour gives the right amount of softness and chewiness so that will be the one I will share in this blog.

It was this one random day I met my favorite manong and had a small talk. He can still remember me as one of his suki who always buy a colourful set of kakanin. By colourful, I mean choosing a violet and green puto, some white pichi-pichi, a brown kutsinta and the three-layered sapin-sapin. You know, a colourful breakfast also makes your day colourful. With all of manong’s kakanin, one that greatly caught my attention is his limited edition pandan kutsinta. Pandan is that green fragrant plant which is always used in Asian cooking for its added aroma and flavor. This gave me this idea to make a pandan kutsinta recipe which I will be sharing with you.

HOW TO MAKE PANDAN KUTSINTA

Making a pandan kutsinta is very easy and requires minimal effort. The things to prepare are the pandan flavor and the kutsinta batter. Instead of using store-bought pandan extract, we will be using the classic way of extracting pandan flavor by making pandan water. Simply cut the pandan leaves into small pieces and crush it in some water using a blender. Strain the mixture to only get the liquid. Your pandan water is done.

Unlike other kutsinta recipes, this recipe will not use lye water. The resulting pandan kutsinta will be a soft, smooth and slightly sweet one. To make the kutsinta batter, simply mix all the ingredients until there are no lumps. Pour your batter into your moulders and then the last step would be steaming. For your molders, you can use the usual colourful ones, a glass type or even a silicon moulder. Steam the kutsinta until it looks firm and springy. When cooked, transfer them to a serving plate. The classic toppings are latik and freshly grated coconut. You can also try dulce de leche. Enjoy!