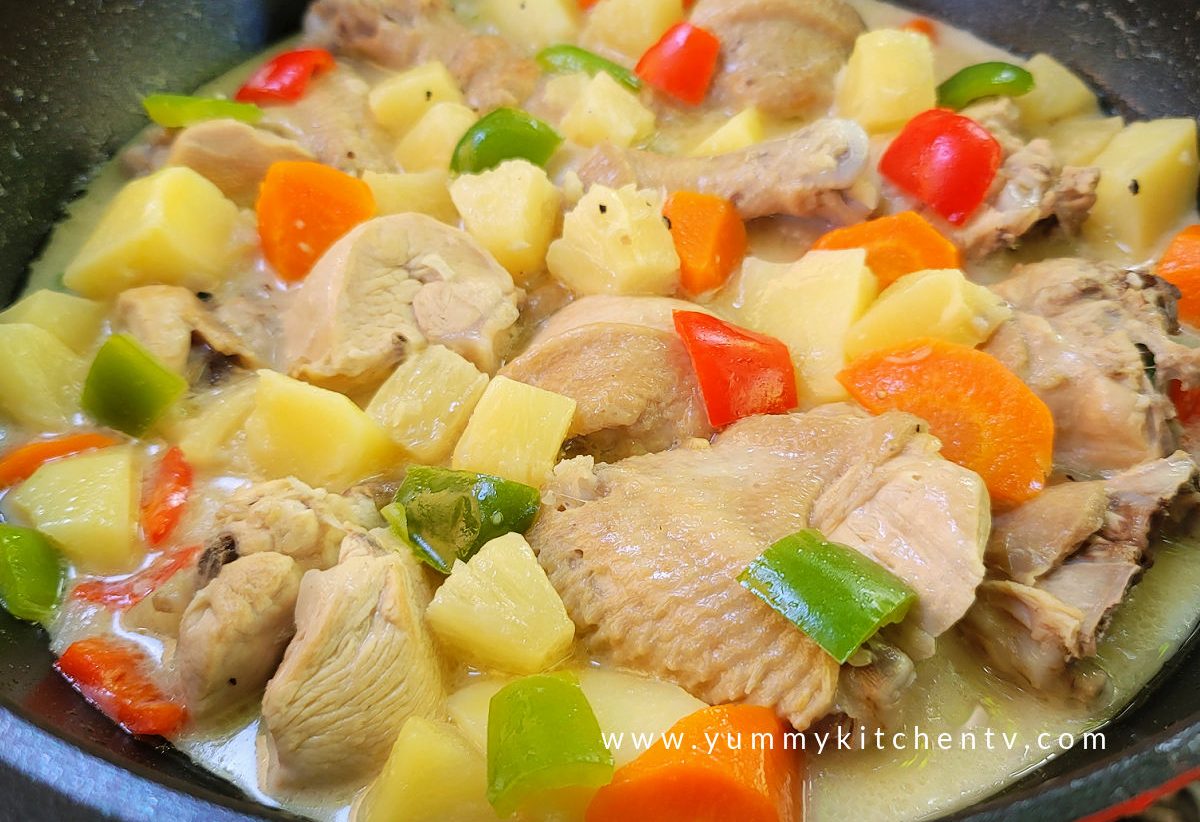 Pininyahang manok with gata is made by simmering chicken pieces in sauce made with Coconut milk, pineapple syrup, pineapple chunks, garlic, onion, potatoes, carrot, green belly pepper, fish sauce, salt an pepper. Pininyahang manok with gata is a classic Filipino Chicken dish famed by the complimenting flavours from the coconut cream and the sour freshness of the pineapples. This is best served with hot steaming rice.

Pineapples are one of the best summer tropical fruits and we love the refreshing feeling  it brings. Aside from being used in desserts, smoothies and shakes, did you know that pineapple works in viands as well?

Some dishes needs some acidity and sweetness at the same time. You cannot get that from a regular vinegar and sugar combination. That’s a power only pineapples can bring. Pineapples have been a part of many dishes (adobo, ginataan, hamonado, sweet and sour) and adds a remarkable flavor to them.

We know coconut cream dishes is one of the usual Filipino favorites. I consider this pininyahang manok with gata (also known as pineapple chicken) as an upgraded version of our gata dishes.

Pininyahang manok with gata is literally one of the OG Filipino classic dishes. If you go to any karinderya in the country, you will 100% see this dish. Everyone knows about this dish. There might be some tweaks in the ingredients (some ingri are added, some are absent) but you’ll know one when you see one.

What I truly love about pininyahang manok is that this dish brings warmth to me. This dish belongs to my list of comfort foods. This is my mom’s favorite dish which made me love them more. I love them best when served with hot steaming rice. If this is gonna be your first time preparing this dish, read and follow the simple steps below.

HOW TO COOK PININYAHANG MANOK WITH GATA

Pininyahang manok with gata won’t be served in many karinderyas if they are difficult to make.

Start by sauteing the aromatics and the chicken. Add the syrup so that the chicken will have time to absorb its flavors. Within 10 minutes of simmering, the pineapple syrup has totally dried up.

Next, add the rest of the saute-ables (potatoes, carrots and pineapple chunks). Although you can use freshly cut pineapples, canned pineapples are much more convenient to use. You may gently crush the pineapple chunks to release more of its flavors. Saute them for a few minutes.

Remember to lower the heat first before adding the coconut milk. Stir them gently to prevent burning. Bell peppers are added last since they are quick to cook. Do a taste test on the veggies just to check if they are tender enough.

If you want a slightly nagmamantikang manok, cook a little more until the sauce is reduced and some oil has been rendered. Serve this with newly steamed rice. Yum!