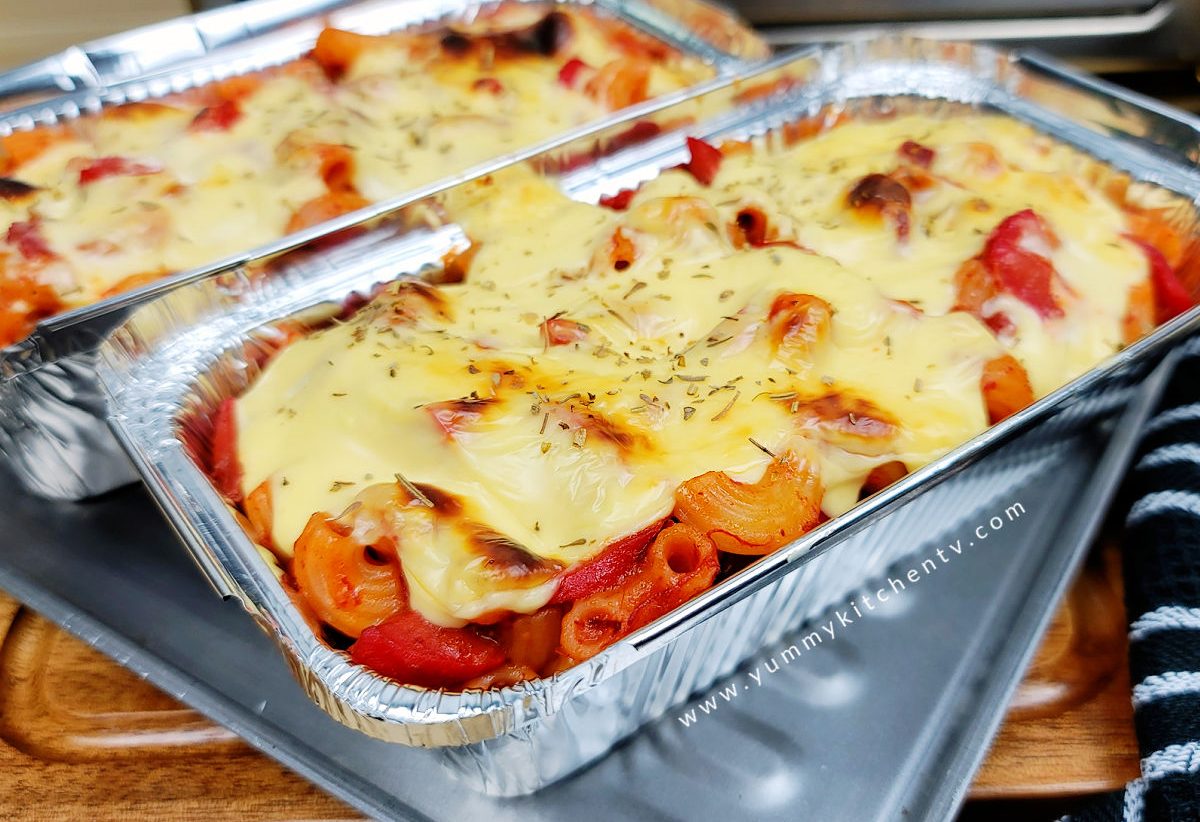 Cheesy Baked Macaroni is Filipino macaroni dish made by baking a macaroni mixture made with macaroni, corned beef, hot dogs, onion, garlic, spaghetti sauce, beef broth, red bell pepper, all pupose cream, sugar and is topped with cheese. This creamy and cheese macaroni recipe will give you an idea on how to maximize the flavours of the macaroni while minimizing the worry on the budget

Cooking macaroni might seem like having too many ingredients. So many people assumes that you need a lot of budget in order to make some delicious ones. For this article, I’m gonna show you how to make a macaroni which is yummy and tasty and is surely easy on the pocket.

Macaroni is one of our usual family snack since we have many dry pasta stored in the pantry. Among all my dry pastas, elbow macaroni are usually the last ones to be consumed. I usually make macaroni dishes usually at the end of the month, using with whats left off the pantry (usually canned goods).

Baked macaroni is one of my top favorite pastas. If you will be making a top tier macaroni pasta, you would really assume that you need to have a budget to make some. Here in this recipe, I will be sharing some secrets on how to maintain the quality of a baked macaroni while staying on a budget.

HOW TO COOK BUDGET FRIENDLY MACARONI

Although I had included the price of the ingredients used in this recipe, please allow some cost deviations as the prices of commodities varies from place to place. I used my favorite local grocery store for my food costing.

‘My first tip in achieving a budget friendly dish, choose locally made brands. These brands are much cheaper because they do not have extra charges on importing but have the same quality as those imported ones. For this recipe, all brands used are local ones. I am not promoting any brand but the brands of the ingredients I used can be seen from the cooking vlog.

In choosing meat, I recommend looking for alternatives if the budget is really tight. So instead of buying raw pork meat, we can try to use canned goods like corned beef, meat loaf and others.

To start with out recipe, lets cook the macaroni pasta. You can choose any shape you want, but I used the usual elbow macaroni for this one. Follow the package instructions in cooking the pasta. You may also do the taste text just to confirm that the pasta is really cooked.

Next, lets prepare the pasta sauce. All of the ingredients of the sauce will be sauteed together first. In this recipe, I used corned beef and hotdogs as my meat. Although these are precooked, it is important to saute them wisely until browned. Tomato sauce are usually used for pasta. But in this recipe, I used spaghetti sauce for a lot of reasons. It is much cheaper than tomato sauce and are already seasoned for spaghettis. Also, most spaghetti sauces are sweeter, and more appropriate for the Filipino palate. Combine the meats and the spaghetti sauce and allow them to cool a bit first before combining with the macaroni pasta.

Now, lets make the cheese sauce. The cheese sauce is both creamy and cheesy at the same time sine it is made with all purpose cream and grated cheese. Just remember to cook it at the lowest possible heat so that the milk would not scorch.

At this point, you can already eat the macaroni pasta topped with the cheese topping. But if you have an oven or a toaster, baking the pasta for a few minutes, toasting the cheese topping, will really give added a smokey and baked taste to the pasta. Baking is optional but is highly recommended.