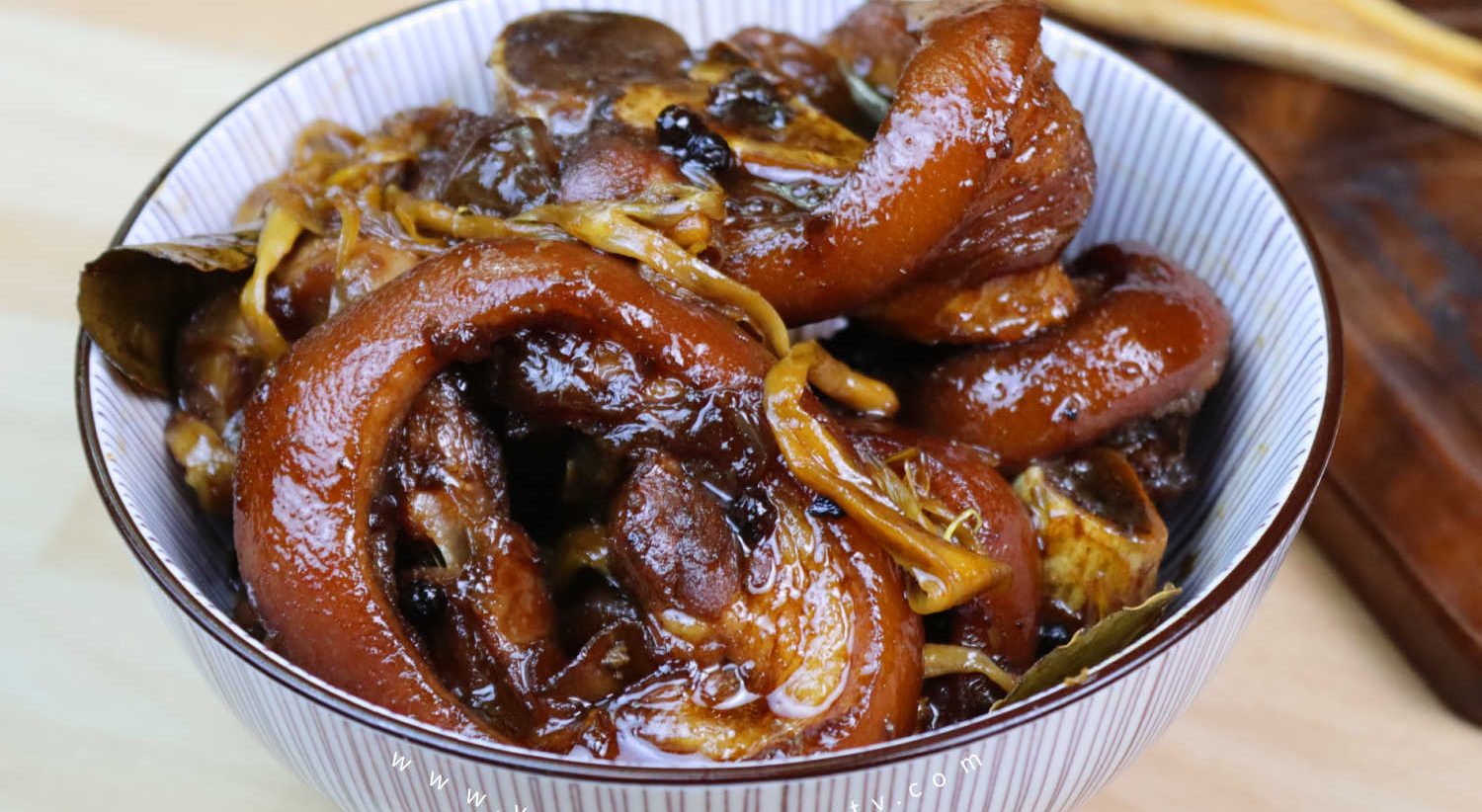 Paksiw na Pata is delicious Filipino dish made by pork hock pieces, braised in a mixture made by onion, garlic, pepper cone, soy sauce and bay leaves. This meat is further cooked after adding brown sugar, banana blossoms, vinegar and seasoned with salt and pepper. It is a delicious Filipino dish that is best eaten with warm white rice

Paksiw na pata is one of my specialties and favorites. Given that it is almost all fat, I only prepare this for special occasssions. Whether how much I love this dish, my veins, my heart and my cholesterol levels says nope nope nope.

The word “paksiw” is a cooking method wherein the meat is cooked in vinegar and garlic. I then learned that soy sauce is just added for more flavors and umami. So regarding me and my friend’s dilemma, both of us are correct as long as the dish is vinegar-based first, and then the rest depends.

While comparing the dishes, I also thought that paksiw na pata can also be compared with the classic adobo. Both dishes are made with a mixture of vinegar and soy sauce. Nevertheless, paksiw na pata has banana blossoms in it which makes it unique and outstanding.

The best paksiw na pata is the one where the fat melts in your mouth in every bite. To learn hacks on how to do this, read the recipe below and try making one today!

HOW TO MAKE PAKSIW NA PATA

To make the best paksiw na pata, grab the best pata front you can get from the market. Pata front are the front legs of the pig. Most of them are sold as a whole leg but you can specifically ask the butcher to cut them for you.

Unlike the famous crispy pata, the skin of our paksiw na pata will be super soft and a bit sticky. Most of the meat in a pata are skin and some fat. A good way to tenderize this is through boiling for around 10 minutes. The pata should be tender but not falling apart.

The next thing to do is adding flavors to this tender skin and fat. Sauté your aromatics and the pata pieces. Add the rest of the seasonings. Make a little broth by adding water. Let the pata simmer in the flavorful liquid. This may take you around 45 minutes. You might notice that the sauce has also been reduced. Make the sauce sweet by adding brown sugar. For the final part, add the vinegar but do not stir too early to avoid the raw taste of the vinegar. After 10 minutes, you can mix it a bit until everything is set.

Serve the paksiw na pata with a lot of hot steaming rice! Perfectly paired with some tropical juice.