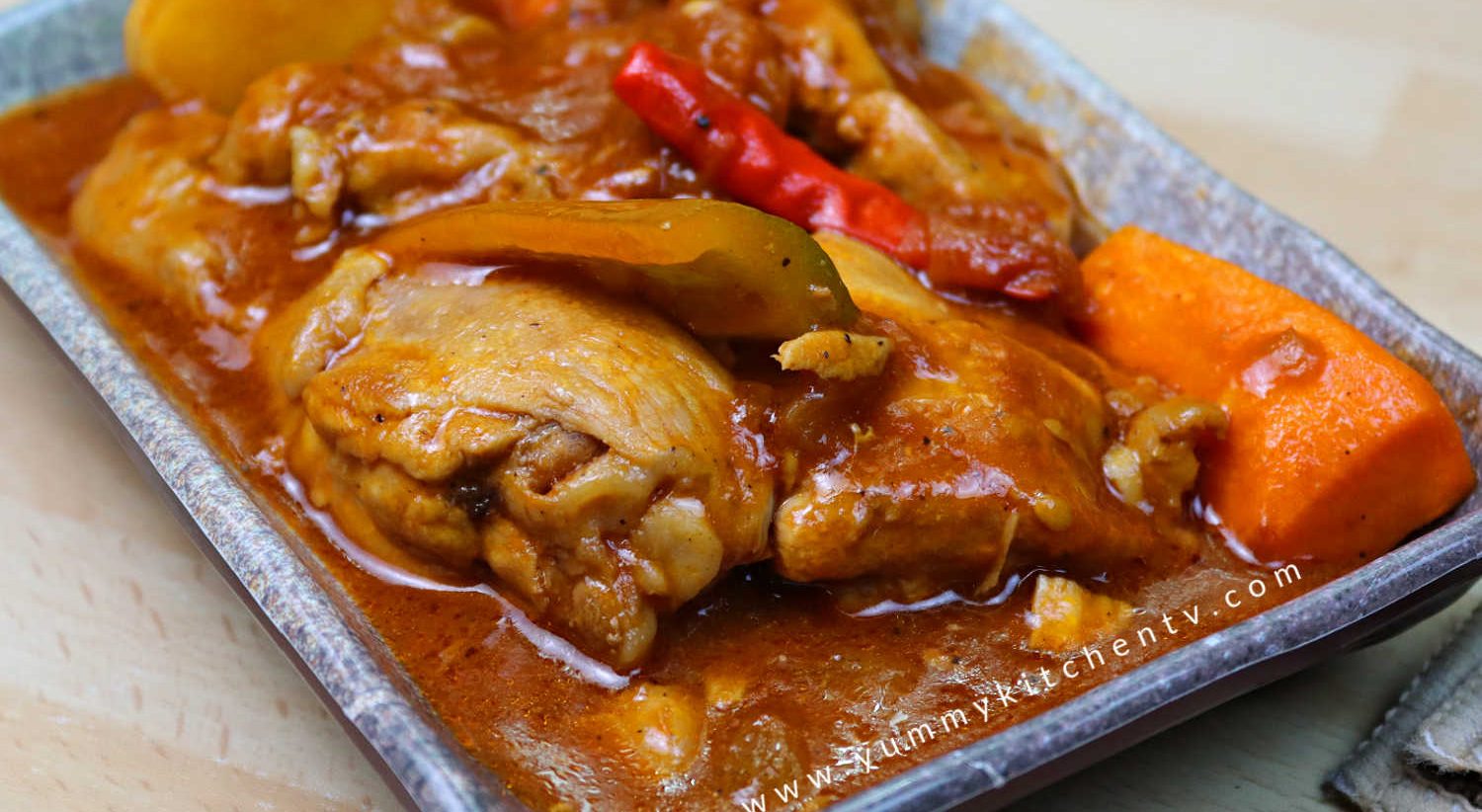 Chicken mechado is a tomato-based stew wherein chicken pieces are braised and slow-cooked in tomato gravy together with potatoes, carrots and bell peppers until they are soft and falls of the bone. In this yummy kitchen Chicken mechado recipe will show you how to cook Chicken mechado in very easy and simple steps. This is a healthier version of the classic beef mechado as it uses chicken with lesser fat. Best paired with a bowl of hot steaming rice!

Whenever fiesta is coming, just like the pork mechado, chicken mechado is a dish we always serve. I don’t know what guide Filipino celebrations is following but it is really not complete without a tomato-based stew. Aside from this, chicken mechado is often one of our daily meals. We really like having meat and vegetables in one dish. We often use chicken to make our dishes a bit “healthier”. I am always the one assigned in making this dish and one thing I love about using chicken is that we can enjoy our chicken mechado in less time as chicken cooks faster than beef.

Mechado is more a feast-y dish as it includes a lot of flavors and colors. If you’re planning to make some chicken mechado, use both red and green bell peppers. For a complete recipe, read the procedures below. Happy cooking!

HOW TO MAKE CHICKEN MECHADO

Chicken mechado is just like preparing your classic mechado. But instead of beef or pork, we will use chicken. You can use whatever part is available but the cuts with bones are the best ones for me. They come out really tender and moist when cooked. Marinate the chicken cuts in a mixture of soy sauce, calamansi juice and pepper. This is the classic marinade which makes any dish automatically flavorful.

The three basic ingredients which are commonly seen in a mechado aside from the meat are potatoes, carrots and bell peppers. Other versions include green peas and sliced hotdogs for a complete feast. For this version, we are going to use the three basic ones. Before we start cooking the mechado, stir-fry your vegetables a bit until it browns a little. They will fully cook later in the sauce.

Okay, let’s officially start cooking our chicken mechado. Start by sautéing your aromatics and the marinated chicken.  Searing help seal the juices so the chicken will be moist for later. Add some water, the marinade and the tomato sauce. This will be our mechado sauce. The last thing to do it to add the stir-fried vegetables back to the pan and let it simmer until everything is set. Grab a big bowl of rice and enjoy your chicken mechado!

Some like their mechado oily or “nagmamantika”. If you’re one of them, all you needed to do is to simmer for a longer period of time until the oil from the tomato sauce is released. At the same time, your chicken will also be super duper ultra soft which will fall off the bone. But in case you are doing this one, add your vegetables at a later time during cooking so that they won’t be too mushy.