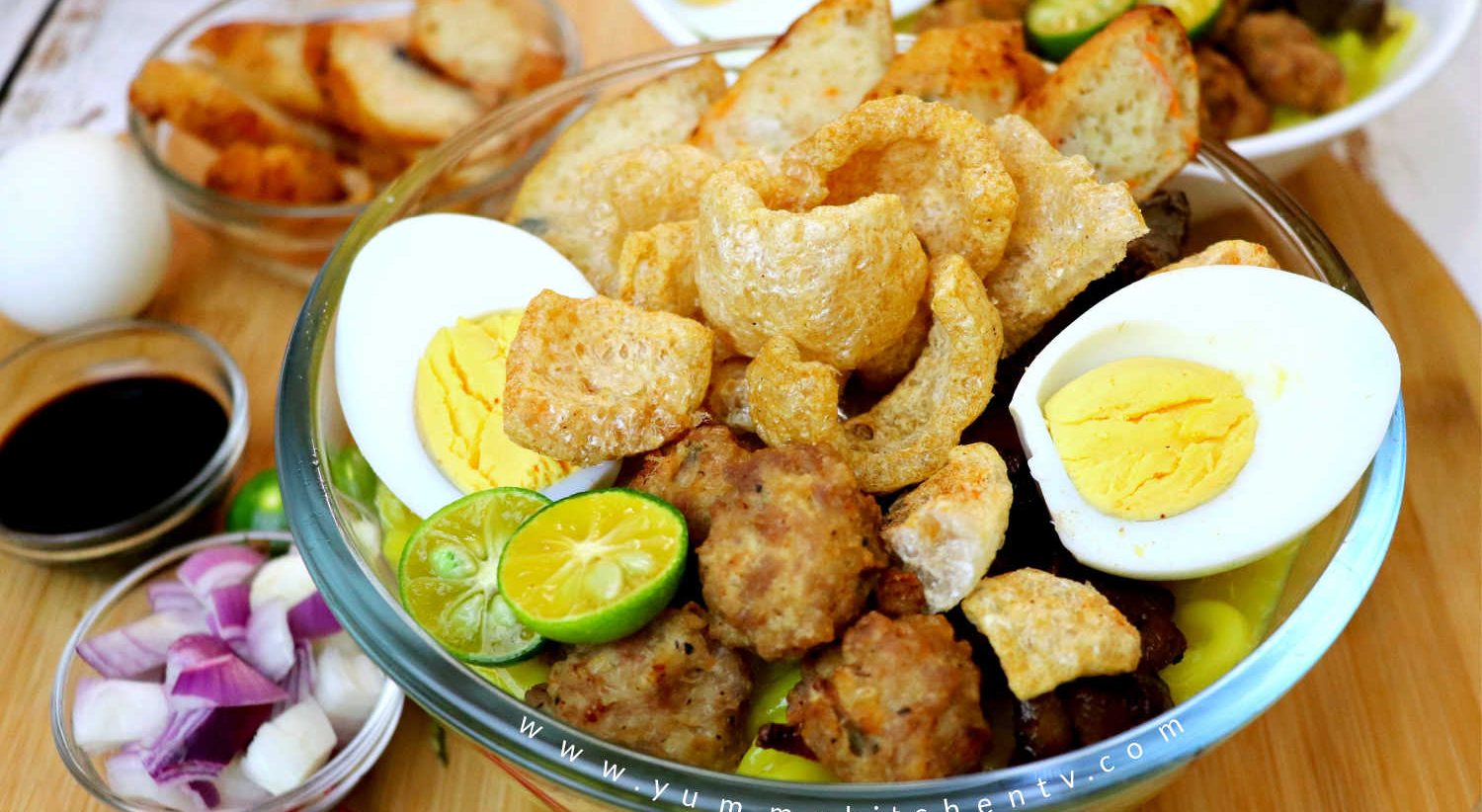 Ala-eh! Missing that Batangas lomi you had from your Batangas trip years ago? Try this recipe to make an authentic loming Batangas at the comfort of your homes!

Lomi is a soupy noodle dish made with thick noodles in thick starchy and egg-y caldo. It is believed to be based on the Chinese noodle dish “Lor Mee” which shares the same ingredients and preparations. What makes lomi special are the variety of toppings added to it before serving. The more toppings added means the more special the lomi is. Some of these toppings include pork meat, liver, crispy pork rinds and meatballs. Modern lomi versions also include toppings like fried siomai, lumpia, shrimp, fishballs and other fried items.

As a full-blood Batangueno, I am proud to say that despite a lot of versions of lomi, the Batangas Lomi will always be the best. Lomi was known to originate in the city of Lipa in Batangas. If you want an authentic taste of lomi, just go to any town in Batangas. The towns are competing onto who prepares the best lomi. But for me, all of them are the best!

With the ongoing pandemic, it is still best to stay at home and be safe. But if you crave for tasty lomi, Yummy Kitchen got you! Here is an intensive and detailed Lomi Batangas recipe. The recipe may look long but it can literally feed a bunch of people. Make this lomi in the morning and you will have food to eat for the whole day. Try this authentic Batanagas Lomi recipe and enjoy!

HOW TO COOK LOMI BATANGAS

Everything in an authentic Batangueno’s Lomi is special. If you would take a peek on the procedures, you will notice that the steps were categorized based on how to do a single component of the lomi.

The first thing to prepare is the caldo or the broth of the lomi. This is where we will boil the lomi noodles later. To make this flavorful broth, simply boil the pork bones for hours until the pork flavor is infused in the liquid. You may skip this step if you have a pre-made pork stock. You may also use chicken stock as a substitute.

The lomi toppings actually depends on your toppings of choice. It includes a variety of food items and what I included in this recipe are the basic ones. For the pork meat and liver, marinate them in a mixture of soy sauce and pepper and then fry. The meatballs may be prepared from scratch by mixing ground pork, aromatics, egg and flour. Simply mix them and make into balls and then fry. If you have read our recipe on the Chinese kikiam, you can use them as a lomi topping. Simply fry the kikiams and they are good to go. Boil a piece of egg and slice it into two. This will make an appetizing look for the lomi. Also prepare some chicharon. You may crush them slightly or use them as it it. When your toppings are prepared, then it is time to make the highlight of the dish—the noodles.

Lomi noodles have this amazing feature of being thick and yellow. These noodles are very identifiable when you go to the supermarket. Start cooking the lomi noodles by sautéing some aromatics. Add 8 to 10 cups of the flavorful caldo we made from pork bones. Boil the lomi just like boiling other noodles. When it’s already soft, add the slurry to make the sauce thick. After a few minutes, add the beaten eggs while continuously stirring. The eggs must be well-distributed within the noodles. This will also make the sauce thicker.

The lomi noodles and the toppings are now done. Assemble the lomi by adding the toppings on top. The lomi is not complete without the soy sauce dip. This is simply made by combining the soy sauce, chopped onions, chopped chillies and calamansi in a small bowl.

To have that authentic lomi batangas experience, let me share how we eat lomi in our place. After you assemble your freshly-cooked lomi, it is usually still hot. Grab a small platito and put just a small amount of lomi. Grab your soy sauce dip and only adjust the taste of the lomi in the small platito. In this way, the lomi cools faster and adding a lot of soy sauce dip to the big bowl of lomi will be prevented.

For the Bone Stock:

For the Lomi Toppings: