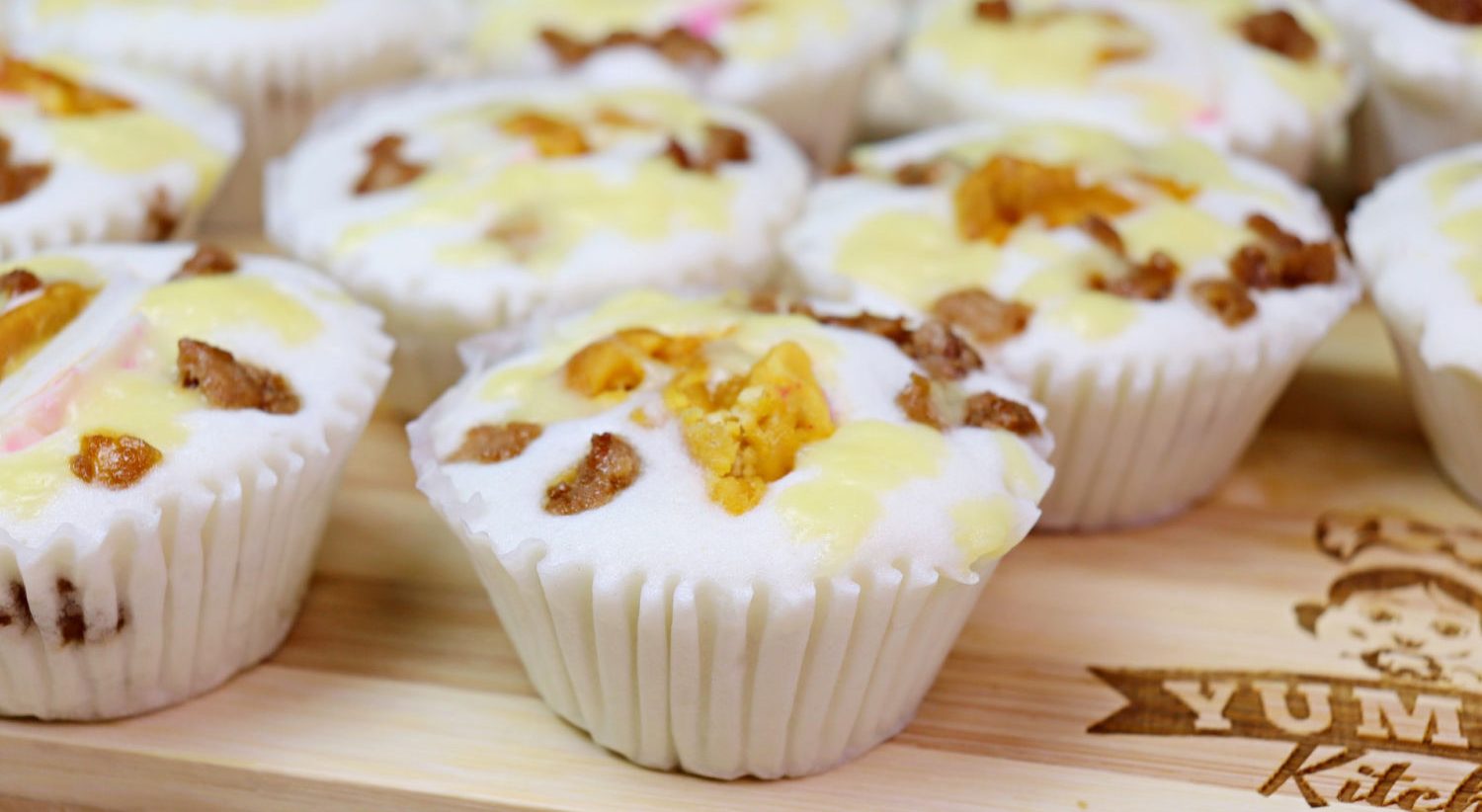 Puto paos are small cakes of goodness with sweet and moist pork filling topped with salted egg and cheese. It is a creative and special type of puto which is birthed from the combination of much loved snacks—siopao and puto. This fingerfood delicious treat can be eaten as a snack or can be accompanied by other savoury dishes like dinuguan. It is best enjoyed with your family and friends and is always almost present in most occasions.

Siopao asado and puto are two of the most favorite Filipino snacks. Can you imagine the power when these two are combined? This cross-over is called Puto Pao. I guess the person who invented this dish cannot choose between the two snacks and therefore fused them together. If you can eat them both at the same time, why not?

Siopao asado is admired due to its sweet and moist meat filling. One of the classic traits of puto is its light and fluffy dough. The puto is used as the bread for the puto pao instead of the buns of the siopao. The best-tasting puto paos are the ones with the touch of genuine love—the ones made at home. Preparing and cooking the puro pao may take you some time, but the results is worth the effort. If the idea of puto pao makes you crave for it now, start making your marketlist and get ready for some puto pao cooking!

HOW TO COOK PUTO PAO

Cooking the puto pao is like cooking a regular puto but adding some filling inside and more toppings. First, you prepare the asado filling.  The siopao asado filling can be made from any pork cut which is cut into small cubes. For our convenience, we will use ground pork in this recipe. Season the meat by sautéing it in a pan with onions and garlic. When the meat has lightly browned, add the soy sauce, oyster sauce and brown sugar for the classic sweet asado flavor. To make it saucy, let’s add a little slurry. A slurry is made by dissolving cornstarch in water. Stir the asado filling and then set it aside.

Now it’s time to make our puto batter. The classic puto uses rice flour but for our puto pao, we will use cake flour. This can make the puto pao airy and fluffy. Strain all the dry ingredients in a bowl to remove the lumps. Add the water little by little until you achieve the desired consistency. Another ingredient that can make our puto pao soft and fluffy is the meringue.

Crack some eggs and separate the yolks and the whites. For the meringue, we are only gonna use the whites. Whip the egg whites using a mixer until frothy. Gently add the sugar and continue whipping until soft peaks. A technique to know if the egg whites have achieved soft peaks is by flipping the bowl you are using. If the whites are stiff and does not drop, then it is done. Gently fold the meringue into the puto batter into one direction only to incorporate air into the batter. Congrats! The batter is now done.

The way puto paos are cooked are similar to regular puto. First prepare the puto moulds with liners and fill it with batter. Do not forget the asado filling in the middle and your favorite toppings on top. I put some of the asado fillings as toppings for more meaty goodness. Steam the puto paos for 12 minutes and then do the fork test. Remove the puto paos from the steamer and consume it hot. Best-tasting! Yum!

Watch how to Make Puto Pao

Remarks
This Puto Pao recipe will show you how to make Puto Pao with step by step instruction to make tasty and fluffy Puto Pao for your family. Puto Pao is very popular and delicious kakanin in philippines and it is a streamed rice.normaly puto pao is made with cheese recipe