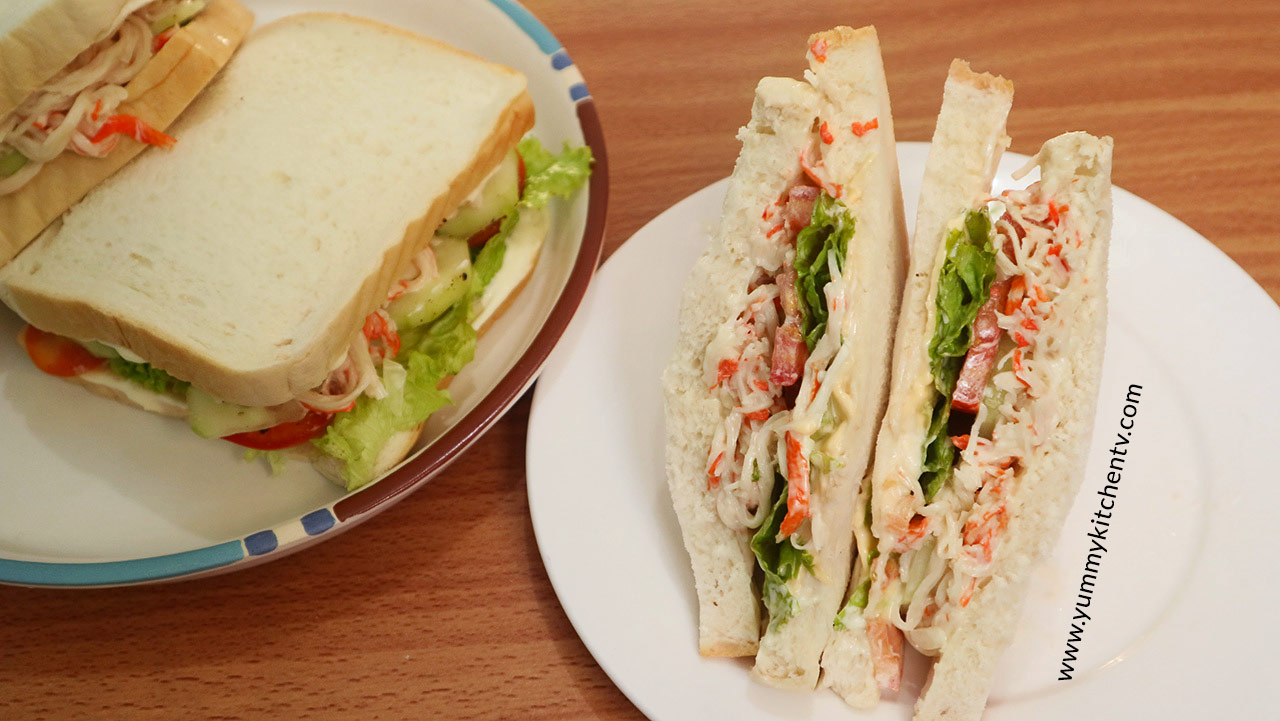 A simple savory sandwich that that has a refreshing taste to it. From cool cucumbers, juicy tomatoes, savory mayonnaise and kani, a sharp taste with a little crunch from the onions, lettuce, sandwich between two soft white bread, and who wouldn’t want to add a slice of cheese in here?  Crab sandwich is a tasty little refresher to eat for breakfast with a hot cup of coffee or tea, or an afternoon snack to keep your energy up for the rest of the work or school day.

How the sandwich idea started?

From savory to sweet, to having different fillings, meat choices, sauces like mayo or ketchup? to the type of bread used, the Sandwich has been a staple in many households who lack time in the morning, just need a quick to do snack in the middle of the day, or sometimes turned into a dessert for a midnight snack. Sandwiches has been made since the 19thcentury ad was made by Americans to avoid wasting food, the sandwiches back then were made with food scraps like leftover turkey, ham or chicken that would be shredded and mixed with mayonnaise, and relishes like pickles, celery and olives, then served over a lettuce. Social and economical changes paved a way for women to enter the workforce and a lady’s lunch hour had limits. Lunch counters came up with an idea of offering salads in between two pieces of bread which sped up turnovers and encouraged the idea of lunch on the go.

What is imitation crab good for?

Crab like many seafood are expensive no matter where your from. Sold as a whole, just crab legs, or only crab meat you’ll find yourself wondering if the price is worth it. Especially if it’s off-season, many reasons on why the crab is expensive is that it’s easily perishable, hard to catch as it’s a dangerous work and there are many regulations on how to catch a crab, the regulations also depends on what type of crab you catch which also impacts how it will be sold, the supply and demand also comes in, the supply is mostly relatively low while the demand is high even as it doesn’t have much meat compared to a fish. Many take advantage of living near an area where there is a lot of seafood to get a better or fairer price.

Imitation crab or ‘Kani’ is has been popular for decades and can be commonly found in dishes like salads, sandwiches, hot pots or soups, shabu-shabu, sushi, crab cakes, and many more. Imitation crab is made from ‘surimi’ which is a paste made from other fish mostly Pollock, deboned, and washed, mixed with other ingredients, then formed into different shapes or colored differently depending on that its trying to mimic or formed into as a décor for soups and rice. Surimi is usually formed and colored a lighter pink or white inside and a reddish orange combination on the outside to look similar to a crab, lobster, Japanese eel, or shellfish. And the ‘kani’ name came from the Japanese word that means ‘crab’. The kani is fromed, colored, and heated to keep its form and packaged. Kani surimi, which is the full name that translates to imitation crab, has been used in Japan ever since the 14thcentury, made with artificial flavoring and MSGs to give it a closer taste to crab. While it doesn’t compare to the real thing Kani is still a tasty and cheaper substitute to the King Crab.

This imitation crab is sometimes called ‘ the hot dog of the sea’ was patented and produce in 1974 as ‘Kanikama’ and was sold as crab sticks. It was in 1977 when it was introduced to Berelson Company from San Francisco California that it launched internationally. Marketed under names like ‘Krab sticks’, ‘Sea legs’, ‘Ocean Sticks’, and ‘Imitation Crab Sticks’ but now has legal restrictions of being called ‘crab sticks’ as they do not usually have crab meat inside.

Make your afternoons better with a tasty filling sandwich that just wakes you up to get ready for the rest of the workday! Not only does it take just a few minutes with minimal ingredients to make its also so tasty and easy to do you can prepare the filling any time and just assemble it the next morning.

Everyone has their own choice for the ‘perfect sandwich’ from buying them at fast food chains, to sandwich stalls, a nothing can beat a homemade sandwich made in the comfort of your own home. This Crab sandwich has a satisfying flavor with a cool note from the cucumbers and tomatoes, lettuce to keep the juices from getting the bread soggy, mayonnaise to act as a paste for the veggies and other fillings. Make this sandwich recipe with a side of roasted tomatoes or fries to complete the vacation like feel that this crab sandwich just resonates.