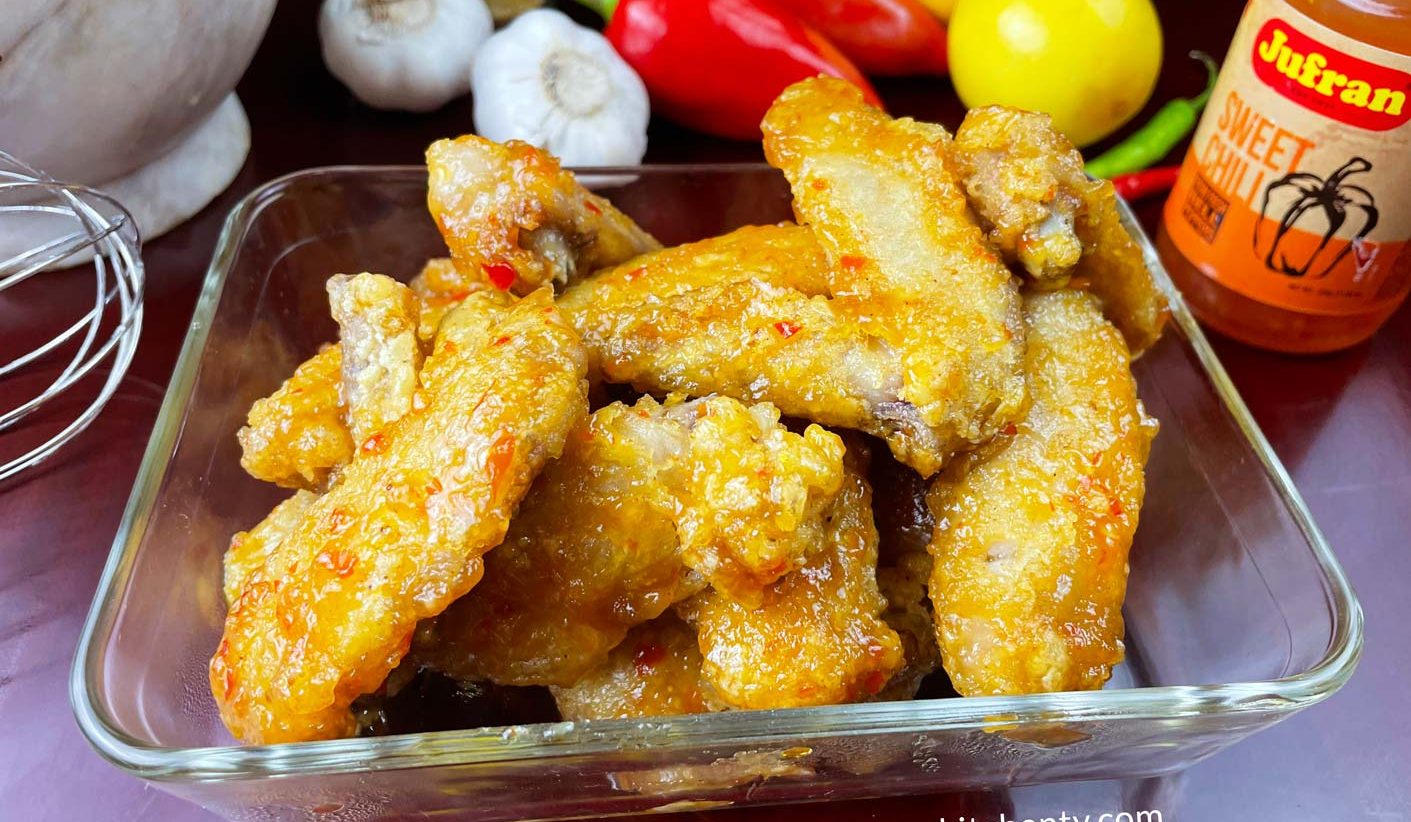 This Sweet Chili Chicken Wings are sweet, spicy, crispy fried chicken wings marinated in a mixture of all purpose flour, corn starch, onion powder, paprika, turmeric powder, and salt. It is further tossed in delicious sauce made with sweet chili sauce and melted butter. The sweet and spicy crispy sauce layered over another crispy layer of batter and chicken skin, this deliciously addicting Sweet Chili Wings recipe will make you go ‘wow’!

Sweet Chili sauce or Thai Chili Sauce or ‘nam chim kai’ in Thai was and still is a popular chili sauce condiment used in Thai, Malaysian, Afghan, and Western cuisine. Typically made from red chili peppers like red or Thai jalapenos or Fresno chile, sometimes with the addition of garlic, and or fish sauce, turned watery by using rice wine vinegar, with a sweetening agent like a fruit, honey or refined sugar. Popularly used as a dip for dumplings or fried dishes like prawn toast, okoy, lupiang shanghai, egg rolls, chicken wings, spring rolls, some even use it to pair with lettuce wraps, meatballs and other dishes that you’d like some additional sweetness and spiciness to.  Seeing the sweet chili sauce as packages when buying a Chinese or Filipino based dish, as a barbeque ingredient, and dipping sauce in popular fast food chains like McDonalds and Wendy’s. there are just so many wasy to incorporate and use the sweet chili sauce with.

Sweet Chili sauce and the Filipino version, the ‘agre dulce’ is made from mixing cornstarch, water, salt, sugar, something tangy like banana ketchup, tomato ketchup, or pineapple juice or pineapple concentrate for a really sweet and tropical refreshing take. Once mixed, these are heated and simmered till thick in texture. With a spike of Labuyo chili to add in a bit more heat. The ‘agre dulce’ came from the Spanish Philippine word with agrio meaning ‘sour’ and dulce which means ‘sweet’. Its is also named agri dulci in Chavacano a Spanish based creole language spoken in the Philippines especially in Zamboanga City, an island group in the Mindanao. They use the term to describe dishes cooked with the sweet and sour sauce. While there are many more Chinese restaurants across various countries from Oceania, North and South America, East Asia and Southeast Asia, and Europe have been using sweet ad sour sauce as a dish in fried chicken, deep-fried topped with pineapples, carrots, pickles, and green pepper. In French cuisine, in traditional French cooking, they prepare the sweet and sour sauce by immersing a mix of ingredients, or food with a good amount of sauce.

The Fried chicken and sauce combo

Fried chicken wings are a staple at some bars, fast food restaurants and maybe at home to prepare for movie nights or game nights. In this recipe, all you need to do is prepare the flour mixture filled with spices like cumin powder, paprika, turmeric powder, seasoned with salt, cornstarch and all purpose flour. The chicken is dredged nicely making sure everything is covered. Fried into a nice golden brown, taken out to cool while you’ve made a buttery sweet chili sauce by melting the butter in another pan, and adding half of a chili sauce. The butter and heat help crisp up the chicken again while the sweet chili sauce makes almost like a caramel like crust over the chicken wings. once the sauce is almost gone and all the chicken wings are fully coated, take them out to serve on a plate fresh off the pan.

Try out this delicious finger liking good chicken wings recipe. And find yourself enjoying your weekends with a crispy chicken dish to chill with.

While sweet and sour sauce are frequently served at Chinese restaurants or Thai based restaurants or fast food chains. There are so many ways to incorporate the sweet and sour chili sauce. One of them is adding them as a flavoring for some crispy chicken wings. Tossing the already fried chicken wings that were seasoned with a spiced dry flour mixture, cooked to a golden brown crisp outer layer, in the thickened sauce, tossed till all the chicken wings are evenly coated with the glistening sweet and sour sauce. ready to be placed on a platter and served as a side dish, main dish, or a snack with other party favorites or a cold glass of beer to watch movies and sports games with.