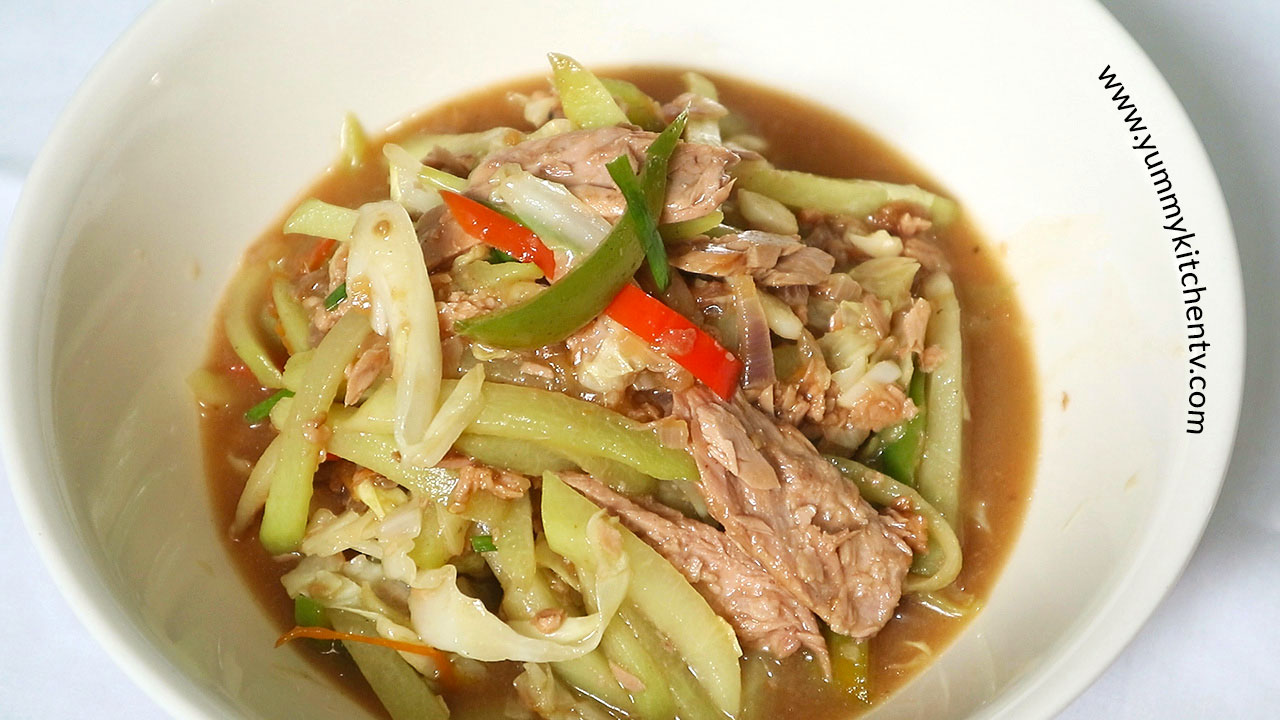 By YummyPosted on September 29, 2021September 4, 2022
Jump to RecipePrint Recipe

This tuna, sayote, and cabbage mix is a healthy toss of savory flavors, with all the colorful vegetable benefits you need to make a complete meal. In this recipe, you’ll only need one pan, a few moments of mixing and tossing, and you’ll have a satisfyingly delicious budget ulam to pair with a steaming bowl of rice! Try out the Tuna with Sayote and Cabbage recipe below and see how you can transform one can of tuna into a tasty main dish with in just a few steps!

Why do people use canned tuna?

Canned fishes or canned good are dishes, cured or pre-cooked and packaged into steel or aluminum containers and sold in your local groceries found in the dry goods or canned goods aisle. It’s a stable and staple quick way to get a meal, ingredient, or snack on the go or when you just need something to partner up with rice or occasionally pasta. Canned tuna came from the same source. Fresh tuna is frozen when caught, thawed when it’s ready for production, inspected and cooked in a large steamer baskets and loined. The loins are cleaned, with the bones and skin removed, sliced to fit and be placed in a can or pouch. In some companies the production of tuna starts with frozen tuna added into the cans and is cooked only once which helps retain the natural nutrients and flavor while others add oil, vegetable broth, brine, sunflower oil, olive oil, spring water to add flavoring. The method of cooking or processing method when the fish is added is what helps preserve this.

Tuna is a great source of nutrients; including protein, vitamin D, and selenium. According to some dieticians whether you eat tuna fresh or canned those nutrients you’ll be benefiting from will still be the same. Albeit having a slightly lower concentration in the canned tuna compared to a freshly caught or frozen one. Great for getting those omega-3’s and DHA which are important for heart health. Vitamin B and niacin found in tuna are also great for the skin and nervous system; other beneficial nutrients include calcium for bone health. Magnesium needed to get energy. Vitamin D to support not only the immune system, and brain function, but bone health as well. There’s no one that can deny the convenience of the canned tuna, from being healthy to being a meal in itself. Canned tuna has been popular ever since.

How canned tuna is used and Tuna with Sayote and Cabbage

The canned tuna came after it’s predecessor the canned sardines. The sardine business during the late 1800’s to early 1900’s were doing so well. The trade of these were expanded from the East to West coast. In this time, tuna were seen as a ‘trash fish’. During the popularity of canned sardines, the availability of these decreased. And among the experimented fish to be canned were the albacore tuna. And in 1904, the first canned tuna was produced. Many who preferred fish that were not to ‘fishy’ came to enjoy the tuna as when it’s steamed it turns into a nice white color and has a pleasant mild flavor. The canned tuna production increased by 1914 with early advertisements claiming that it ‘tasted like chicken’ that came from the ocean. Praised for its low fat and high protein, being able to be shelved for a long period of time, and the lower price tag compared to its fresher counterpart, plus the convenience. Many had believed that it was a great innovation and scoured the stores to stock up. Additionally many recipes for that needed canned tuna were abundant, like casseroles, sandwiches, salads and many more.

The canned tuna is truly an ingredient that doesn’t break the bank, can keep up with your lifestyle and can be brought anywhere eaten at anytime, and incorporated to any dish that needs a little bit of fish or meat to get that savory taste.

Tuna with Sayote and Cabbage

A satisfyingly savory and healthy veggie filled dish with tuna.

Canned tuna isn’t just for topping over crackers to eat as a snack, or just a staple in your pantry that you take out to top over rice to make an instant meal. This recipe is an inspired dish that just needs less than 10 minutes of your time, and a few vegetables to give you an ungraded healthy dish that completes all your needs. From fibers in the cabbage and spring onions, vitamins and minerals from the red and green bell peppers, sayote, onion, garlic, and tomato. This dish will surely fill you up with all the nutrients you need!