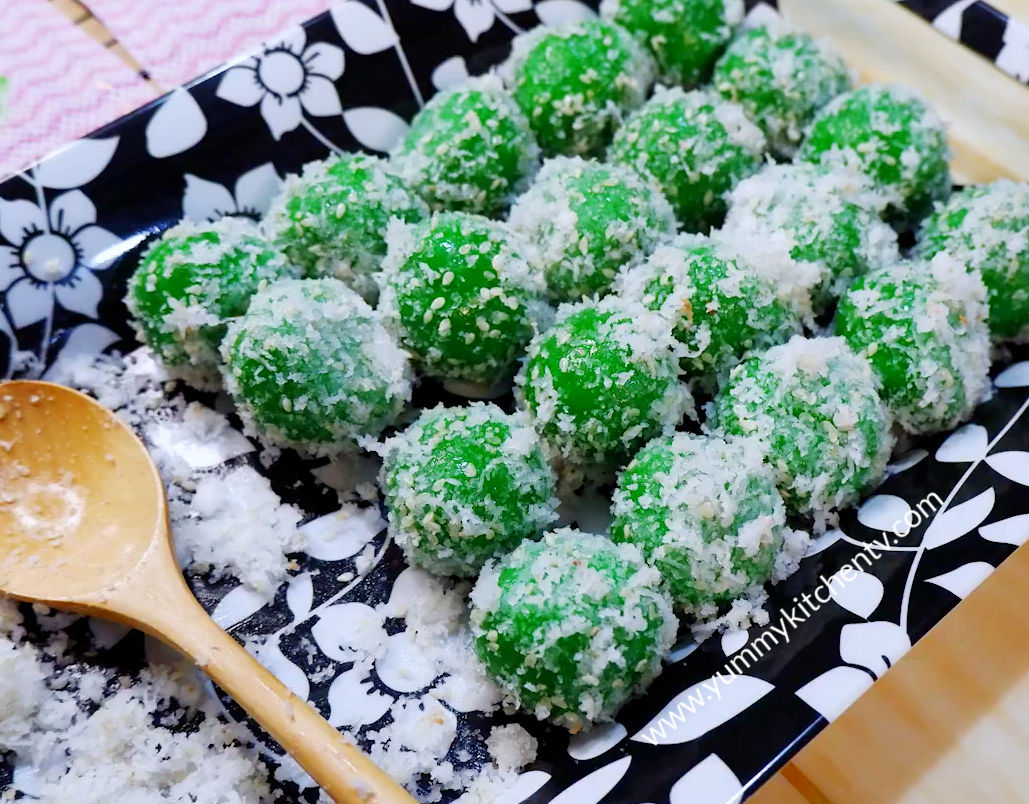 Tired of the same small flat white rice cake you always find at the table during New Year? Make your palitaw stand out by adding some colors and twist! The buko pandan palitaw ball is a new fun way of making the palitaw more appetizing and enjoyable to eat!

Palitaw is a small, flat, sweet rice cake which originated in Pangasinan. The word palitaw came from the Tagalog root word “litaw” which means “to float”. This sweet flat rice cake got its name from the way it is cooked. The sweet dough is boiled in water until they float. Sounds amazing, right? The traditional palitaw is made from rice which are soaked overnight and then grounded into a fine powder. This sticky rice will be transformed into the palitaw dough.

Palitaw can be eaten as an afternoon snack or a dessert after a light meal. What’s more fun with palitaw is that it is gluten-free, a best option for those who wanted to enjoy kakanin but has allergies to gluten.

Some people tried to make versions of palitaw with stuffed ingredients such as fruits or nuts or the sugar and sesame seeds integrated into the dough before boiling. I personally tried this but I guess, adding other ingredients to the dough can cause it to break apart while cooking. This is why I had the idea of this new and innovated palitaw recipe. In this buko pandan palitaw, liquid extract will be used to incorporate the buko pandan flavor to the dough. And instead of adding ingredients to the dough, I added another layer of flavor which will be in the form of a filling.

Does this excites you? Read this blog and make your version of buko pandan palitaw balls!

There will be three parts in making the buko pandan palitaw balls—the toppings, the fillings and the palitaw balls.

The toppings or coatings will be the first thing you’ll taste as you take a bite of this sweet snack. For our toppings, we will use the classic coconut-sesame mix for that nutty and creamy outer layer. To make the toppings, simply mix the toasted sesame seeds, coconut and sugar.

Before you make the palitaw balls, make sure that the fillings are ready. In this recipe, I will introduce you to two famous fillings surely you cannot resist. The first one will be a cheese filling which can be made by simply cutting your favorite cheese into small cubes. The second one is the buko jam. There are available buko jams from the grocery but it is always best to make it from scratch to have the freshest ingredients. For the buko jam, make the shredded coconut sweet by boiling it in a small amount of water with added sugar. Be careful not to overcook or else it will taste burnt. When the sauce is thick, then the jam is ready. It will be much thicker as it cools down.

And now, for the most important part, making the palitaw balls. With the extensive process of making the classic palitaw, the modern versions of palitaw uses store-bough glutinous flour which are more accessible and efficient to use. Start the palitaw by making the palitaw dough. Simply mix the glutinous rice flour with water until you form a pliable dough which is not too runny and not too dry. A dough too dry will result in a hard-to-chew rice cakes while too wet may be hard to shape. In case these happens, adjust the consistency by adding more flour or water. For the added twist, add the green food coloring and the pandan extract. I recommend you to wear gloves because this step will literally be a bit messy. You might end up having alien hands. #JustKidding

The next step would be shaping the dough. This will be easy since the dough has a clay-like consistency. Grab a small scooper to make uniform-sized balls. If the dough is sticking, wet your hands in between shaping. Do not forget to add the filling at the center. Using these measurements, I was able to made 20 palitaw balls.

When the balls are ready, then it’s time to make them “litaw”. Boil the balls until they start to float. Remove them from the pan and let them cool down a bit before rolling them to our sweet sesame-coconut toppings.

For the Buko Jam: