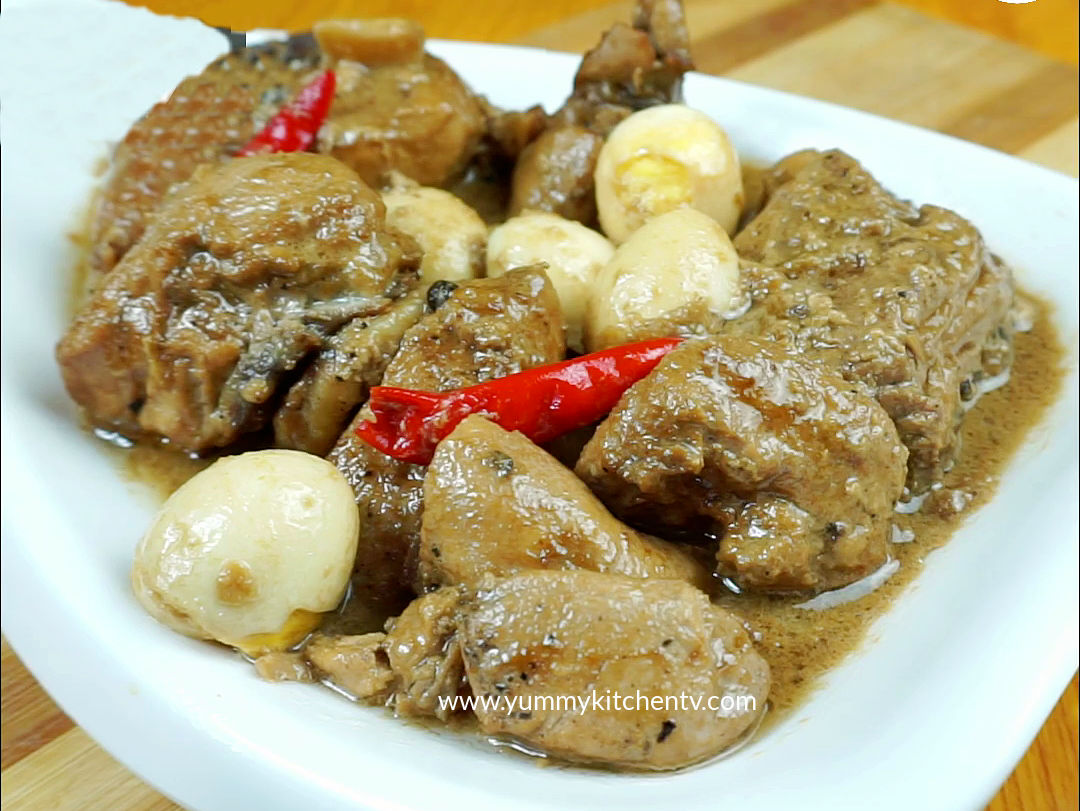 The word “inadobo” is actually a term use to describe meat or fish braised in a mixture of soy sauce and vinegar. A lot of protein sources may be used in adobo dishes which may include pork, fish and chicken. Added spices and ingredients varies from region to region. Chicken adobo became a hit when Filipinos started to gain consciousness on the calorie content of food and started using chicken with a lesser fat meat.

Adobong manok sa gata may be considered as the Bicolano’s way of cooking the Filipino chicken adobo. It is actually cooked similar to the adobo but with coconut cream and chilies. This version of adobo is great if you are craving some creamy dish but do not want it to be too milky. Adding gata will make our classic adobo just the right level of savoury mix.

My family is very in love with my version of the classic adobo. It is actually one of our comfort foods. With its classic Asian savoury taste, I am not surprised that it is one of the most requested dish for our daily family dinner. But meanwhile, my niece likes almost all of her ulam creamy—kaldereta into creamy kaldereta, kare-kare into creamy kare-kare and many more. Whenever I prepare some classic adobo, I always reserve some to make it a creamy one for my niece. Knowing that she also likes ginataan dishes, I used gata in making her favorite creamy adobo. I once tried using heavy cream instead of gata without telling my niece but she figured it out at once. She described that the creaminess of the gata is way fresher and has a better mouthfeel. She really likes the sauce once the coconut oil has been rendered already. Watching my niece happily eating her creamy adobo, my family asked me to cook a batch for us and they definitely liked it. Since then, adobong manok sa gata is added to our staples for family meals.

As mentioned, adobong manok sa gata is your classic adobo with a twist. If you want a quick guide on how to make this dish, continue reading the recipe below.

If you have tried cooking the classic adobo before, cooking some adobong manok sa gata will also share similar steps.

Adobo is a very flexible dish. There are no rules on which part of chicken you should use in making a savoury chicken adobo. You can actually use the whole chicken if you like! Marinate your chicken with a mixture of the classic adobo marinade. This will also be our sauce base for later. After marinating, sauté your aromatics and the marinated chicken. Add the sauce based and the spices. Add our special ingredient—the coconut milk. Let the adobo cook peacefully. When the coconut milk has rendered some fat, that’s when you know that the magic has been done. To further add texture to your adobo, add some boiled quail eggs. If not available, you can use boiled chicken eggs. When everything is set, then the adobong manok sa gata is done. Make sure to make a lot of hot steaming rice for this meal wiil be the real deal!