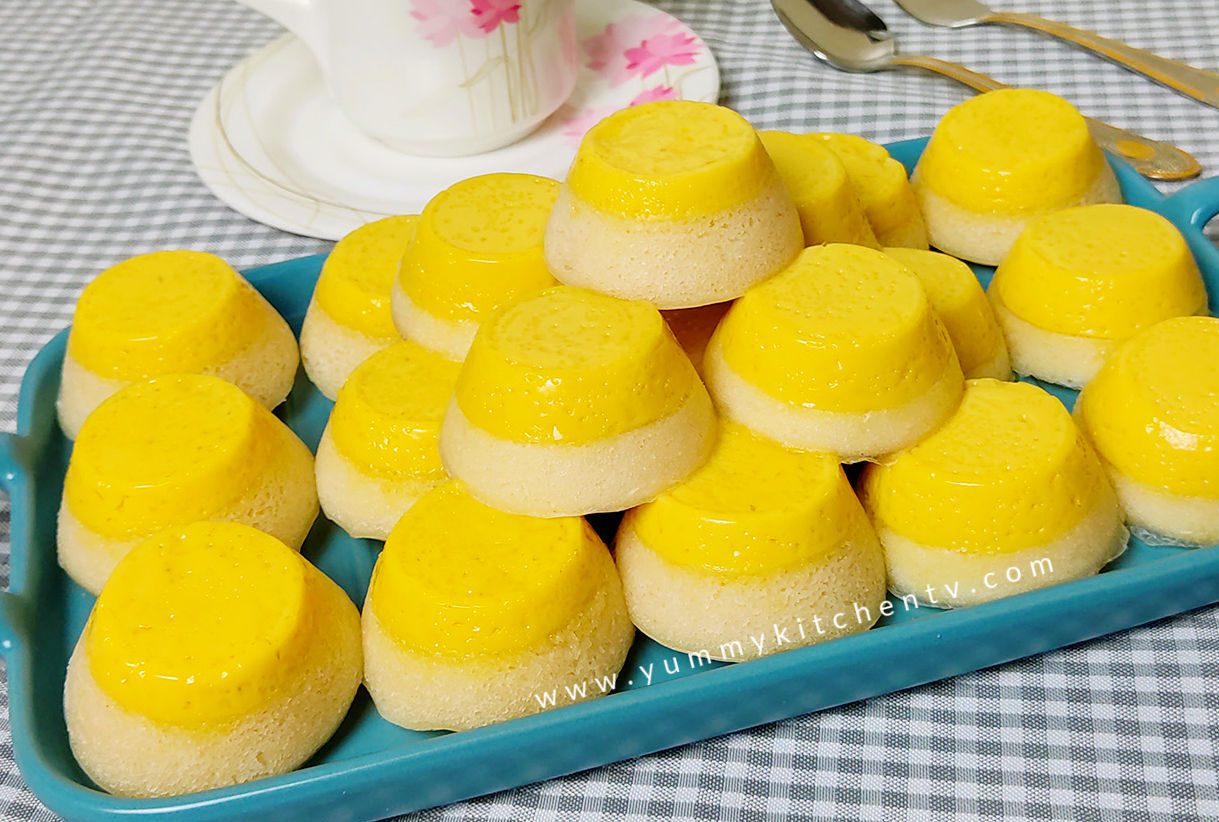 Puto flan is combination of puto and leche flan is made by steaming a half filled flan batter made with egg yolks, evaporated milk, condensed milk, vanilla extract and food colour in a puto mould and later adding a puto mixture made by all purpose flour, baking powder, salt, sugar, evaporated milk, egg white and melted butter on top of this flan. With this puto flan recipe, you can taste the softness and creaminess in one bite! This is best served together with your afternoon tea or coffee.

WHAT IS A PUTO?

Puto is one of the Pinoy’s classic kakanin. What makes this delicacy unique and famous is its pure white color and the unique texture brought about by the rice flour. Puto is usually eaten together with dinuguan or alongside spaghetti and pancit bihon during fiestas and birthday celebrations. More and more upgrades are made with the puto like puto pao, puto cheese or colored puto but the classic remains the best one.

WHAT IS A LECHE FLAN?

Just like the puto, leche flan is a classic Pinoy dessert. In a handaan, you’ll see this next to the jelly desserts. Leche flan is a steamed dessert made with eggs and milk with its famous caramel sauce on top. It is sweet, creamy and super soft. This dessert is called creme caramel in some areas in the world.

Just like you, I am a fan of both puto and leche flan. Every celebration I’m invited to, both of them are always present and always competes on which would be my last bite. With this dilemma, I usually look for someone to share and take the half of my puto and leche flan.

Since I will be celebrating my very own birthday soon, I developed a dessert to prevent the dessert dilemma I had in the past. Most of them got surprised because they never thought that I can combine those two! It was a blockbuster dish when I first had it. This version of puto flan has no caramel sauce but I usually make them separately and just pour them over before serving.

Now, I make puto flan even without an occassion. As kakanin lovers, my family really enjoys this during our calm afternoons together with some sweet tea or coffee.

If you also wanna try to make some puto flan at home, read and follow the quick steps below.

HOW TO COOK PUTO FLAN

Making the puto flan is much simpler than making them separately. Although it is true that they need to be cooked twice, the actual flan and puto mixture making is super simple and straightforward.

Lets start by making the flan mixture since it is going to be at the bottom of the molder (the one at the top when unmolded). Simply make the flan mixture by combining all of the flan ingredients listed below. In this recipe, I added some drops of yellow food color just to brighten its color more. Just remember to strain the mixture for a few times. Think of it as like combing your hair. Straining the flan mixture makes it smoother and richer for later.

Our first batch of cooking is about to happen. Arrange the molders in the steamer and allow them to cook. Cover the top with a cloth to prevent the water from dripping on the molders. This flan cooks faster since they are just medium in size.

Using this recipe, I was able to make 24 medium sized puto flans. Enjoy this with your favorite tea or coffee. Yum!