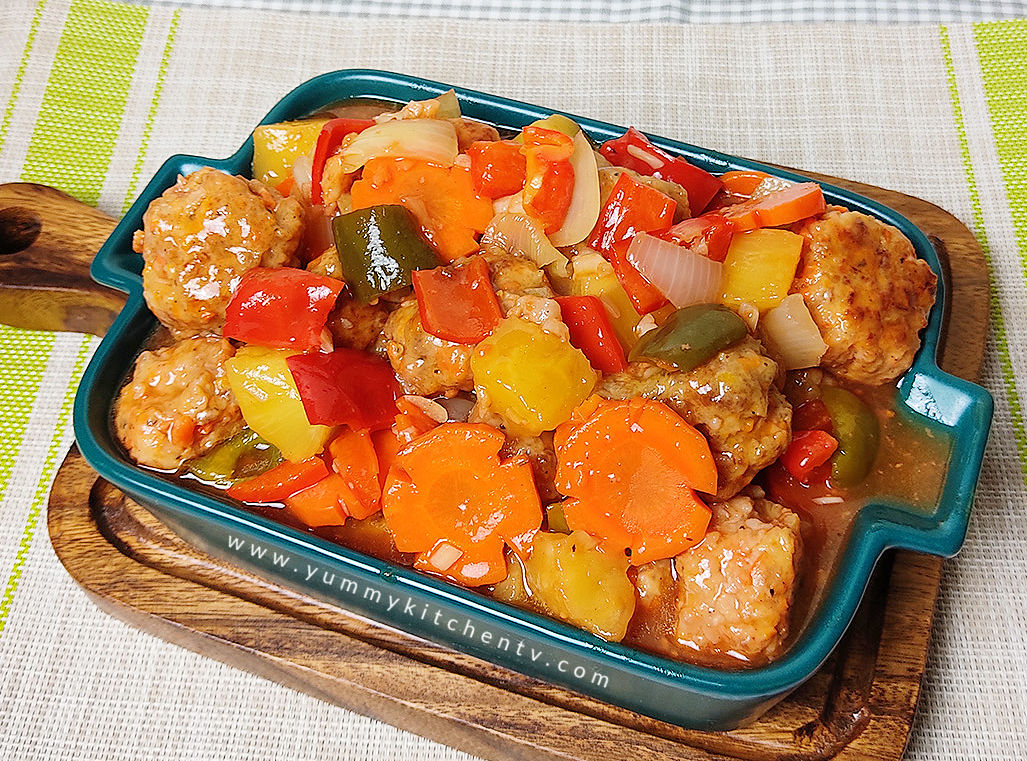 Sweet and Sour Meatballs is made by frying a meat ball mix made with ground pork, onion, carrot, basil, egg, corn starch, flour, salt and pepper and adding these fried balls to a sweat and sour sauce made by carrot, green and red bell pepper, pineapple juice and chunks, sugar, vinegar and ketchup. Sweet and Sour Meatballs is a scrumptious dish popular in Philippines and South east Asia. If you haven’t thought of a snack for later, try these bite sized pieces of meaty pork smothered in sweet and sour pineapple sauce! Really hearty and super mouth-watering! I bet you won’t stop on the meatballs

Sweet and sour dishes is another type of dishes which we inherit from the Chinese. This dish is usually served during the Chinese New Year and other celebrations. One significant feature of this dish is its colorful presentation brought about by the different colors from the orange sauce, the  onions, red and green bell peppers and yellow pineapples.

The following weekends, I immediately made a large batch of meatballs since a lot of kids will be visiting our home. I’ve read it somewhere that all kids love meatballs. Instead of serving them some sweet dessert, I’ll be giving them a much fulfilling snack.

HOW TO MAKE SWEET AND SOUR MEATBALLS

Making some sweet and sour meatballs. We are going to make the meatballs first, then the sauce. The only hard part in this recipe is you trying to resist eating the meatballs while making the sauce (HAHA).

For the first part of this recipe, prepare your hands to get a little messy. To make the meatball mixture, start by chopping or mincing the rest of the ingredients and then combine them together as one. Just make sure the pork will still be the dominating ingredient in the mixture.

Once ready, make them into a ball and then simply fry (or deep fry). Just remember not to make your meatballs too big as it might not cook through the core. One to two scoops may do.

When the meatballs are ready, the only thing left is the sauce. Start by sauteing the aromatic base, and then sauteing the rest of the veggies. Add the slurry and the rest of the seasoning to make the sweet and sour sauce. You may add more pineapple juice if you feel to. Always to a taste test to adjust the taste. You may gently crush the pineapple for a more fruity sour taste.

Add the meatballs back to the pan to complete the dish. Coat them well with the sauce. I sometimes papak this dish as a snack since the bite-size really caught me. Still best served on top of hot steaming rice! Yum!