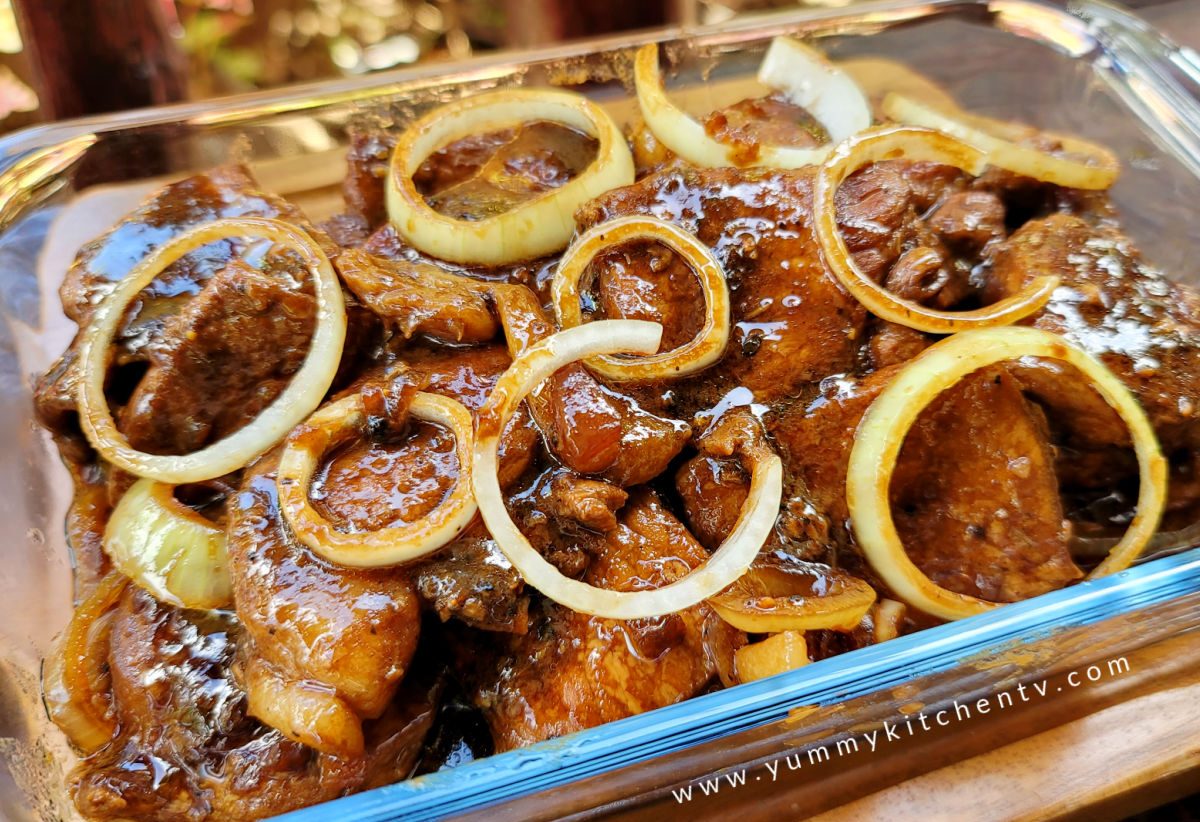 Pork Steak is made by marinating and frying pork chops with soy sauce, oyster sauce and calamansi juice and seasoning with pepper to taste. It is again fried with chopped onion to give a appetising aroma. it is topped with a lot of sweet and crunchy onion rings. This pork steak recipe will show you how to make this scrumptious dish easy and simple steps.

Prices of meat are continuously rising, especially the beef. Beef is usually the one to be used in a bistek dish, which is one of my fave ulams as an onion lover. Since pork is a cheaper beef alternative, pork steak is a much economical dish if you really want some bistek!

I have always loved pork steak and bistek ever since I was a child. Whenever I request this dish to my mom, I will always say “the ulam with onions”. Unlike other kids, I am a bit different when it comes to onions. I love them! Whether they are the violet ones, or the white ones, and even the yellow ones. I love them all! White onions have a special place in my heart since they are very great for caramelized onions, the dish which made me fall in love with onions.

Whenever pork steak is served at the house, I always call for dibs with the onions. I just left just a few just not the be the one who kidnapped all the onions (HAHA). I really love plating my pork steak in my plate like, the pork and the onion rings are separated because they are my “veggies”.

It is not everyday that I cook pork steak but when I cook one, I make sure that there’s a lot of onions! If you will notice, I used 3 onions in this recipe. If you wanna know how to make some pork steak at home, read and follow the quick and simple steps below. Happy cooking!

HOW TO MAKE PORK STEAK

Pork steak is one of the easiest marinated pork recipes. If you want a quick and simple dinner recipe, this one is perfect for you!

Start by preparing your pork. You can actually use any part of the pork but the most recommended one is the kasim part. This part is located at the shoulder area of the pig, which gives it a nice slab of lean meat and a small part of fat. Unlike other marinades, the basic marinade for a pork steak recipe only includes soy sauce, oyster sauce and calamansi. This marinade will also be the base for the sauce for later.

This dish is characterized with having a lot of onion rings. Grab the largest white onions and cut them into rings, To do this, cut the onion horizontally instead of vertically. Separate the onion rings from one another.

Life hack: If there is a veggie which can make us cry, it is definitely the onions. Some people believe that white onions make us cry less, but.. it still makes me cry hard! Since the pork steak recipe includes a lot of onion cutting, this hack sill be super useful for you. When I had my OJT at a restaurant, the chef shared a hack when cutting onions: Keep a container of salt open nearby. It is believed that the salt absorb the tearful gases which prevents them in going into our eyes. I haven’t seen the science behind this but the hack was real! The chef told me he’d been doing these for years already.

Going back, start searing the pork once they are nicely marinated. Searing adds flavor to the dish and keeps the juices inside the pork intact. Remove the pork from the pan and saute some of the onion rings you made. Saute them together with the pork and then add the marinade to serve as the sauce. I like my pork steak a little sweet so I added some sugar. But that is optional.

The last thing to do is to simmer them and wait for the right time to add the rest of the onion rings. We still want some of the rings to be cooked but crunchy so we added some of them last. When the pork and the onions come together, then the dish is ready!

I really love pork steak with a lot of hot steaming rice. Yum!