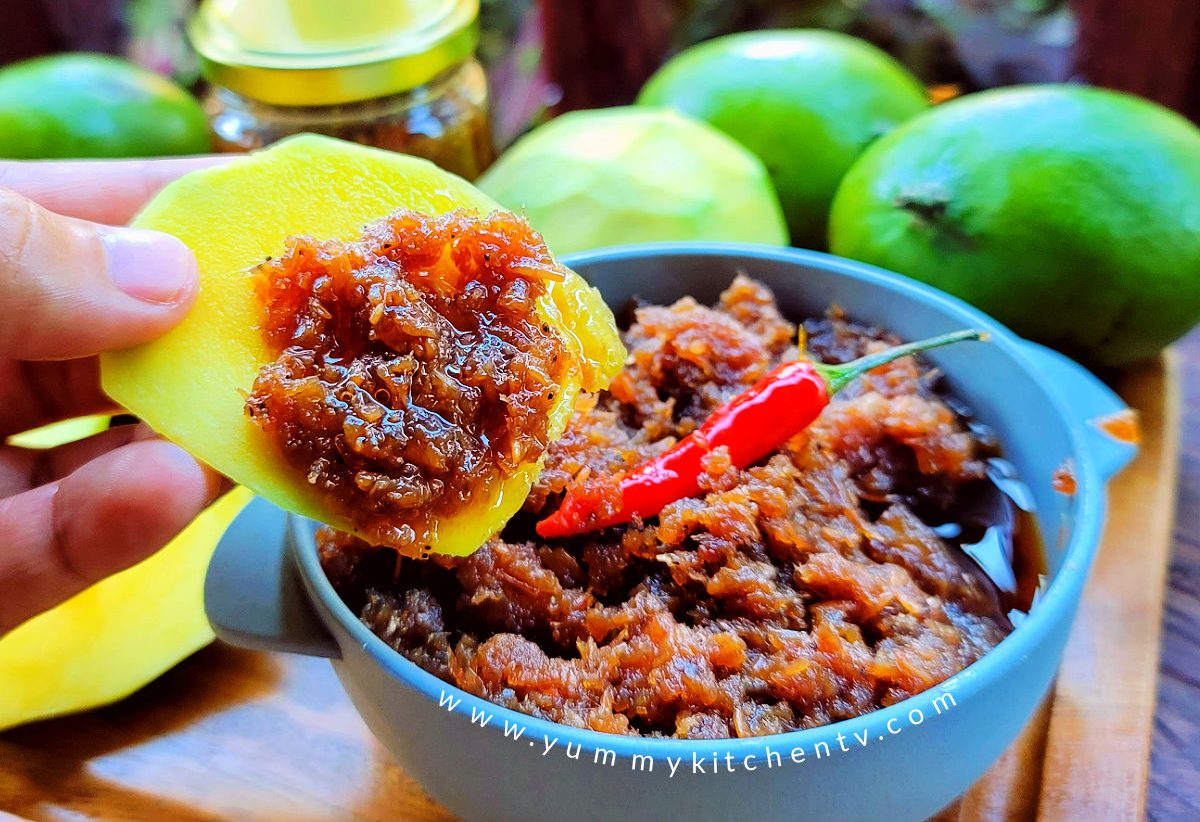 Ginisang Bagoong (Sautéed Shrimp Paste) is a sweet and salty Filipino traditional condiment, made with shrimp paste, pork fat fried minced onion, garlic, minced tomatoes with seasoning like pepper, vinegar. Ginisang Bagoong or Sauteed Shrimp Paste is a very tasty and easy recipe made of a few ingredients such as shrimp paste, pork fat, and seasonings.

From the start until I finished writing this blog, I was continuously drooling. I bet you’ll drool too everytime you see some green mangoes with alamang on Facebook. The combination of the sour unripe mangoes with the sweet and salty ginisang alamang was just so perfect!  Aside from being the best dip for green mangoes, sauteed alamang is also used as a condiment to kare-kare and a main ingredient for pinakbet and binagooongan.

As you see, fresh alamang is pink in color. I haven’t really try to eat them fresh but I bet they taste really salty and ocean-y. The sauteed alamang has been added with different flavors and aromatics. Everything that is ginisa with the basic aromatics are automatically upgraded on the next level. Special  alamangs has pork too! The taste is also balanced using sugar. Sauteed alamang is way way better to use than fresh alamang.

There are still many ways on how you can incorporate alamang into your daily dishes. And whats better is that you can make a large batch of alamang for a kumikitang kabuhayan! Especially during the mango season, alamang is super worth to make and sell! If you wanna know how to make some ginisang alamang, read and follow the recipe below.

HOW TO COOK GINISANG ALAMANG

In this recipe, I added some pork but this is totally optional. This is just to add some meaty flavor to the dish. I do not add soy sauce  or salt since the alamang is already salty. A few drops of liquid seasoning will help unleash the umami flavor of this dish. I used a cup of sugar for a kilo of fresh alamang. Do a taste test if you want to add more.

The cooking process might take around 30 – 40 minutes. You’ll notice that the liquids and the oil will be almost dried up by the end of the cooking. If you are making a large batch for selling, make sure to let them cool completely before transferring them into containers. The ginisang alamang is ideally to be consumed within 2 weeks.

Instead of being pink, the sauteed alamang is now gorgeous brown in color which makes me drool every time. I usually eat my ginisang alamang together with unripe mangoes. You can also add it in some recipes like binagoongan and pinakbet.