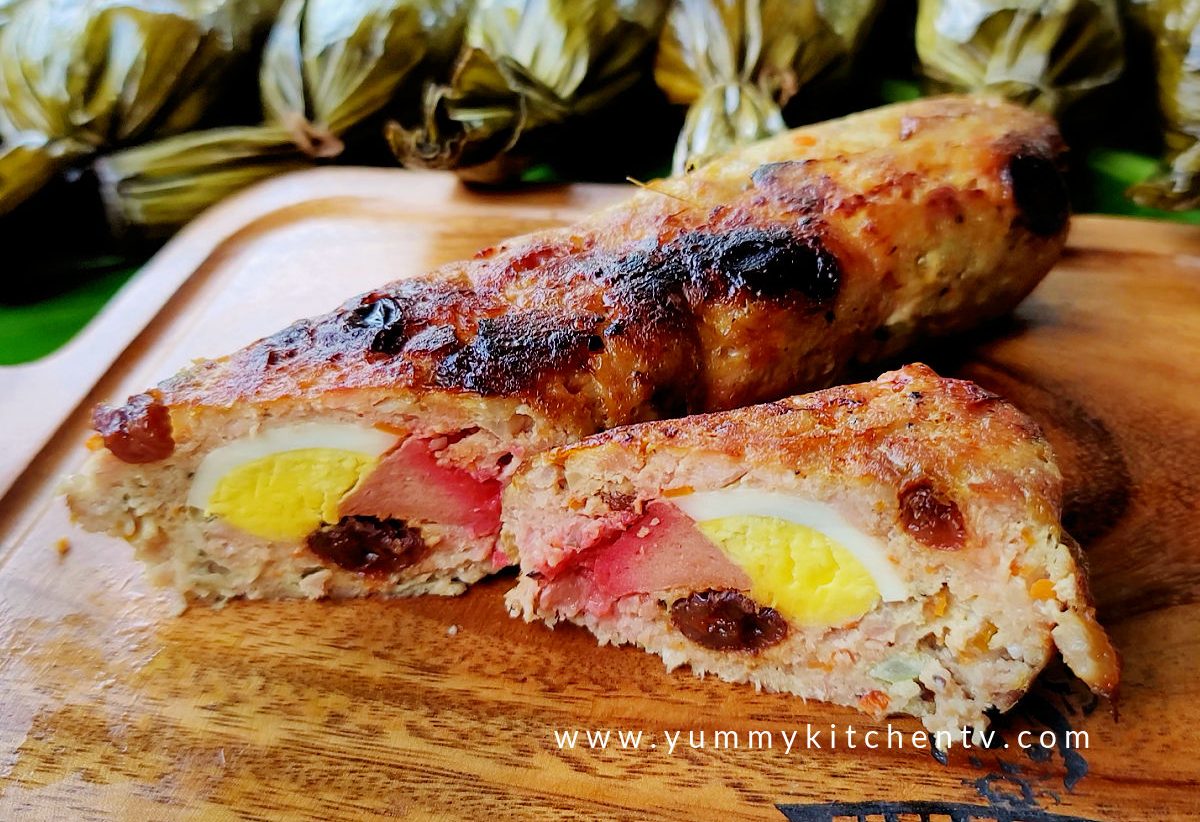 Embutido is a popular Filipino steamed meat dish, made by steaming a mixture made with ground pork, eggs, carrot, onion, garlic, evaporated milk, hot dog, red bell pepper, breadcrumbs, pickle relish, grated cheese, raisins, eggs, butter, salt and pepper, in banana leaves. It can be served as it is or can be fried again in oil to make it more crispy. This embutido recipe will show you how to cook embutido in easy and simple way.

Embutido is known as the Pinoy version of meatloaf. The main ingredients used are ground meat and vegetebles and spices particularly carrots, onions, sweet pickles, raisins. They usually come with a surpise hotdogs and egg slices in the middle.

As a native of Batangas, I am proud that our version of embutido is widely known in the country. We sometimes call this dish “morcon”. In our province, embutido is usually cooked for big celebrations. If you smell embutido from the neighbor, it is more likely that a celebration will be held in a few days. Ika nga nila ay #AmoyFiestaNa.

What makes our embutido unique is that it is wrapped in wilted banana leaves, steamed and then fried. I invited one of my non-Batangueno friend to our house one time and she was shocked that I fried the embutido. She told me that in her place, they eat it fresh from the steamer. She also noticed that the embutido is wrapped in banana leaves instead of aluminum foil.

That’s what make our embutido more flavorful (and the best!). The banana leaves add some flavor and aroma to the embutido. The best thing about this dish is that you can store them after steaming and then just fry them anytime you want!

HOW TO PREPARE THE BANANA LEAVES

Preparing banana leaves will be quick an easy once you have the leaves ready. Cut the leaves from the stalk. Cut them into big squares, around the length of a ruler. Wash and clean them from any dirt and then dry using paper towels.

Turn your flame on using low heat. Quickly pass the banana leaves over the flame until it softens and wilts a little. Be careful not to burn the leaves!

For a large batch of embutido, you will surely need a lot of banana leaves. Make sure to prepare a bunch so you’ll have extras.

Before you place the embutido mixture, make sure to brush them with margarine or butter to prevent them from sticking. This will also adds flavor to the embutido crust.

HOW TO MAKE EMBUTIDONG BATANGAS

I’m sure you’re all familiar with meat loaf. So let’s make it #homemade the #Batangueno way!

The first thing to do is to make the embutido mixture. Simply combine all the ingredients listed below and mix well. You can add and remove some of the ingredients if you like. (I understand that not everyone is a raisin fan)

After mixing, you should achieve a nice sticky mixture. If you miscalculated and it became runny, add more of the ground meat and breadcrumbs.

Now is the right time to make a taste test. Of course you wouldn’t eat it raw! Fry a little scoop and adjust the taste of the meat mix. Adjust the taste accordingly.

Gather your wilted banana leaves and we start rolling!

Rolling and wrapping the embutido is quite similar to making a lumpia. The difference is that you don’t fold the sides. Continue rolling and then seal the sides using a tie. I used abaka tie for mine. Don’t forget to add some hotdogs and egg slices in the middle. It’s a good surprise when you finally cut your embutido!

Prepare to steam your embutido. Make sure not to overcrowd the steamer so each of them will cook evenly. The steaming time will take around an hour for the meat to cook fully.

After steaming, you can serve the the embutido right away or fry them for some crispy crust. Here in Batangas, we usually eat our embutido fried. But unlike how you fry meat loafs, the embutido is fried while still wrapped on banana leaves. Make sure to have enough oil in your pan to submerge half of the embotido roll.

Fried embutidong Batangas is crispy on the outside while soft and flavorful on the inside. I like it best with my favorite mayonnaise and some hot steaming rice. Enjoy!