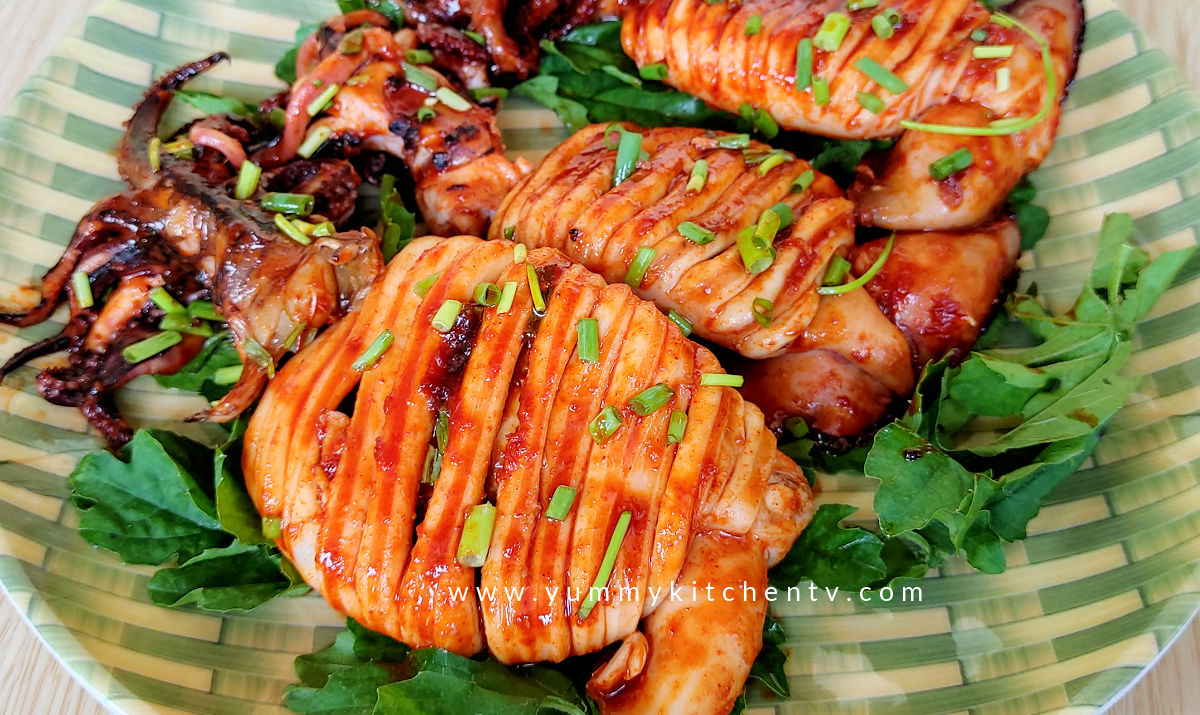 Pan-grilled squid is made by pan grilling fresh squid after marinating it with a marinade made with ginger, garlic, gochujang sauce, soy sauce, honey, sesame oil and garmished it with spring onions. This korean spicy pan grilled squid (grilled pusit) will surely tickle your taste buds, just how like your favorite kdrama makes you kilig. This quick and lovely seafood recipe is a hassle free one, with no special equipment needed, just you and your pan. Try and make some today!

WHAT IS GOCHUJANG SAUCE?

Have you ever tried walking on a Korean market (in the PH)? Almost all of them is red in color. Not that they are violent or a fan of blood way, but it’s really because of the gochujang. When you say one is a Korean dish, then there is a 90% chance that it uses gochujang sauce.

Gochujang is the special red sauce only known in Korea. What made it super special is that it is made with Korean red chili peppers and is processed together with fermented soybeans, rice and salt. Some people makes their own gochujang sauce at home, but oly the Korean variant of red chili peppers can give the unique taste of this sauce. If you use the regular chili, it won’t taste the same.

In the Pinoy trends, you can often see the gochujang sauce served for free in unli samgyupsal restaurants. If you’re a fan of this sauce, or simply would like to taste it, you must really try this recipe.

Since I became hooked with kdrama, I also become hooked with Korean food. I have been trying different korean dishes like kimchi, fish cakes, tteobokki and many more. One defining item that can instantly turn a dish korean style is the gochujang sauce.

I had been seeing this red sauce in my kdramas but a bit afraid to buy a whole tub since, as my friends say, the gochujang has a unique spicy taste. I’m a spice lover but they gave a disclaimer that gochujang really is a special one. I first tried this sauce in the unli samgyupsal and instantly fell in love with it. The first dish I used the gochujang sauce is of course, fried boneless chicken. Now, I am experimenting this sauce to other dishes.

Luckily, I had some large squids in the fridge, ready to be cooked and consumed. A life changing way to cook the squid is to sear them quickly, and then baste them using the sauce of your likeness. For this recipe, we will be using a gochujang sauce with blended flavors from the ginger, garlic, soy sauce and honey.

What I really love about this dish aside from it made my squid korean, is that it is very instagrammable. When you put this at the center of your table, it will immediately look like there’s going to be a celebration. Actually, if you do this with very large squids, you can serve this during fiesta’s and birthdays instead of the usual lechon.

If you wanna know how to make some spicy pan grilled squid, then read and follow the easy steps below. Have fun!

Making some spicy pan grilled squid is super easy and amazing. Get your pan prepared and your cooking skills ready!

The most challenging part of this recipe for me is the cleaning part of the squid, especially if you’re not familiar with the parts of the squid. So if you’re gonna do this the first time, either ask someone to help you or watch some youtube videos first.

For this recipe, I really recommend getting large squids instead of the cute ones. Start with removing everything that’s inside of the squid. Almost everything you can see here is black. They are not dirty, they are just black because of the natural black squid ink. There’s like a thin long plastic in the middle of the body, called the quill, pull it gently. It’s not real plastic, it is one of the cartilages.

The preparation for the head is quite challenging since you need to have a good eye on looking for the squid’s eye (pun intended!). As sad as it sounds, you need to pop and remove the eyes. When the squids are all prepared, cut them some slits.

For the basting sauce, simply combine all the sauce ingredients. You can add extra gochujang sauce to make it more Korean style.

The next steps would involve grilling the squids in the pan and then basting them using the sauce. Just remember not to cook for too long as the squids might get too dry and chewy.

I really love serving this dish to celebrations since it makes the table extra sosyalera. You can eat this as an appetizer, pulutan and most especially with some hot steaming rice. Yum!