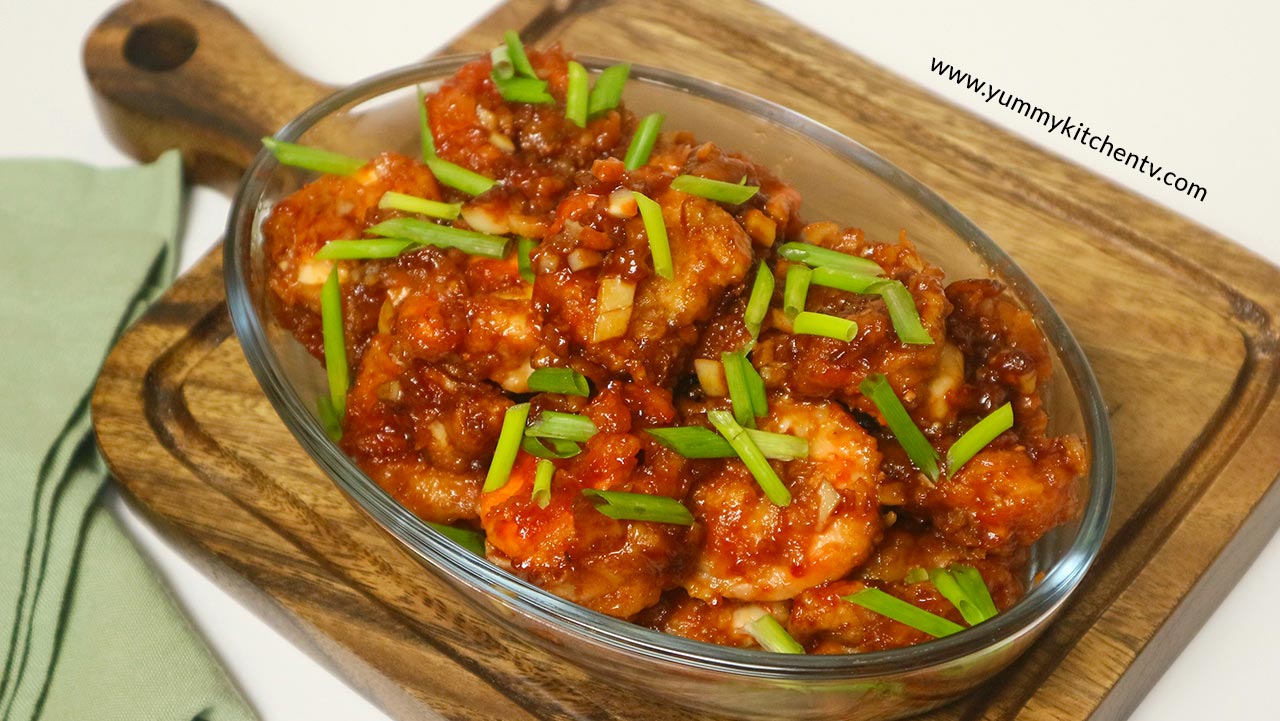 Buffalo Shrimp is made by frying shrimp after marinating it with salt, pepper and calamansi juice and dredging it in a mix of all pupose flour, cornstarch, saltm pepper, paprika, garlic powder. This fried shrimp is further sautees in sauce made with butter, garlic, ketchup, brown sugar and soy sauce. Enjoy this Buffalo Shrimp appetizer slash game or movie night snack at the comfort of your home.

What is Buffalo Sauce?

Buffalo sauce is a spicy seasoned sticky sauce made of hot sauce, butter, white vinegar, Worcestershire sauce, cayenne and garlic. This roasty almost smokey strong rich flavor is usually partnered with chicken wings. Buffalo sauce with chicken wings of Buffalo wings got its name from Buffalo, New York in a family owned restaurant called Anchor Bar where this snack was created. This bar owned by Franck and Teressa Bellissimo in 1939 is known as “the Home of the original Chicken Wing” the invention of the Chicken wings itself all came about due to a mishap.

The stories goes that in around 1964, the Bellissimos received a large delivery of chicken wings instead of the necks, backs and other parts that they were awaiting. Instead of wasting them, Teressa decided to try and find a way to use the excess chicken wings. She ended up broiling the wings and smothering them with the spicy sauce she made from scratch. She then served the snack in a tray with a side of blue cheese dressing and celery sticks. It was their son Dominic who suggested presenting the idea to their mostly Catholic customers on a busy Friday evening. In that time some Catholics traditionally only ate fish and vegetables on Fridays, so the idea of presenting the dish out for many to try seemed like a great idea. It became an instant hit. Soon the hot chicken wings became a part or the menu and were generally associated with the Anchor Bar. An after it became a popular food trend which was then shared and sold in many restaurants and fast food chains all over the United States. One of the biggest reason on how the Buffalo or wings became popular is from the Super Bowl where the Buffalo Football team made it into during 1990-1993, the media outlets covering the team also covered local dishes where the spicy chicken wings already called Buffalo Wings at that time was featured. After that the phenomena where football fans or sports fans alike eat this dish on game nights or when watching football. The popularity of the trend didn’t stop there. As usually new food combinations, reinventions and many more dishes that just catches someone’s eye or looks aesthetically pleasing, especially in social media the fad begins to boom more and reaches all over the world. It soon became a recipe tried by other food chains outside the United States having their own twist in it to suit their own flavor profile as well as use ingredients that are more readily available. You’ll be sure to find chicken wings in many bars, parties, potlucks, and restaurants today.

Similar to the Buffalo wings, this version is instead made of shrimp coated with ingredients easily found at home like eggs as binders, salt and pepper as a simple seasoning, flour, cornstarch, baking powder, for crispiness, calamansi juice just to add that fresh taste on the shrimp, paprika garlic powder for extra flavor, and for the simplified buffalo sauce, just mix together butter, garlic, ketchup, brown sugar, and soy sauce till it thickens. Ready to be tossed around with the shrimp t give it some color and a lot more flavor.

This is so quick and easy to prepare, the perfect combination off sweet and spicy that each bite just takes you to heaven.

The Perfect finger food for parties and game nights

A nice easy way to replace chicken wings when you love the sauce but cant eat chicken or have already had too much chicken over the week. It only takes a few minutes to make this game day or pretty appetizer dish. This recipe isn’t overly complicated to make. You can dress it down of dress it up depending on how you want to take this recipe. Use it as a base and make it your own.