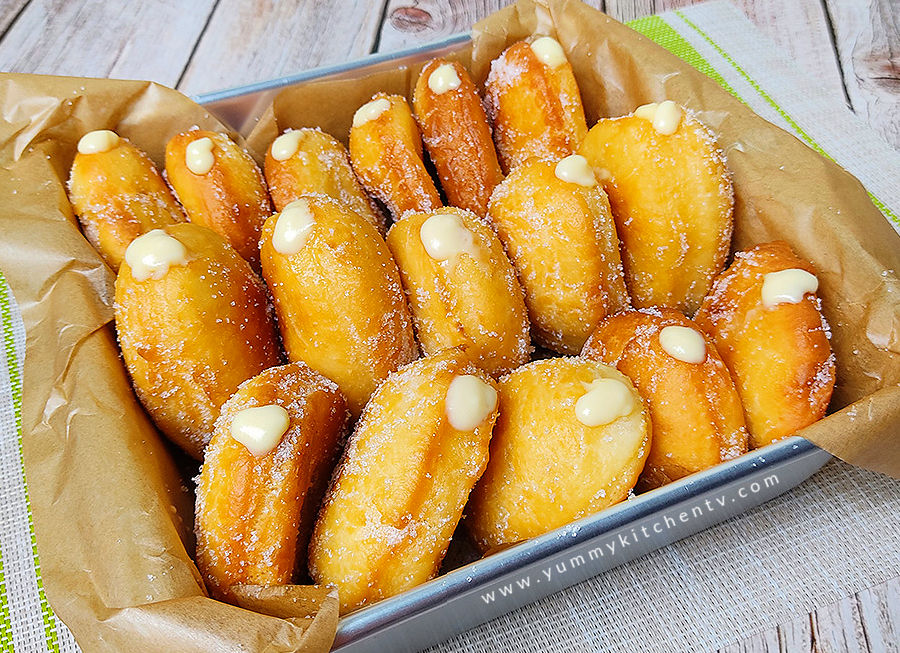 WHAT IS A CUSTARD?

A custard is a sweet sauce made by combining milk and eggyolks. It is a bit similar to the yema in the Philippines, only that a custard has a milder flavor. The custard cream will be featured in this article as a filling for our favorite Pinoy donut. Other ways you can incorporate custard cream into your favorite desserts are through caramel custards flan, creme brulee, custard cake and many more.

A bakery is not a bakery if it does not have custard cream donuts. If you pass by one, look for small bread coated with sugar and some excess filling on the side (usually tells the flavor of the filling). Custard cream donuts is one of my favorite pastries ever since. This is our usual snack after we play patintero and piko at the nearby playground. We have this with some ice cold sago’t gulaman also from the bakery.

As a person who’s mantra is “Save the best for last”, I eat my custard cream donut in a unique way. I first eat edges and eat the center with the most filling for my final bite. I really love the challenge on not letting the filling fall out!

Custard cream donuts has been the crowd’s favorite donuts for decades. Even my nieces and nephews are also in love with them! I actually made a large batch of donuts because they will be coming over for a visit. When I have time, I made a really large batch of donuts and sell them to kids in our area. That’s a good way to have income too!

HOW TO COOK CUSTARD CREAM DONUTS

Making custard cream donuts is very much easier than you think. With its ease of preparation, you can actually make a large batch for your own or sell it for a good price.

Lets start with the custard cream. If you already tasted bavarian donuts, a cream filling similar to those is the one we want to achieve. Simply combine the cream filling ingredients and then heat the mixture until you achieve the right consistency. Do a taste test and adjust the sweetness using sugar or condensed milk.

Now, let’s go to making the bread. The following steps are super easy especially if you have tried any pastry recipes or fried donuts in the past. Combine the wet and dry ingredients until you form a dough. The only unique step in this recipe is adding the oil after the dough is created. Prepare your hands to be greasy.

Fry the donuts until they fully float in the oil. They are done once both sides are brown (be careful not to overcook). Roll the donuts in sugar after removing them from the pan so the sugar will stick to the oil left in the donuts.

The last step would be filling them up with the custard cream. Simply poke the side of the donuts to make a whole in the middle to make a way for the cream. Aside from custard filling, you can also use this recipe to make some strawberry and chocolate filled donuts!