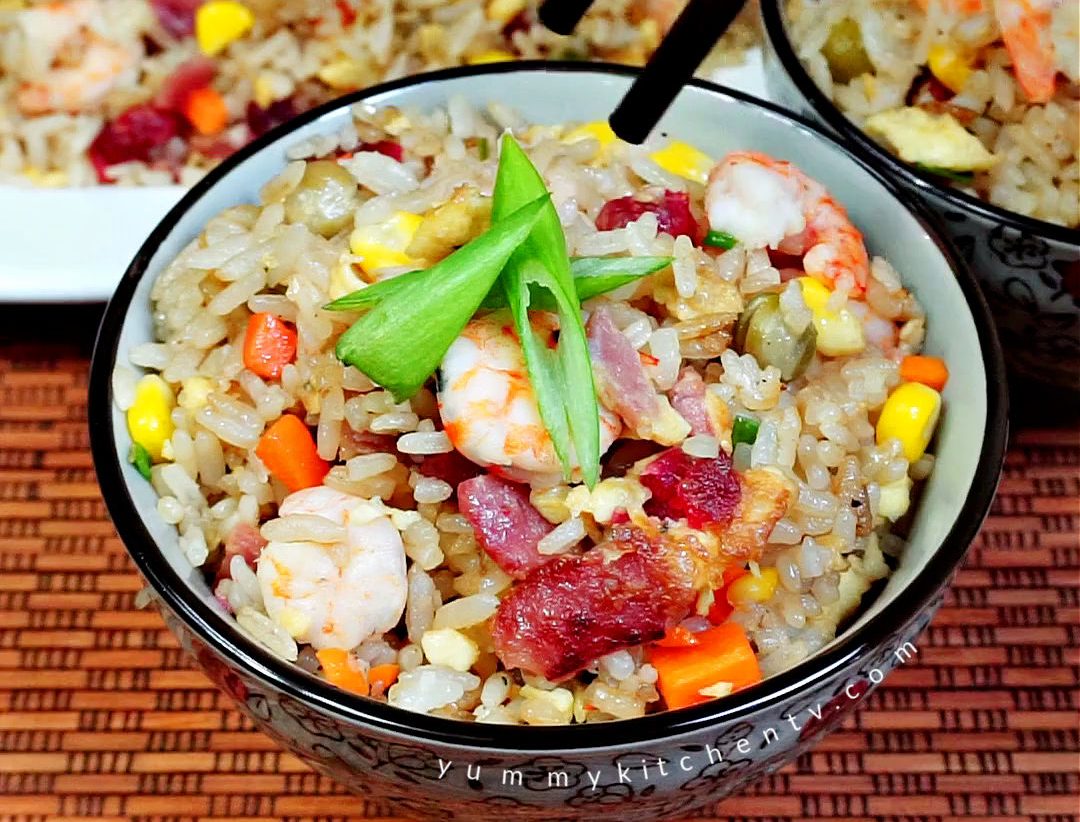 Planning for a Chinese dinner? Try this Yang Chow fried rice for a full on Chinese experience! This fried rice is based from the Chinese cuisine from Yangzhou China. It is an all-in-one fried rice mixed with a lot of flavorful and fancy ingredients like chorizo de bilbao, ham, shrimps, eggs and many more.

This fried rice is commonly very expensive when you buy it in restaurants. But actually, yang chow fried rice is just like your regular fried rice but make it 1 million times more bonggalicious. If you have a fancy budget for rice and would like to have an unforgettable eating experience, bring the Chinese cuisine at home and try this one today!

One distinguishing ingredient of the yang chow fried rice is the shrimp. First ingredient and its already fancy, right? Grab a large wok (use a wok or else Uncle Roger would be really furious) and sauté your shrimps. Some people recommends using sesame oil in this dish. Set the shrimps aside and we’ll add it back later. Your oil is now infused with shrimp flavor. Fuiyohhh! Saute some aromatics in the same wok. Add your chorizo de bilbao and ham and then saute. Another fancy ingredients, right? Fuiyohhh! You can use Vigan longganisa if you cannot really find a chorizo de bilbao. But traditionally, Chinese pork barbecue is used in yang chow fried rice. One thing best when making a fried rice is you do it using one pan only. When the chorizo and ham are almost cooked, make a well at the center of the wok. We are going to cook the eggs while it being surrounded by the other ingredients. But be sure to stir in a circular motion so the eggs will be cooked before you mix it with the rest of the ingredients. Or else, it will look like an ugly omelette. Haaaaiiya!

Make another well as the very important ingredient in this dish will be added—the day-old rice. Many are asking why use day-old rice when you can actually use freshly-cooked rice. The real reason is the starch and the stickiness. It is recommended to use non-glutinous rice in you are going to cook any type of fried rice. The rice should be fluffy so that other ingredients can incorporate easily. Rice loses its stickiness as it cools down and left for some time. This is why day-old rice is best used in fried rice. Add the rice and mix it well with the other ingredients. After the rice, add the carrots, green peas and corn. These are added not too early to provide a bit of crunch for later. Add the oyster sauce and the soy sauce for more umami goodness. Don’t forget to season with salt and pepper. The last things to add are the chopped spring onions and shrimps. You can also use the shrimps as toppings. Transfer the yang chow fried rice in a big serving plate. This fried rice is so flavorful that you can eat it as it is. But of course, you can partner it with any ulam you have at home. Some recommended topics would be siomai and shanghai. #VeryChinese Enjoy your yang chow fried rice how you like!