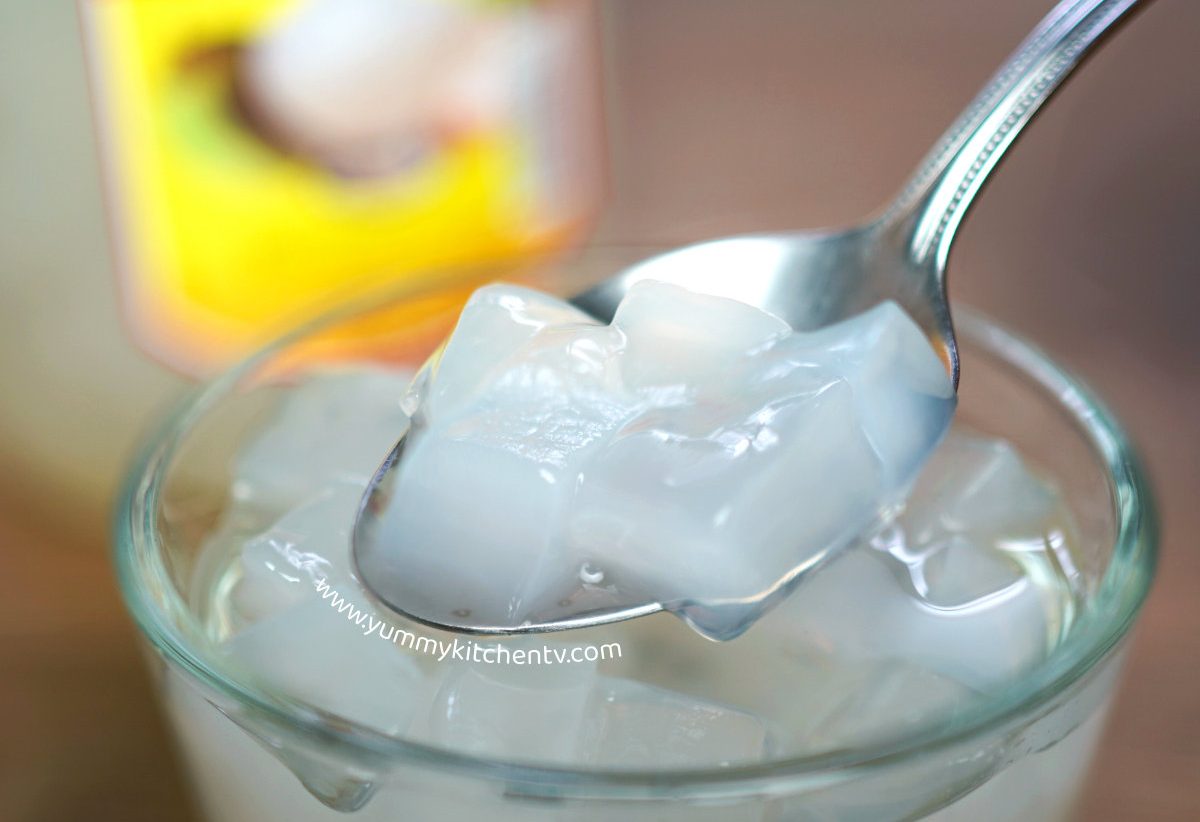 Nata de Coco or coconut gel, is a Filipino delicacy that looks like is a white translucent or opaque chewy jelly made by fermenting coconut water and a bacteria called acetobacter xylinum. This bacteria which helps form the coconut water into a gel like substance, making it firm but still chewy. After it’s formed it turns into a probiotic with great fiber content which many people love to add into their diet. This delicate looking jelly might just look like a sweet treat, but it’s actually healthier than you think !

Nata de Coco in english is called ‘coconut gel’, or in Spanish ‘Sebainatare’, translated to ‘Natare’ in Latin meaning ‘floating’. This unique Filipino delicacy was created and produced in the Philippines at around 1954, production later grew in the mid 1970’s. Invented by Teódula Kalaw África, as an attempt to utilize leftover coconut water or coconut waste. Also as an alternative to ‘nata de piña’ made from pineapples. Preserving it into a jelly-like substance. Produced in the Philippines and introduced around the world. Gaining popularity in Japan in the 1990’s. Nowadays, you can find nata de coco in its original form added in on the go juices, energy drinks, in diet food and drinks, creamy desserts, in different shapes, and sometimes flavored.

An ingredient derived from coconut water, coconut milk or coconut cream; this is usually processed by extracting the coconut liquids. Fermenting coconut liquid with a bacteria called acetobacter xylinum. The fats are then separated and cut from the Nata de Coco, cleaned and washed off of the acetic acid.  The translucent outcome is actually composed of millions of cellulose threads (fibers) referred to as ‘nata’. Sliced into the familiar squares we see packed in bottle jars to be sold in stores. These products can also be found to be made with sugar syrup, fruit glucose, or aloe vera. A great dessert for those with diabetes and looking for a quick sweet snack when dieting. Possessing a unique flavor, almost like a chewable translucent coconut jelly candy, subtly sweet without the overpowering coconut taste. It’s usually mixed in desserts like halo-halo, yogurt, ice cream, custard, to cold drinks like shakes, smoothies, or juices to add texture, and extra natural sweetness.

Nata de coco might seem like a sweet treat to add into a bowl of fruit salad, or enjoyed over halo-halo, but there is a little bit more to this translucent jelly. While there are no known nata de coco side effects, do note to eat this tasty snack in moderation as some Nata de Coco products use glucose and sugar water.

Becoming one of the favorite ingredients in cream based desserts, drinks, and other desserts, in the Philippines and several countries. Here are some of the ways it’s enjoyed in Filipino cuisine and around the world:

Just remember like all good things, these are to be eaten in moderation. This natural sweet ingredient is healthy, with the consideration of the quantity. You can find these in any grocery store, specifically in the asian section. Check the label to make sure that these are made with or without sugar and other ingredients before making any nata de coco desset!