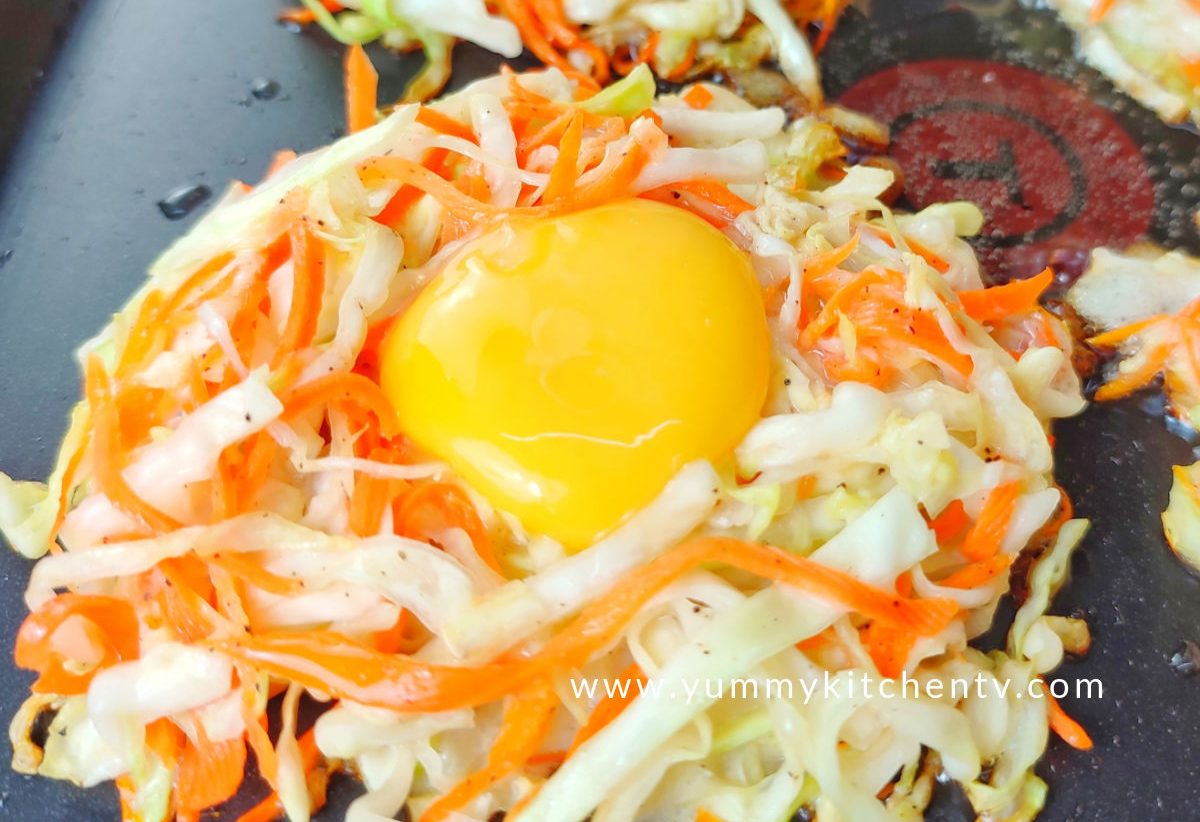 Looking for a healthier pancake dish? This veggie egg pancake is definitely the one for you. Made with your favorite colorful veggies and high quality eggs, this dish is super rich in vitamins, minerals, and protein! Best served with some tea or coffee. Yum!

A pancake is a cake made in a pan. According to the Collins Dictionary, a pancake is “a  thin, flat, circular piece of cooked batter made from milk, flour, and eggs, are often rolled up or folded and eaten hot with a sweet or savoury filling inside and eaten with syrup or butter”.

Pancakes is the staple food in America and the Europe and is very popular in our country. This round flat cake are usually served during breakfast or snacks. Kanto versions of the pancake are usually topped with margarine and sugar.

I believe that any cake made in a pan is called a pancake. I usually eat silog meals for breakfast but there are certain mornings where I crave for pancakes. During these times where it’s too early to buy a ready made pancake mix or I am with inadequate ingredients, it is when I make my veggie egg pancakes.

Basically, the veggie egg pancake is a pancake made mostly with your favorite veggies. I am a big fan of cabbage and carrots so I add them in almost all of my veggie dishes. What I love most about this dish is the presentation since it has an egg yolk in the middle.

This version of the pancake is healthier, more colorful and more flavorful. This snack is best served to kids who likes a lot of colors to their plates. This can also be a good way to increase their veggie intake.

HOW TO MAKE VEGGIE EGG PANCAKE

Believe me when I say that this veggie egg pancake is as easy as eating a peanut. If you have a vegetable cutter or easy shredder, then this quick and easy snack will be ready in no time!

For this recipe, the cabbage and carrots will be our main veggies. If you want to try this recipe with other veggies, just remember to keep the veggies as thin strips so that they can come together easily.

One challenging step on this recipe is separating the yolk from the white. Aside from simply separating them, you have to take care of the yolk not to crack.

After shredding the veggies, let’s make the pancake mixture by mixing the veggies, egg whites and cornstarch. This pancake doesnt need to be runny. What we want to achieve is that they are able to hold themselves together, with the egg whites serving as the binder.

To create the pancake, gently scoop some of the veggie mixture, around half cup, into hot oil. Remember that the cabbage and carrots are slightly thick veggies so it would need quite a time to cook so keep your fire low.

Make a hole at the center, just like a donut. After taking care so much of the separated egg yolk, now it’s time for them to go to their new home. Add a piece of egg yolk to every hole of the pancake. Make sure that the other side of the pancake is cooked by flipping them to the other side. When both sides are cooked, then it’s ready!

I love eating my veggie egg pancake in the morning, just like the regular pancakes. I sometimes drizzle some syrup over it, or have it with some ketchup and rice. From snack to ulam real quick!