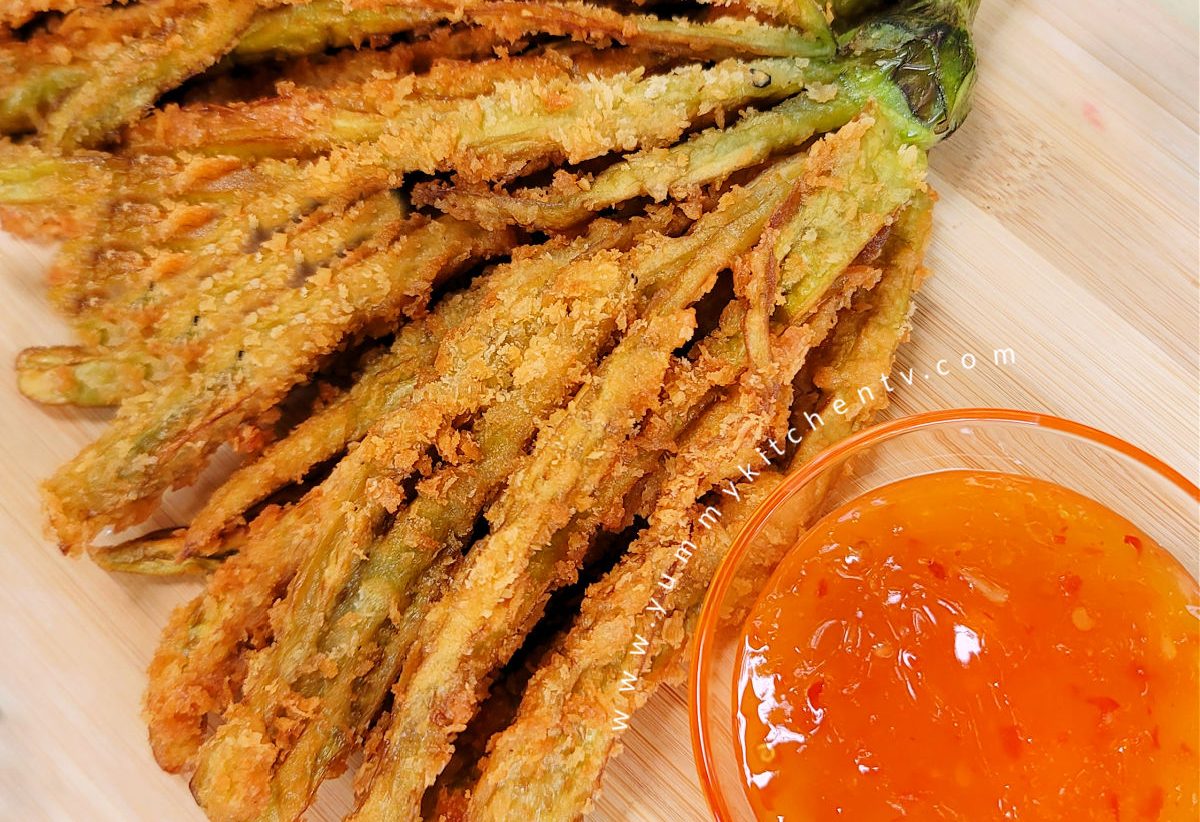 If you’re a fan of eggplant fries, then this recipe is definitely the one for you, especially if you really love having the eggplant fries all by yourself. With this veggie dish, you can shove the whole bunch of eggplant fries into your mouth! Best paired with some sweet and chili sauce. Less frying, more eating! Much healthier than your fastfood fries! Try and make one today! Yum!

WHAT IS AN EGGPLANT?

Eggplant is one of the simplest and most common vegetable you can see at the market. There are a lot of varieties of eggplant in the world but we instantly know one when we see one.

There are only two varieties usually in the country. The first variety was the violet one, which is more common, and the second one is the green one. The violet one is long and thinner than the green one which is a bit chubby and short. Both of them taste the same. People use them for different purposes relating to the size. For example, we are going to use the violet one for this dish since we need long eggplant sticks. The green ones are usually used for mixed sauteed veggie recipes.

Eggplant has been used in a lot of dishes like fried eggplant, tortang talong, sauteed eggplant, eggplant parmigiana and many more. This recipe will show you how to make crispy eggplant.

I am a fan of fries. I buy Mcdonald’s BFF fries all for myself. Since their removal of the BFF fries on the menu due to the worldwide potato shortage, of course I became sad. I took it as a sign to change my eating habits into healthier ones. Say bye to fast foods! Time to make some fries at home.

To be honest, what I really love about this crispy eggplant is that you can shove that whole bunch of eggplant fries on your mouth at once! And what’s better is that eggplants has less calories than potatoes which are used for the usual fries. Although fried, this crispy eggplant recipe has less guilt than fast food fries!

I love preparing this crispy eggplant as an afternoon snack. Because it can be cooked as a bunch, one eggplant can already serve a lot of people. Who knew eggplants can feed much people?

If you wanna know how to make some crispy eggplant, read and follow the simple steps below. Happy cooking!

HOW TO MAKE CRISPY EGGPLANT

Making crispy eggplant fries is much easier than the usual fries. Instead of cutting them into sticks, we’ll have them fried at once. Super convenient, right?

Lets start by preparing the eggplant. For this recipe, we will be using the long and large violet ones instead of the green and short ones. Grab a bunch from the market and peel them one by one. Remember not to cut the stalk, as this will be the one holding the eggplant sticks all together. Slice them vertically to turn them into long large and thin sticks. If you will be dealing with a lot of eggplant, soak them in water just to prevent them from darkening.

The next thing to prepare is our coatings. We will only use egg mixture and breadcrumbs for this one. To make our dish extra flavorful and crispy, let’s add some flavor to the egg coating. For this recipe, I added the usual salt and pepper and a half of chicken broth cube. If you have other herbs and spices which you would like to use, feel free to do so. Lastly, add the cornstarch instead of flour to make it extra crispier. Just make sure to mix the egg until there is no lumps.

Next is to dip them into the breadcrumbs and then fry in oil. You can turn them for a couple of times to make sure that they are cooked evenly. When golden brown in color, then it’s done!

I love  my crispy eggplant with some tomato ketchup. You can try it with a variety of sauces too. Yum!