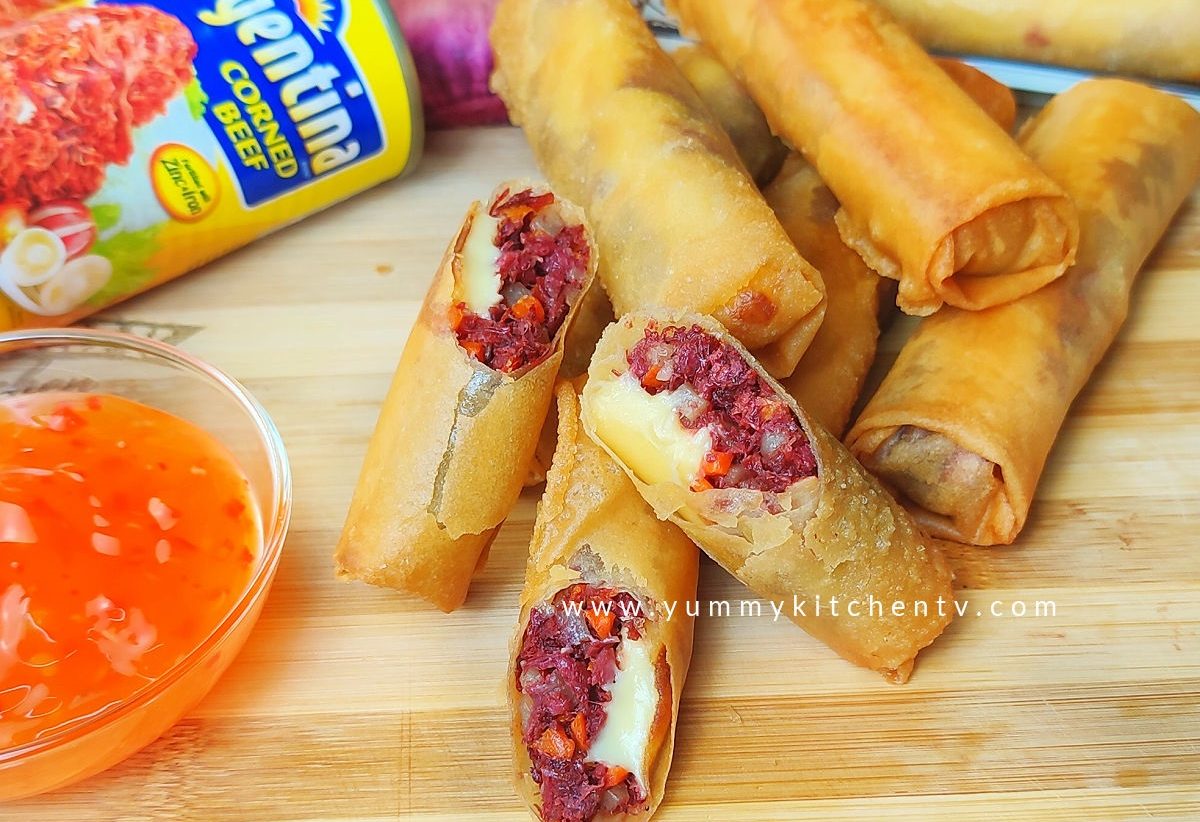 Cheesy Corned Beef Lumpia is is a variation of popular Beef Lumpia pf Philippines, by using canned corned beef and other Lumpia fillings. It is made by wrapping a cooked mixture of corned beef, minced potato, minced carrot, cheese with onion, garlic, bell pepper, fish sauce, sugar and salt, in a lumpia wrap and frying it on oil, If you’re a fan of cheese and corned beef, then this recipe is the perfect one for you. Have them wrapped and fried in a crispy lumpia wrapper to experience the meaty goodness of the corned beef paired with the creaminess of the cheese. Best eaten as a snack or an appetizer, and of course, with some hot steaming rice. Yum!

WHAT IS A CORNED BEEF?

When I was young, I though there was both corn and beef in the can of corned beef. I can still remember arguing with my mom on why it is called corned beef when there is no corn. If you are also curious on how corned beef got its name, then let’s go back to the history of corned beef.

Just to clear out the curiosity, there was never a corn in the corned beef ever since. Since the invention of the canning process during the 17th century, many food items are canned to preserve them for quite a time, initially for the army and navy consumption.

Beef was also canned but instead of “canned beef” they are called “corned beef”. Instead of the usual salt for preservation, the salt used for the processing of canned beef are called “corns”, since they were the size of corn kernels. You might be disappointed that there is no real corns in the corned beef but at least, you know how it got its name.

Corned beef is our lazy food. It is our go-to dish whenever we do not have the energy to cook much. With simple sauteing, you can enjoy your corned beef with rice.

Quick note: Some people eat canned foods straight out of the can. It is recommended to cook them or have them microwaved first before eating.

Before, corned beef is just corned beef. Many competing brands but still plain corned beef. Now, corned beefs are getting more and more palaban. Corned beefs now have cheesy version, afritada, caldereta and many other versions. This also makes corned beef a meat alternative if you want less preparations with the meat.

One hack for this is to make them into lumpia. With the same portions of cheese and corned beef in  one bite, no cheese can be kidnapped anymore!

If you wanna know how to make some cheesy corned beef shanghai at home, read and follow the simple steps below. Happy cooking!

Mixing the savoury flavor of the corned beef with the creaminess of the cheese into a lumpia dish is incredibly easy. If you have tried making any shanghai dish in the past, then this recipe will be familiar to you.

For this recipe, you may use any type of corned beef you want. There’s a variety of brands you can choose from. Just get the one that fits your budget. First, we are going to make the corned beef toasty. As you open the can, there corned beef is a little saucy so we cook it for a few minutes (no oil) until the sauce had dried up. Toasting also unleashes a yummier taste for the corned beef.

The next thing to do is to prepare the rest of the ingredients. You can add other veggies that you want but for this recipe, I added some carrots and potatoes. Try to get them as chopped as possible except for the cheese, which must come into strips so it can be well distributed within the shanghai. Cook the fillings first until they come together before wrapping them into lumpia.

The next steps would only include wrapping, rolling and frying the cheesy corned beef shanghai until they are brown and crispy. Since our lumpia is naturally salty, I really love having this shanghai with some sweet and sour dipping sauce or with the special suka.