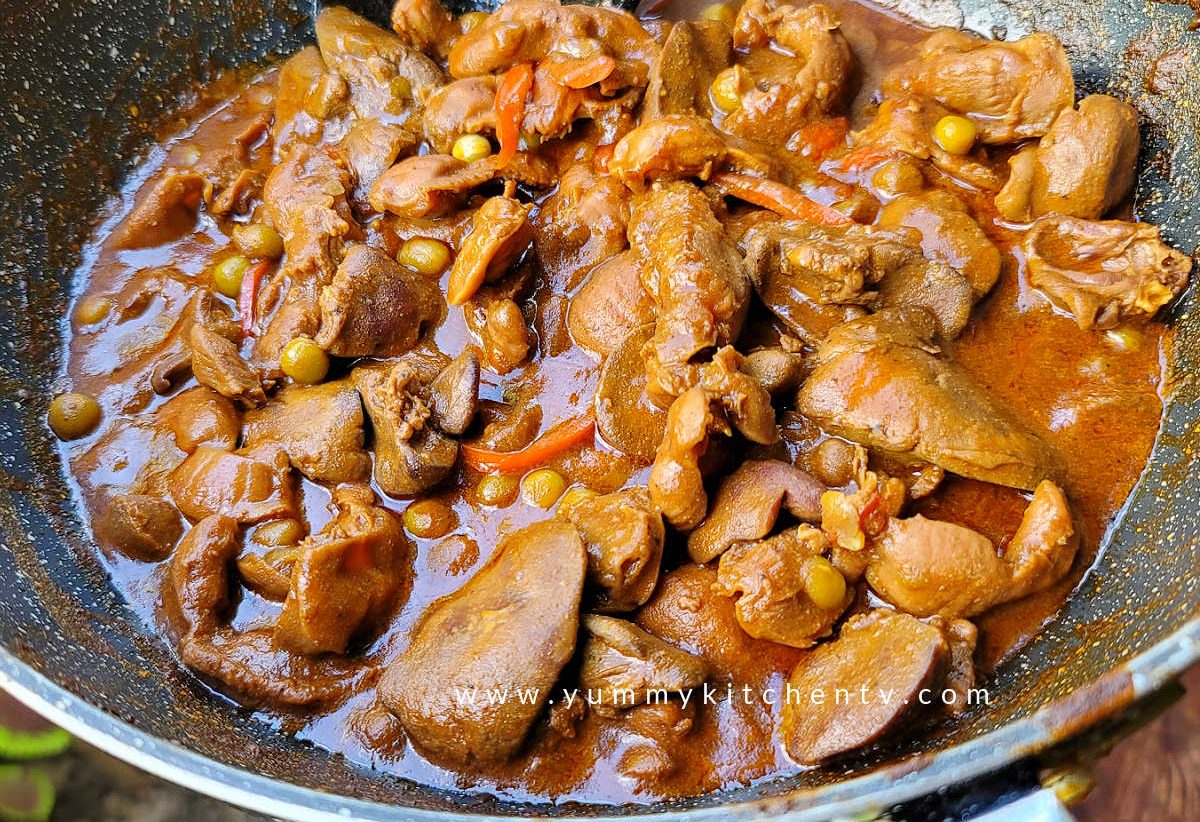 Sinarsahang Atay at Balunbalunan is a popular chicken liver and gizzard recipe made by sauteing liver and gizzard with soy sauce, pepper, onionm, garlic, tomaro sauce, green peas, lemon soda and red chili. With tomato sauce, green peas and bell peppers, this dish deserves to have a spot on your menu! With alternating textures of smoothness and chewiness. This yummy kitchen recipe will guide you step by step to make this scrumptious Sinarsahang Atay at Balunbalunan for you.

WHAT IS ATAY AND BALUNBALNUNAN?

Fun fact: Did you know that only bird species (chicken, duck, turkey, etc) have gizzard? Even humans don’t have it!

Liver is a type of innard which is very soft when rare, and becomes firm and crumbly when cooked. Not all people is a fan of liver because it has a sandy and metallic taste. Meanwhile, the gizzard is a chewy and rubbery type of meat which is why it is needed to be fully cooked to be tender. If you haven’t seen a gizzard, it is the one which looks like the letter “S”.

Liver and gizzard always almost comes together in many dishes. They are usually cooked as adobo, stir fried, and grilled. In this recipe, let’s explore another type of recipe that uses liver and gizzard  which you will surely enjoy.

Usually, I cook my liver and gizzard as adobo. But since I had just prepared some adobo lately, I had thought of a dish which will really highlight the natural flavors of this liver and gizzard. Since I’ve got some tomato sauce in my pantry, why not just simply add some sauce to it? A tomato-based sauce will surely be perfect especially for the liver.

Whether you’re a liver lover or not, sinarsahang atay at balunbalunan will surely amaze you! If you wanna know how to make some of this dish, read and follow the simple steps below. Happy cooking!

Making sinarsahang atay and balunbalunan is very easy compared to the other tomato based Pinoy dishes.

Just like any other meat, let us marinate the liver and gizzard first. For this recipe, I used simply lemon soda and soy sauce. The fruity sweetness of the lemon soda will help extract the natural flavors of this dish and will help tenderize the meat, especially the gizzard.

The first part of this recipe is sauteing the gizzard and the liver. But take note that the liver becomes crumbly and dry when overcooked. So after a few minutes, remove the liver from the pan and just let the gizzard cook on its own.

Do not waste the flavors from the marinade and lets use it as the sauce base. When the gizzard is already tender, you can now add the liver back to the pan to let it absorb the sauce. Add the tomato sauce and the rest of the ingredients. In this recipe, I added green peas and red bell peppers for color and flavor. You can also add other veggies you like such as potatoes and carrots.

I really love having sinarsahang atay at balunbalunan as a topper for my hot steaming rice. Sometimes, we make this dish spicy, cut the meat into smaller pieces and have it as a pulutan with some ice cold beer. Enjoy this dish however you want. Yum!