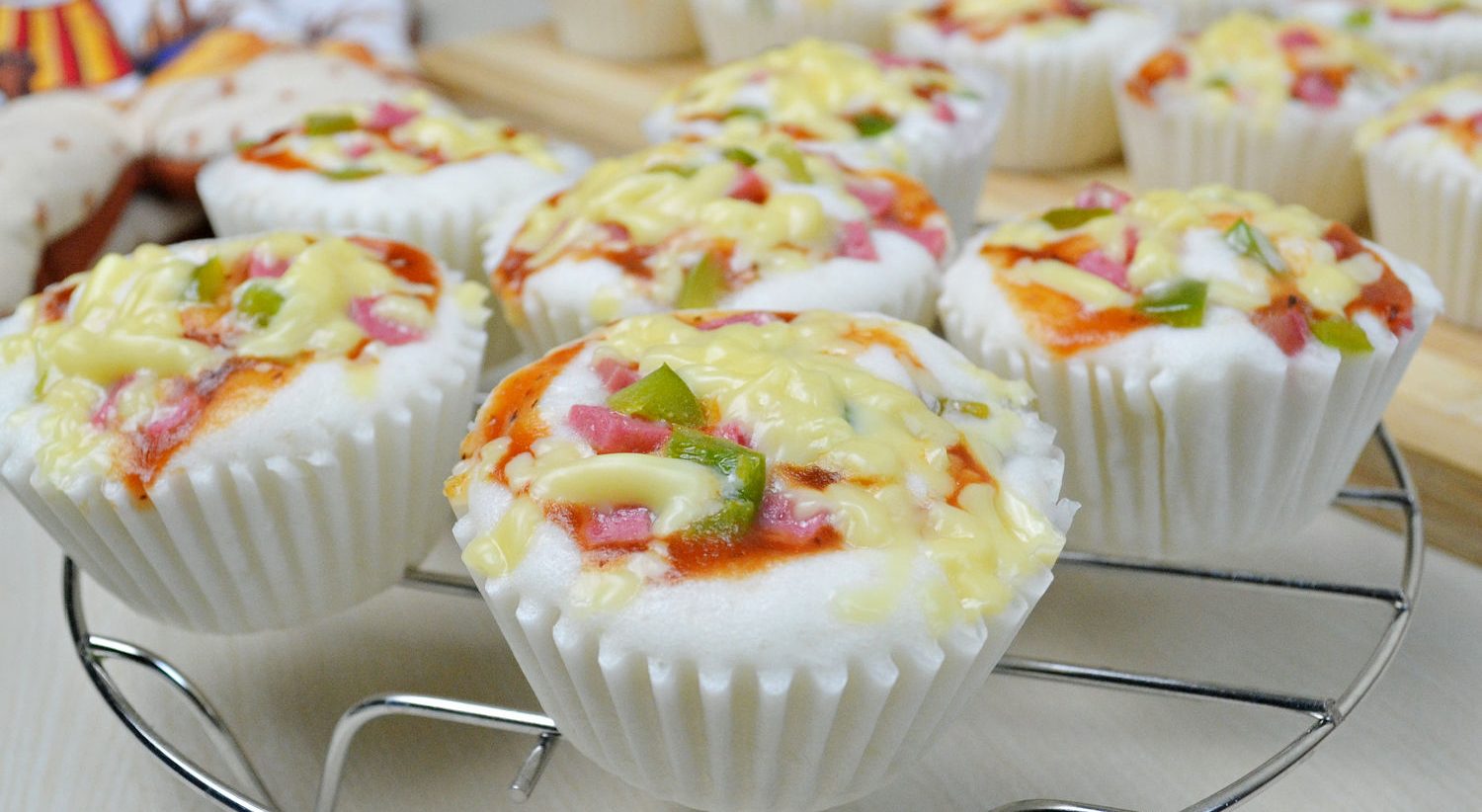 Puto Pizza is a trendy version of one of the Filipino’s most favourite snack, the classic puto or steamed rice cakes. It is called puto pizza because it is enhanced with pizza flavors on top, particularly the sauce, ham and cheese. Puto is traditionally made with rice flour and coconut milk. Puto is an umbrella term for “kakanin” particularly made with rice flour. But now, versions of puto and other kakanin made without rice flour are available.

I have been eating puto ever since I was a child. They were my very first concept of cakes. I remember those times when I was a child, the sound of the horns of the kakanin sellers roaming around our community every morning was my alarm. I rushed to buy a lot of puto and kutsinta. What I love about puto is they are small and easy to hold snack for a child like me.

Whenever there are potlucks in our school, I always bring a tray of puto. It is easy to carry and is almost always available any time of the day. My love for puto got stronger as they start decorating the puto. I love the colored ones especially the pink and violet ones. And they’ve all got cheese on top! Another version of the puto I love is the puto pao. I remember naming it “cake siopao” because it has siopao fillings inside.

Puto generally tastes lightly sweet to bland and the texture is relatively dry compared to a cake. This is the reason why people are getting creative on what to combine with the puto as you eat it, or what stuffing or filling should you add and what toppings should be put. I usually eat my puto with dinuguan.

I discovered all about the puto pizza while I was scrolling through the internet. It looked so good!! Who would have thought of using puto as a pizza crust? I immediately went to the grocery store the next day to buy some ingredients for my puto pizza. I was excited to try a complicated pizza flavor but decided to first try it with the basic ones. The first batch of first attempt failed because the toppings sank into the middle of the puto and the resulting ones doesn’t look good. I adjusted the amount of toppings for the next batches and I made a perfect puto pizza. It took me a while to prepare the batter and the meringue but the steps after that were much easier.

HOW TO MAKE PUTO PIZZA

The puto batter will basically be the structure and base of the puto pizza. Based on research, the traditional puto recipes use rice flour but in this recipe, we will use cake flour. The use of cake flour contributes to the lightness and soft texture of the resulting puto. Prepare the puto batter by sifting the cake flour and baking powder. Sifting is done to remove lumps. Add the white sugar. Mix the ingredients well before adding the water. Pour some water gradually while stirring the dry ingredients. Set the batter aside for a while and prepare the ingredients for the meringue.

The meringue gives additional softness and airiness to the texture of the puto. A meringue is prepared by whipping egg whites until they are foamy. Grab you egg whites and whip them in a large bowl using a hand mixer. Add the cream of tartar and blend it with the egg whites. In baking, cream of tartar is used as a leavening agent which causes the puto to rise and expand. It also adds to the creamy texture of the meringue. Add the white sugar while stirring with the rest of the ingredients. Whip the mixture until it reach stiff peaks. To check if the egg whites you are whipping are in stiff peaks, try to turn the bowl over. If the egg whites does not drop, then it has reached the right stage. The meringue is now done.

There are a lot of options for pizza toppings anyone can think of. In this version of puto pizza recipe, we will use the pizza sauce, precooked ham, sliced green bell pepper and grated cheese to resemble a cute ham and cheese pizza. You can use other pizza references to have more ideas on the other pizza toppings you can top your puto pizza. The puto pizza will be cooked using the steaming process. If you would like to add toppings which requires cooking such meat, it would be recommended to cook them first before adding on the top of the puto pizza.

The puto batter is thick but you must still need to be careful in adding the toppings. Pour some of the pizza sauce very slowly above the puto batter. Take note to pour it very gently since the puto batter is still soft. Do not over pour the toppings. A heavy top may sink in the middle of the puto. It would ruin the general appearance and you would not want that for your puto pizza. For the pizza toppings, chop them into small pieces so that some pieces can fit one puto pizza top. Add and decorate the other pizza toppings how you like.

Like the classic puto, the puto pizza is cooked through steaming in batches. The recommended tool in steaming the puto is the metal steamer pan and not the electric steamers used in dimsums and dumplings. The classic metal steamer pan is like a giant pan with 2 layers divided by a stainless metal divider with holes. You boil water at the bottom and let the steam pass through the holes of the divider into the puto pieces.

Watch how to Cook Puto Pizza