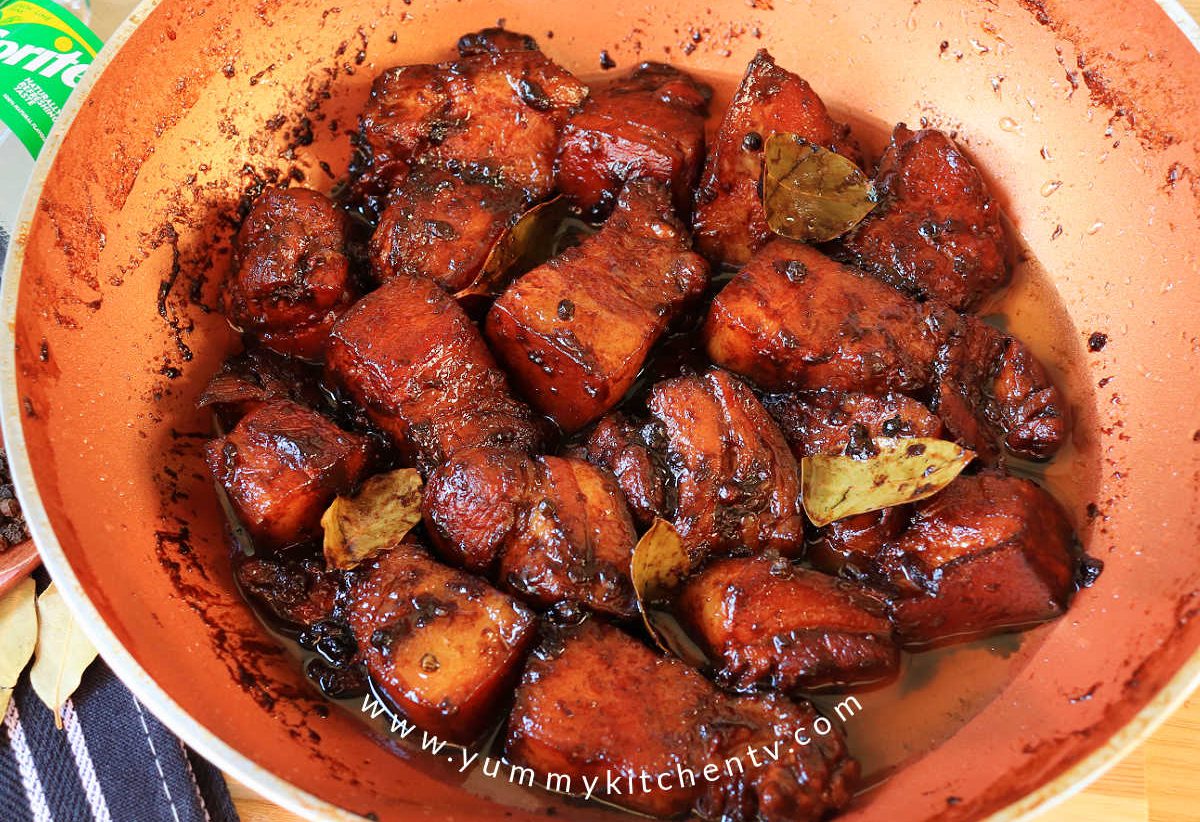 Pork Adobo with Sprite is a sweet version of Filipino adobo made by cooking pork pieces in a sauce made with soy sauce, vinegar, pepper, garlic, onion, bay leaves, sprite and water. This dish is tangy, sweet and savoury with balanced flavours from the soy sauce, vinegar, aromatics and of course, the lemon soda. Pork Adobo with Sprite is best served during lunchtime with a whole pot of hot steaming rice! Totally winner, Filipino dinner!

WHAT IS PORK ADOBO?

The word “adobo” is actually a way of cooking wherein meat is simmered in a mixture of vinegar, soy sauce and garlic. This is the real traditional way of making adobo dishes, commonly with chicken or pork.  Fatty pork cuts are usually used which is neutralized by the acidity of the vinegar. Modern versions of adobo also includes onions, which became one of the staple aromatics aside from garlic, and sliced potatoes.

Adobo is a super easy dish without needing any fancy ingredients. Whenever we ran out of pantry ingredients, we resort to cooking adobo since it involves only the basic Filipino condiments. With the simplest ingredients, pork adobo remains one of the crowd’s favorite and definitely one of my comfort foods.

Making pork adobo with the magic of sprite follows the same steps on how to make the classic adobo you know. You may use any pork cut you like. In making this adobo, I would highly recommend pork cuts with both lean and fat parts, such as the liempo or pork belly. The fat will later melt and this natural meat oil will contribute a lot to the flavor of this dish.

To start, marinate the pork cuts. The marinade will also be our sauce base for later. Sear the pork to seal the juices inside. Browning the edges will also add a bit smoky flavor. Remove the pork from the pan and sauté your aromatics. Add the seared pork, marinade, the sprite and the rest of the aromatics. Let it simmer until the pork is tender. If you want “nagmamantikang adobo”, continue cooking for a longer period using high heat. Prepare a lot of rice because this dish will unleash the hungry you!