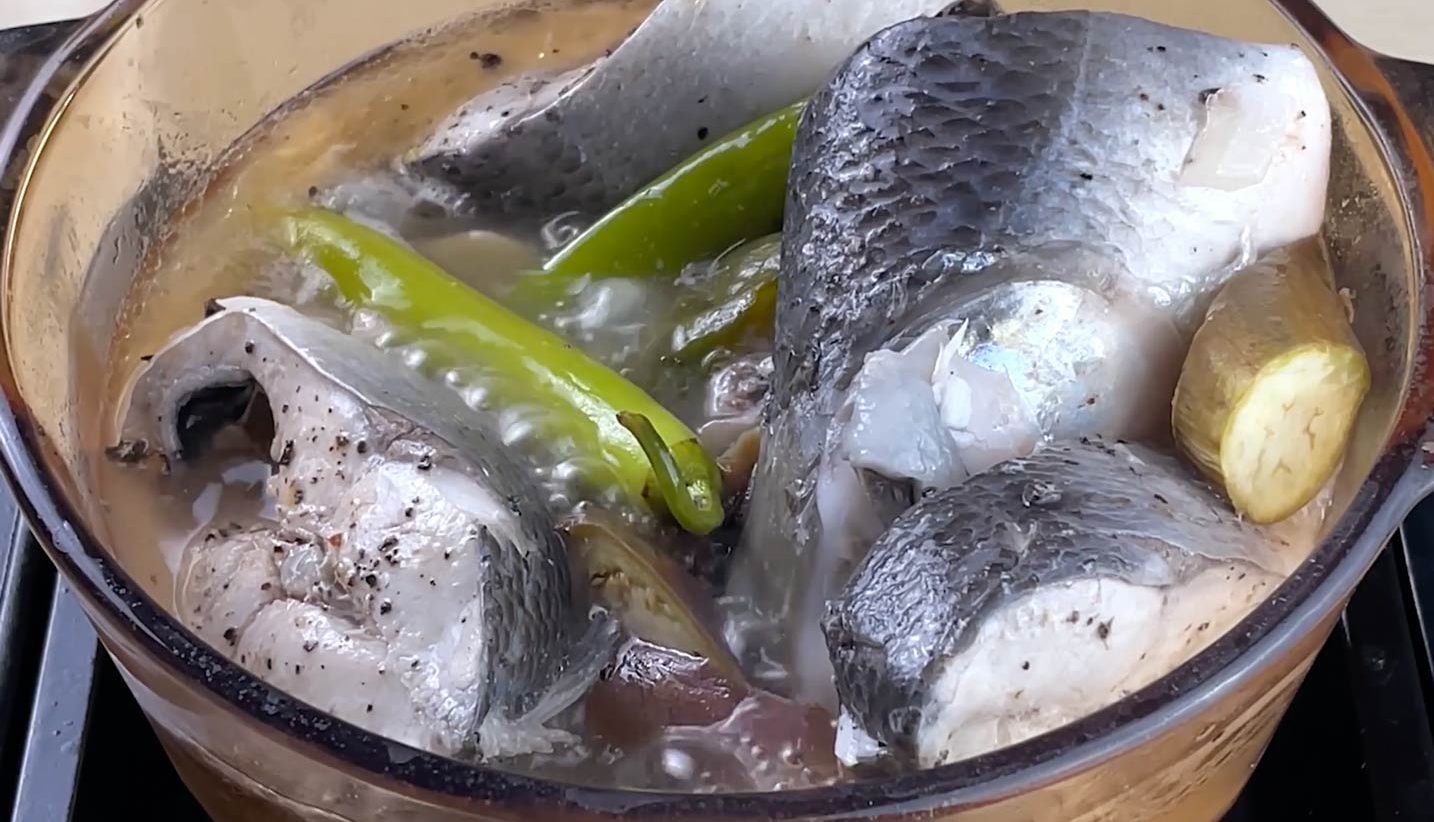 Paksiw na Bangus is a fish dish cooked with onion, garlic, Ginger and stewed in a vinegar mixture, that consist bitter gourd, eggplant, fish sauce and green chili, to get that tangy, salty and sour deliciously addicting main dish that’s perfect with a side of steaming white rice. Health conscious but craving for something salty and sour? Satisfy your craving with this effortless but intensely flavored fish dish. This dish only requires a minimum amount of basic ingredients and just a few minutes to prepare.

Paksiw is a Filipino cooking method there the seafood or meat is simmered or cooked in a vinegar and garlic concoction. This can also be related to the ‘Pinangat na isda’ that takes it’s sour flavor from calamansi, tamarind, or bilimbi also known as kamias instead of vinegar to get that sour flavor. Similar to adobo but with a lot more vinegar and without spices or seasonings that makes adobo what it is, like bay leaves and soy sauce. This method gives the meat or seafood a nice tangy, sour taste that tickles your taste buds and keeps you asking for more. With three categories of Paksiw like ’Paksiw na Pata” or pork leg simmered with vinegar, “Lechon Paksiw” using roasted suckling pig, and the Paksiw na Isda is a variety of Fish Paksiw where Paksiw na Bangus falls under. The most popular version ‘Paksiew na Bangus’ or milkfish isn’t just easy to prepare it also doesn’t need a long period to cook.

How to cook the Paksiw na Bangus?

Milkfish is a staple fish in the Philippines. The Philippines is surrounded by three prominent bodies of water and is one of the major fish producers in the world. Bangus being a common choice for the Paksiw dish, can also be replaced with fishes like Tilapia, Dorade or a Gilt Headed Bream, or Galunggong also known as a Blue Mackerel Scad.

For this recipe, all you need is at least 20 minutes and a few minutes for preparation and you’ll be presented with a wonderfully infused fish dish with a slightly salty flavor and a deliciously sour and interesting taste that you’ll find yourself loving each bite. It starts with the milkfish being cleaned and sliced to parts. This is then rubbed and seasoned with salt to help the flavors intensify once its cooked. Then prepare a pot and sauté some onions and garlic with ginger to give that nice aromatic flavor common to many Filipino dishes. Add the milkfish on top and pour water, letting this simmer for a few minutes just to bind the entire flavors together and cook the fish. Vegetables like bitter gourd, eggplant, and other vegetables that you’d like to add is placed inside, vinegar our main ingredient aside from the fish is added. Vinegar is a good way to get that tang and sour flavor, it also helps preserve the dish well when you want to keep it for a long time, cooking oil, and fish sauce, with some chilies. Chilies give the dish an extra heat as well as make it even more appetizing as spicy food does make you want to eat more. Everything is all simmered together till the vegetables has soften and the fish is tender. Have a taste to add salt or even sugar to adjust the taste to suit your own. Pair them with rice to really soak up any sauces.

With a million of Filipino dishes and even sauces with a hint or a lot of vinegar added. This Paksiw na bangus is one you should try! Make yourself a healthy bowl of fish with a tangy spicy sauce that will leave you wanting more.

Paksiw is a wide arrange of sour dishes using meat or seafood namely fishes. It’s a common choice for a quick dinner or lunch meal. It’s also a great cheap dish as even a bite of the sauce or the bangus or milkfish infused with the sauce will already leave you biting a lot of rice. It’s versatile enough to add and change in the vegetables, and sometimes add some sili to change it up and give it some heat, adding sili or chili also neutralizes the fishy smell. Let your senses fly high with this delicious mix of vinegary goodness.