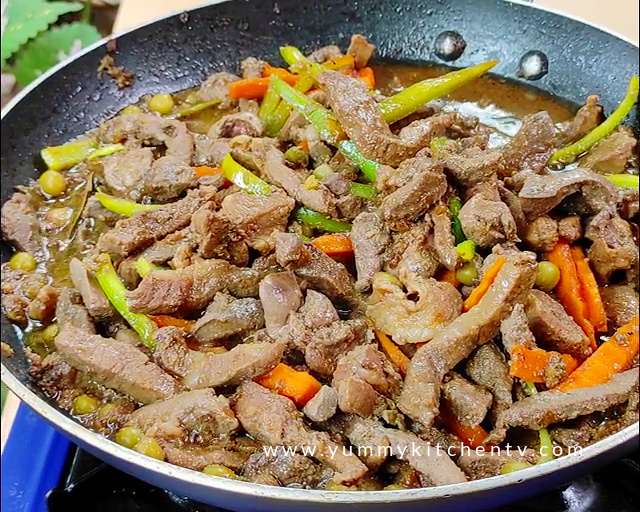 Igado or Pork Liver Stew is originated from the northern part of Luzon but is widely enjoyed in all parts of the country. Marinate pork strips in soy sauce, then fried in medium heat in oil with minced onion, garlic, vinegar. Then add bay leaves, pork liver strips, green peace, carrots, bell pepper and season with salt and pepper. The lean pork, liver, green peas and bell pepper combination makes this dish one of the best toppers for hot steaming rice. Yum!

It’s a shame that not all of us is a fan of pork/chicken liver. The liver is a type of organ meat which is very nutritious especially in iron. It has a grainy texture when chewed with a slightly metallic taste attached to it.

Pork liver is the special ingredient which will make our igado super special. Although some igado omit the liver (which is sad), it was wonderful that all of us in the family enjoys it. Igado is one of our fave ulams especially during dinner.

When I first heard about this dish, I thought that it is one of the usual “iga” dishes or those that the sauce dried up. After actually eating the dish, I learned that igado, or higado, originally came from the Ilocos region and other parts of North Luzon. While some versions I’ve tried were actually dried up, one defining characteristic of igado is that all ingredients used in this dish are cut into strips.

Also, it was the pork innards which were originally used when preparing this dish. This made me think that this was one of the relatives of our favorite dinuguan.

I usually cook this dish during dinner time or busy days when I have low energy to cook but still wants to eat good food. The lean pork may cook for a while but all I needed to do most of the cooking time is to simmer it. A few minutes before the igado finally cooks, I set up my rice cooker to have the igado and hot steaming rice ready at the same time.

This dish is not just convenient to cook but is also convenient to eat. The pork is boneless and there are no parts to be cautious about. Simply scoop them with hot rice and enjoy. Yum!

Igado is very easy and simple to make. One distinct characteristic of this dish is that all ingredients are cut into strips. Before we start, it would be more convenient if the ingredients are already prepared.

To start, marinate the pork strips in soy sauce. Imagine the umami which will transfer from the soy sauce to the pork!!

The next steps would involve sauteing the pork. Do not discard the soy sauce. Once the pork is sauteed, add the marinade back to the pork and let it simmer. The pork will take quite a time to become tender. This will take around 10 minutes. Next, add the pork liver strips. Some versions omit the pork liver but the liver is the one that actually provides unique taste and texture to the dish. The last step would be adding the rest of the ingredients and letting them simmer until they come together to a beautiful dish.

Transfer the igado to a serving plate. I sometimes add some chilies when I serve the igado as as a pulutan with some ice cold beer. Still best when partnered with hot steaming rice! Enjoy!